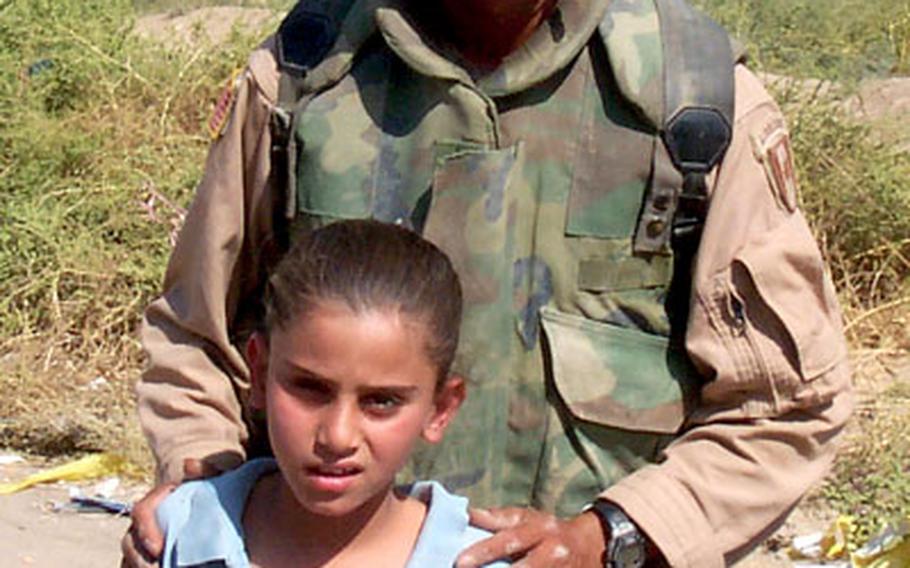 U.S. Army Staff Sgt. Thanh Phan of the 57th Medical Company stands with H’ora, a 7-year-old Iraqi girl, outside the Camp Warhorse main gate before her recent surgery to implant a glass eye. Phan paid for the purchase and surgical implant of the eye. (Courtesy of U.S. Army)

She now has matching brown eyes after Phan spent $125 for a new glass eye and the surgery to put it in.

She was selling small, inexpensive trinkets to the soldiers.

&#8220;It was very unusual to see a little girl actually trying to sell stuff like that,&#8221; he said. Women or girls usually don&#8217;t work the markets outside the gate.

Three days later, Phan returned to the gate with a treatment for the skin problem and questions about how the girl lost her eye.

A vendor, speaking in broken English, told Phan that she lost it as the result of a gunshot.

H&#8217;ora&#8217;s father, he added, was killed by the Saddam Hussein government and her mother is raising their three children alone.

When the Americans arrived at Warhorse, about 60 miles north of Baghdad, members of the family turned to selling whatever they could get their hands on to the soldiers outside the gate.

The family still sometimes has a hard time raising $25 for the monthly rent and moves frequently as a result.

In 1975, when he was 10, his mother fled Vietnam by boat with her three children. His father, a South Vietnamese soldier, had been killed in battle three years earlier.

They ended up settling on the American territory of Guam. Phan graduated high school there and joined the U.S. Army.

Now, nearing the end of his career, Phan is assigned as the senior enlisted member of a three-helicopter, 16-soldier forward medical evacuation team.

They are, he says, the best soldiers he&#8217;s ever worked with. In six months, the unit has flown more than 150 wounded soldiers from the battlefield to hospitals.

Phan had originally been concerned that H&#8217;ora&#8217;s eye had been lost to disease. Once he knew it was from a trauma injury, he could more easily pursue getting her the glass eye.

Phan asked an Iraqi doctor who works nights at the camp hospital to find out how to purchase a glass eye for the girl.

Two weeks ago, the doctor got him the information, and last week H&#8217;ora&#8217;s mother took her to Baghdad for surgery.

They returned to Warhorse last Friday to show Phan the results.

The mother told Phan that she would pray for the American forces&#8217; safe return to their families back in the United States.

Phan said he felt it was the least he could do.

Phan, who doesn&#8217;t have children of his own, said he wants to continue to help H&#8217;ora. He&#8217;s working with the camp forward support battalion&#8217;s adopted school in nearby Baqubah to get her enrolled in classes for the first time.

Other members of his unit aren&#8217;t surprised that Phan has been looking after H&#8217;ora.

The unit is expected to rotate to Tikrit, where its parent 56th Medical Battalion is based, so Phan is working hard to get everything in place now.

Until then, Phan will continue to help the family.