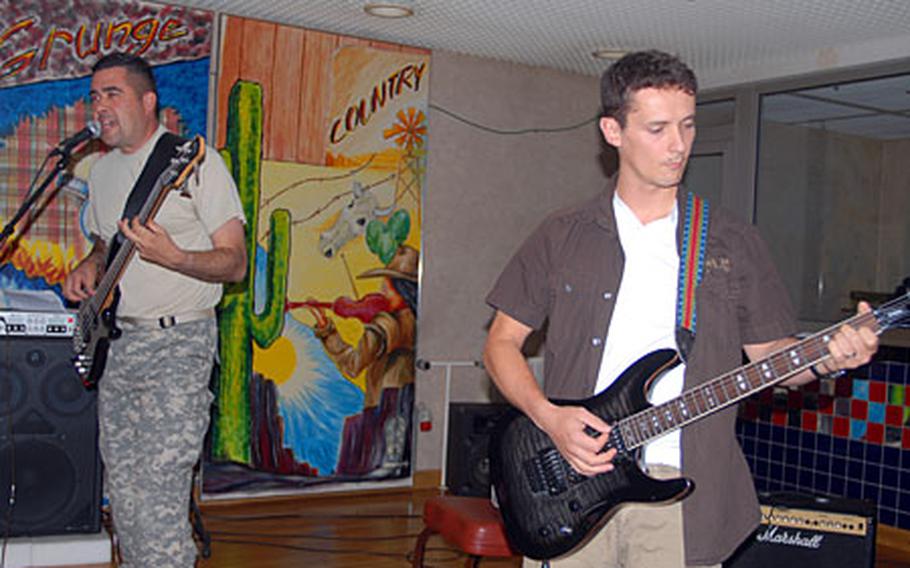 VILSECK, Germany &#8212; In this live-entertainment-starved part of Germany, a pair of soldier guitar players who honed their musical skills on tours to Iraq and Afghanistan are bringing a little rock &#8217;n&#8217; roll nourishment.

Master Sgt. Mathew Cervantes and Maj. Adam Schlang teamed up with three other Americans at Grafenw&#246;hr to form The Expats and deliver classic rock, blues and heavy metal at local gigs.

But how many guys take a bass guitar to Iraq or Afghanistan? Cervantes, who started playing four years ago, took an acoustic bass guitar with him on both missions.

&#8220;I kind of sucked back then,&#8221; he admitted, but he said he never had a problem finding people to play with downrange.

&#8220;We would jam around our camp because there are always guitar players,&#8221; said Cervantes, who writes songs on his bass and likes to hammer out riffs from Geezer Butler of Black Sabbath and Cliff Burton from Metallica.

Schlang has been playing guitar since 1992 and had two guitars shipped to him in Iraq.

&#8220;I started playing Metallica and Slayer and then got into classical guitar,&#8221; said Schlang, who has never had a lesson.

The Expats have played only a few live gigs so far and hope to bring their sounds to some of the off-post bars and clubs around Grafenw&#246;hr and Vilseck.

&#8220;I love almost everything about German culture, but they are hurting when it comes to live music. There is very little live music in bars around here.&#8221;

Expats singer Kris Sharon, a civilian working with the Joint Multinational Training Command at Grafenw&#246;hr, said the band has played twice in the nearby town of Kaibetz and once at a JMTC party.

It has also been asked to play at The Zone, the on-post sports bar at Vilseck, he said.