GI flagged for public comments about his Abu Ghraib experience 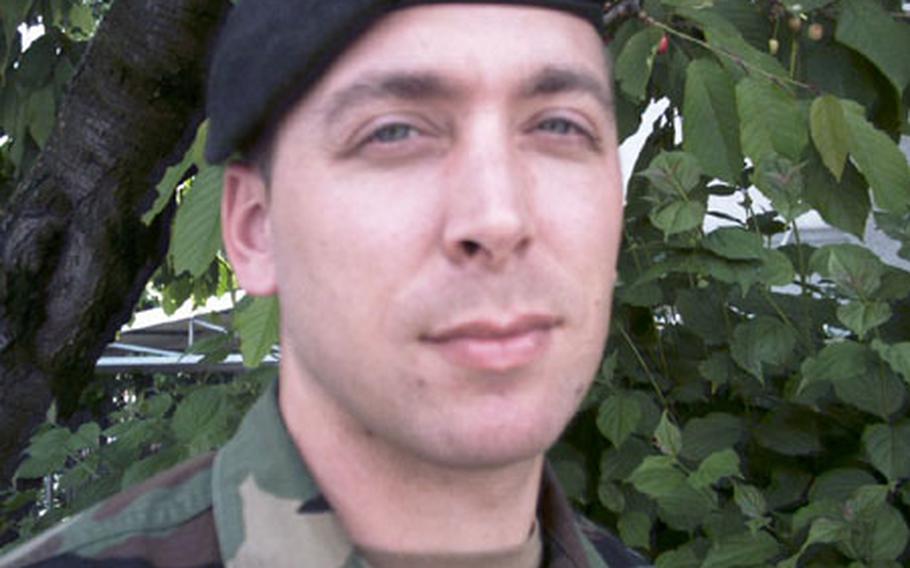 HEIDELBERG, Germany &#8212; Sgt. Samuel Provance said he wasn&#8217;t surprised when Lt. Col. James Norwood summoned him to Wiesbaden on Friday, less than a week after the sergeant spoke to ABC News about his experiences at the Abu Ghraib.

Provance is the only military intelligence soldier who served at the prison to publicly speak about prisoner abuses there, despite orders from his command to keep quiet.

Now, Norwood, his battalion commander, has flagged Provance from favorable actions and pulled his top-secret clearance.

On May 16, the 30-year-old Williamsburg, Va., native told ABC News that fellow military intelligence agents casually discussed their part in prisoner abuses. Provance also discussed what he feels are the Army&#8217;s subsequent moves to discourage soldiers from speaking out.

Just two days earlier, his company commander, Capt. Scott Hedberg, ordered Provance to keep quiet about Abu Ghraib, according to documents obtained by Stars and Stripes. Provance signed a statement in which he agreed not to talk to the press.

But the following Friday, he was in front of Norwood, who commands the 302nd Military Intelligence Battalion. Norwood told Provance that he was being flagged, which means he cannot receive any favorable actions such as promotions or awards, and pulled his security clearance. He then gave Provance a second order not to talk about Abu Ghraib, according to documents Norwood signed.

In January, when Provance filled out a questionnaire given by Army investigators to troops at Abu Ghraib, he wrote that he may know about prisoner abuses.

He later told investigators that fellow military intelligence soldiers played a part in prisoner abuses, based on conversations he had or overheard while stationed at Abu Ghraib. His statement was referenced in Maj. Gen. Antonio Taguba&#8217;s report of his investigation into alleged abuse at Army prisons in Iraq.

Provance provided phoned testimony to an Article 32 hearing for Spc. Megan Ambuhl, one of the MPs charged with dereliction of duty and conspiracy.

In addition, Provance, along with other soldiers who were at Abu Ghraib, were summoned to Darmstadt on May 11 to discuss the prison issue with Maj. Gen. George Fay, a senior intelligence officer assigned by the Pentagon to further investigate any role that military interrogators had in prisoner abuses.

Fay told Provance at that meeting that he &#8220;could have busted this thing wide open&#8221; if he reported the talk of abuse sooner, Provance said.

Fay implied that Provance could face charges for not speaking up sooner, Provance said.

Stripes&#8217; attempts to reach Fay were directed to Maj. Scott Bleichwehl, press officer for Multi-National Corps Iraq. In an e-mail from Baghdad, Bleichwehl said he could not comment on the case until the investigation in complete, which could take an additional two weeks.

Provance arrived at Abu Ghraib prison in September to replace soldiers killed in a Sept. 20 mortar attack. At the prison, he was in charge of maintaining a secure computer satellite link used by interrogators to swap top-secret information gathered from detainees.

But Provance caught wind of abuses in a low-tech way &#8212; troops chatting about how prisoners were handled. He recalled one Army specialist talking to some buddies about prisoner abuses at the mess hall.

Because his name was mentioned in Taguba&#8217;s report, the media began looking for Provance. From Virginia, his mother told him that ABC News was trying to reach him.

He dropped their editor a line with his contact information, and he mentioned it to his platoon sergeant.

On May 14, he was called to the company first sergeant&#8217;s office. Few words were exchanged, but Hedberg and 1st Sgt. William Palenik ordered him not to talk about Abu Ghraib, Provance said.

Hedberg ordered Provance not to use e-mail or Internet chat rooms to discuss the investigation. He was prohibited from speaking or writing to members of the press and fellow troops not part of the investigation, according to documents.

Provance then signed a statement that he wouldn&#8217;t talk.

Provance said he signed the statement because he thought it merely meant that he understood what Hedberg had written and acknowledged receipt.

He said he did not agree with it, but now understands that it appears so, by him signing. In fact, the form has a block that Provance checked that states, &#8220;I agree.&#8221;

Despite the meeting and gag order, Provance decided to talk to ABC News because, &#8220;I knew what was reported up until then was not true, that it was all on the MPs,&#8221; Provance said.

On May 16, he met ABC reporters at a local restaurant in Heidelberg. Before long, he was staring into a video camera, answering questions from a stateside reporter over the phone.

After that, media requests flooded in. Provance told his story again and again, &#8220;telling them anything they wanted to know,&#8221; he said.

Only a small portion of ABC&#8217;s hourlong interview aired May 18, Provance said. It ran late at night on the American Forces Network. While many troops overseas may have missed the telecast, some caught the text on the Internet, Provance said.

On Friday, when Provance faced Norwood, the commander handed him a letter stating, &#8220;I am flagging you pending the outcome of Fay&#8217;s investigation into the alleged detainee abuse at Abu Ghraib. The basis of the flag is a violation of an order issued to you by your company commander.&#8221;

He was given a second order not to talk to the press, but since has done follow-up interviews with ABC, The Washington Post and Stars and Stripes.

Speaking over the phone Tuesday from his Wiesbaden office, Norwood defended his reprimand for Provance, saying, &#8220;My actions were in accordance with [Army] regulations.&#8221;

Officials at V Corps, the battalion&#8217;s higher headquarters, won&#8217;t comment on administrative actions against Provance because he has not formally been charged, spokeswoman Hilde Patton said, adding that she also could not comment on any topic related to the Abu Ghraib investigation.

Without a security clearance, Provance is now working in his company&#8217;s nuclear, biological and chemical equipment room.

Provance still speaks passionately about his dedication to the Army and condemns the few leaders above him.

He stands by his decision to speak publicly.

After speaking to the press about his experiences at Abu Ghraib prison, Sgt. Samuel Provance finds himself caught between his conscience and an Army gag order.

After speaking to ABC News about the alleged abuse at Iraq&#8217;s Abu Ghraib prison, Provance was told by his commanders that he was being flagged from favorable actions and his security clearance was being pulled for disobeying orders to keep quiet.

His case has caught the attention of Sen. Lindsey Graham, R-S.C., who is a member of the Senate Armed Services Committee, which is investigating the prison abuse.

Provance said that Graham called him at 2:30 a.m. Friday to talk about his experiences at the prison. Graham also pledged to watch over the soldier&#8217;s career, Provance said.

&#8220;It is important every military member understand that not only is it the right thing to report misconduct, it is required as part of their duty,&#8221; Graham said in an e-mail statement sent to Stars and Stripes. &#8220;In speaking with Sgt. Provance, I sought to assure him that in providing testimony before a court-martial he was doing his legal duty.&#8221;

Because the Army has not lodged a criminal charge against Provance, the legality of his company commander&#8217;s gag order &#8212; followed by his battalion commander&#8217;s subsequent administrative actions &#8212; has yet to be challenged, said Capt. Jon Stanfield, an Army defense attorney in Wiesbaden, Germany, whom Provance identified as his military counsel.

While Provance was counseled, the battalion&#8217;s personnel office would have to submit additional paperwork to officially flag him, and it should provide him a copy, Stanfield said. Provance said he has not been given official, written notification of his flagging or his security clearance removal.

Provance said part of his decision to talk to ABC News was to shed light on his dilemma in the hope that he could get help outside the military. So far, that hope has come from New York City lawyer Scott Horton, who practices international law and focuses on human rights. Horton said he has little confidence in military defense attorneys, so he stepped in to advise Provance and help him secure permanent legal counsel.

Hardy Vieux, a former Navy defense lawyer who now works for the Washington, D.C.-based law firm of Dykema and Gossett, now is on board to assist Provance, Horton said. In an e-mail Wednesday, Vieux said that because he just recently became involved in Provance&#8217;s case, he didn&#8217;t have anything &#8220;meaningful to share.&#8221;

&#8220;The key question here is the integrity of the Army, both in the scandal and also the way the matter is investigated and prosecuted,&#8221; Horton said.

Horton said he is trying to find out if Provance is protected under the federal whistle-blower statutes. There are two federal protection laws, Horton said, including one that specifically pertains to military personnel.

The military whistle-blower protection act prohibits commanders from taking unfavorable actions against troops who speak openly to members of Congress, an inspector general, or other official investigators. What is unclear is whether it protects Provance, who spoke to the media against military orders.

Furthermore, the command gag order may not have been lawful, Horton said. The action raises serious legal issues pertaining not only to Provance&#8217;s 1st Amendment rights, but also for the congressional panel overseeing the Abu Ghraib investigation.

&#8220;There&#8217;s absolutely no question that the Army is making an exceptionally aggressive and heavy- handed effort to intimidate soldiers from making comments to the media and other government agencies,&#8221; Horton said. &#8220;It speaks of a cover-up.&#8221;