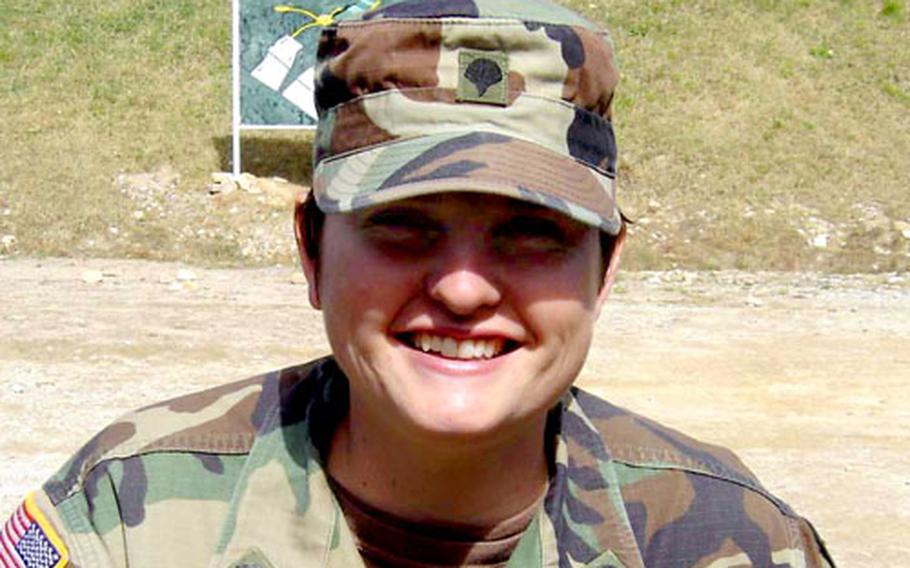 PYONGTAEK, South Korea &#8212; About four or five years ago back in her native Oklahoma, Stephanie Jo Cassidy would get on the back of her Uncle Jake&#8217;s Harley-Davidson motorcycle and he&#8217;d take her through the streets of Ringling and on the highways near town.

But apart from that, and a small dirt bike she owned many years ago, the 27-year-old Army specialist has had little involvement with motorcycles. Normally, her enthusiasm is for softball, fishing, and playing spades.

Well, stand by, Oklahoma: Stephanie Jo&#8217;s next duty station will be Fort Sill, Okla., and before long she&#8217;ll be the one flashing past on a 700-pound 15th Anniversary Edition Harley-Davidson Fat Boy motorcycle with a 1,550 cc engine, chrome wheels, a Badlander-inspired seat and a 24-karat gold-plated emblem.

She won the Fat Boy in a Pacific-wide promotional contest put on by the new car sales people at the Army and Air Force Exchange Service, said Sal Salvucci, senior sales agent at Camp Walker&#8217;s AAFES new car sales outlet. Salvucci says they sell the Fat Boy for $18,862 but that he&#8217;s seen them selling stateside for $25,000 or more.

It was a hot Saturday earlier this month when Cassidy signed up during a stop at the Walker PX.

Then, the next day she worked 24-hour barracks duty until 9 a.m. Monday, and was asleep after her shift when a soldier friend woke her.