GI Bill changes could send some veterans into deep debt 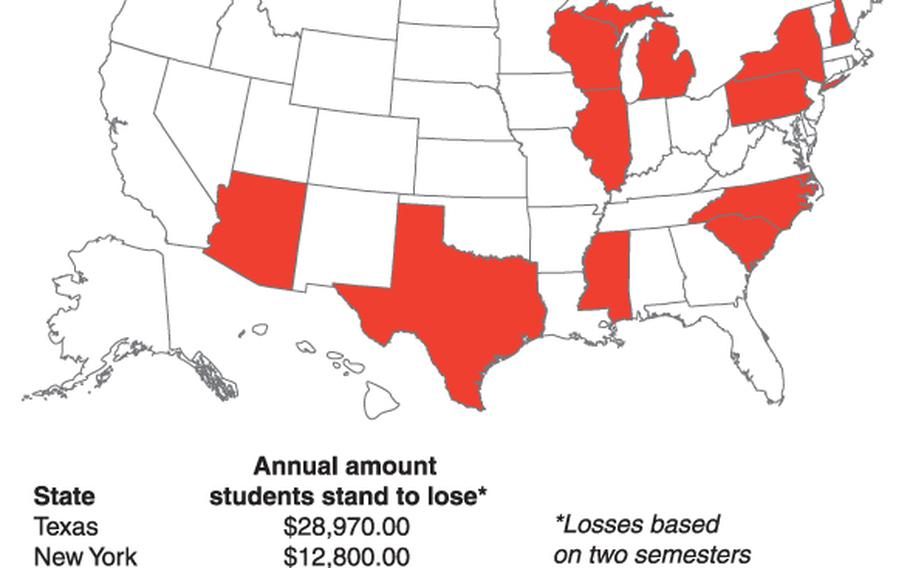 Army veteran Azar Boehm looks over his textbooks for his classes at Columbia University. The 24-year-old junior will see a $10,000 shortfall in his tuition funding for next semester because of changes made to the GI Bill last December. (Courtesy of Azar Boehm)

WASHINGTON &mdash; When Azar Boehm left the Army last year, he still felt a responsibility to serve. So he joined the New York National Guard and began studying political science at Columbia University, thanks to his generous GI Bill benefits.

&ldquo;I never saw that money as a giveaway,&rdquo; said the 24-year-old junior, who received nearly $30,000 in tuition and fees this school year. &ldquo;I saw it as an investment in the future of the country.&rdquo;

With graduation about 15 months away, Boehm admits he should be thinking about how to turn that investment into a career path. But instead he&rsquo;s worried about finding $10,000 to finish his degree, since changes to the post-9/11 GI Bill rushed through Congress late last year will trim thousands off of his benefit.

&ldquo;It&rsquo;s extremely upsetting and sad,&rdquo; said Boehm, who served in Afghanistan in 2009. &ldquo;My whole plan in choosing a school was making sure I didn&rsquo;t have any debts, not having any financial burden on me after graduation. But that&rsquo;s what I&rsquo;m looking at.&rdquo;

In an effort to simplify the tuition formula for veterans headed to college, lawmakers in December approved a measure to pay a flat rate of $17,500 per year for tuition and fees at all colleges except public schools in veterans&rsquo; home states, which are covered in full.

For most student vets, the changes mean a sizable boost in the money they receive. But for a smaller group &mdash; students like Boehm &mdash; the change will mean a painful cut in funding they thought would be available to pay for classes next year.

Veterans groups who had supported the legislation in December are scrambling to find a fix before August, when the new provisions go into effect. Without one, thousands of student veterans could be forced to choose between taking out unanticipated student loans or taking more drastic action.

&ldquo;We&rsquo;ve heard from a lot of people who are considering transferring or dropping out of school altogether rather than take out big loans,&rdquo; said John McClellan, an organizer with Military Veterans of Columbia University. &ldquo;They thought they had the promise of funding in place, but now it&rsquo;s gone.&rdquo;

When lawmakers passed the post-9/11 GI Bill benefits three years ago, the plan was designed to allow the new wave of Iraq and Afghanistan veterans to attend college without incurring tens of thousands of dollars in debt.

Veterans were guaranteed a full four years of tuition, with a maximum benefit equaling the cost of the most expensive public school in a veteran&rsquo;s home state. But the changes also brought significant inequities.

To solve that problem, veterans groups began pushing for a simpler tuition formula: a single flat rate for any school outside the home state public colleges. Tim Embree, legislative associate with the Iraq and Afghanistan Veterans of America, said his group pushed for a $25,000 cap, likely enough to cover all but a few expensive cases.

The result is that students from 11 states will lose money next semester, some more than $10,000 for the fall alone. On the other hand, student veterans in 39 other states and the District of Columbia will get thousands more for college tuition, allowing them to afford some schools they had never considered in the past.

Students attending public universities in their home states will not be affected by the change.

The legislation also included more money for distance learners and online classes, and expanded the number of National Guardsmen eligible for the education benefits. Lawmakers also changed a provision in the living stipend to only pay students rent money for months during their semester, which trimmed an additional $1,000 to $2,000 from their annual benefit.

When the bill passed amid a flurry of last-minute legislation in December, the result left many students midway through their college careers with potentially thousands of dollars in unexpected debt.

&ldquo;It&rsquo;s ridiculous to deter students from going to a good private school, but that&rsquo;s what these changes do,&rdquo; said Derek Blumke, co-founder of Student Veterans of America.

Boehm said he seriously considered going to a cheaper public school instead of Columbia University because he wanted to remain free of debt, but when the money worked out, the Ivy League school was an easy choice.

Now, he&rsquo;ll reluctantly take out loans to complete his degree. He said he doesn&rsquo;t regret the decision, but the change puts him in a darker financial place.

In an angry speech just before the bill&rsquo;s passage, former Rep. Steve Buyer, R-Ind., then the ranking member of the House Veterans Affairs Committee, warned the changes would create more problems than it solved, and that lawmakers hadn&rsquo;t taken time to properly research the measure.

&ldquo;These enhancements are being done at the expense of some veterans to the benefit of other veterans,&rdquo; he said. &ldquo;If you went out and surveyed the average student veteran, I believe they would oppose improving their own benefit at the expense of one of their comrades.&rdquo;

But in the end, he was one of only three lawmakers in the House to vote against the measure, against 409 representatives approving it.

Both SVA and IAVA &mdash; along with a number of other veterans groups &mdash; supported the legislation last year. Blumke and Embree said they still believe the bill helps more veterans than it hurts, but both groups are pushing lawmakers to insert a grandfather clause in the legislation before August.

&ldquo;We need to get action on this,&rdquo; Blumke said.

Capitol Hill staffers acknowledge the problem but question whether lawmakers will have time to address it in coming months.

Budget cuts in the current fiscal year and looming budget fights for fiscal 2012 have dominated conversation in Congress, and any additional cost for the grandfather clause will likely have to be offset with spending cuts somewhere else.

No legislation has been introduced in either chamber to deal with the problem. Even though the changes don&rsquo;t go into effect until August, most students need to finalize their plans for the fall semester in the next two months.

Nicholas Lozano, a former Marine Corps reservist, is a sophomore at Columbia who doesn&rsquo;t know if he&rsquo;ll be able to stay there for another two years, due to the tuition changes.

&ldquo;I&rsquo;m looking at $35,000 in debt at least with the changes,&rdquo; he said. &ldquo;I was expecting to have to take out a few loans near the end to cover expenses, but nothing like this.&rdquo;

Lozano had already been using money saved from his Iraq deployment two years ago to pay for unpaid expenses for school. That money won&rsquo;t last much longer if the new tuition rates go into effect.

&ldquo;I don&rsquo;t see myself leaving school, but I don&rsquo;t know how I&rsquo;m going to afford this,&rdquo; he said.