Ghouls and rockers at Lakenheath 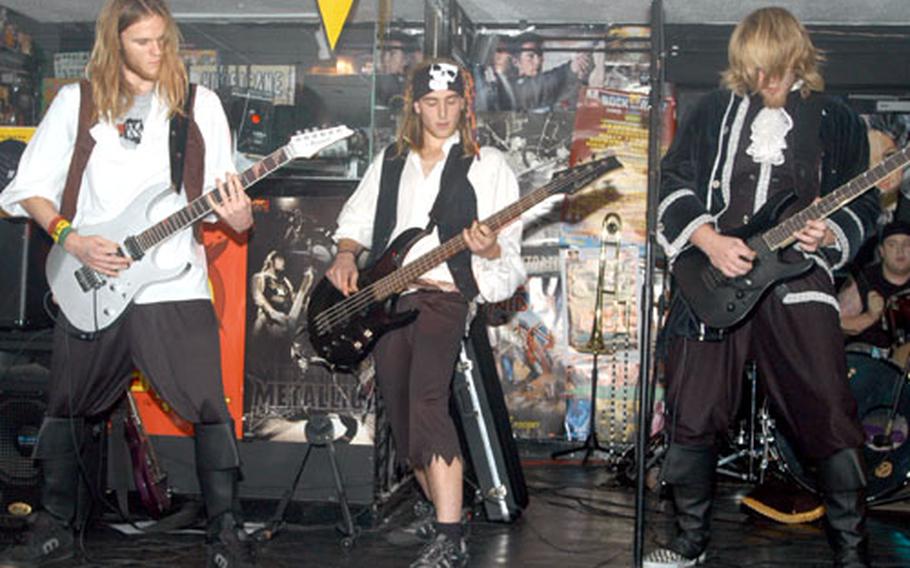 RAF LAKENHEATH &#8212; First came the Grim Reaper and the Catholic school girls. Then there were a blood-soaked Carrie and a genie or two. And for good measure, Axl Rose and Slash of Guns N&#8217; Roses fame stopped by.

They converged Saturday night to convert the 48th Avenue Community Center into a Halloween headbanger&#8217;s ball.

Three British heavy metal bands and Defaced, an airmen band that claimed the RAF Lakenheath Battle of the Bands title a few months ago, rocked the community center for about four hours to a crowd of dozens that came and went throughout the night.

Senior Airman Gina Anderson, 23, of Torrance, Calif., was wearing the Carrie outfit and came to cheer on the Defaced band members she serves with on RAF Mildenhall.

Community center employee Joe Crittenden had to remind folks not to wander into the territory where good times become dangerous times with a pre-show safety briefing on &#8220;safe moshing.&#8221;

He called for the kind of restraint lacking at the Battle of the Bands.

Organized by Defaced member Greg Sartain and 48th Avenue manager Ruben Cerda, the concert provided three English metal bands the opportunity to expose their music to Americans and for the Americans, in turn, to hear a genre normally excluded from BBC Radio 1.

Once Forgotten, a four-piece Cambridge-based band, hit the stage first in pirate outfits. They were followed by Norwich-based Soulborn, clad in a series of random costumes.

Sartain left his 100th Air Refueling Wing tech sergeant alter ego at the door and took on the full part of rock &#8217;n&#8217; roll lion-tamer for the performance with a long, flowing dark wig.