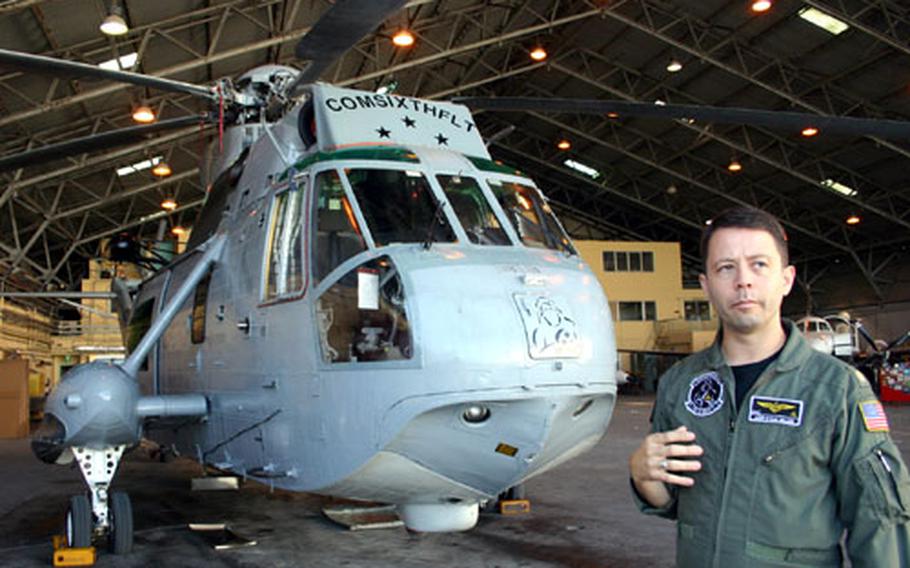 The logo of the Naples, Italy-based HC-2 Detachment 1, the "Ghostriders," painted on one of its Sea King helicopters. (Sandra Jontz / S&S) 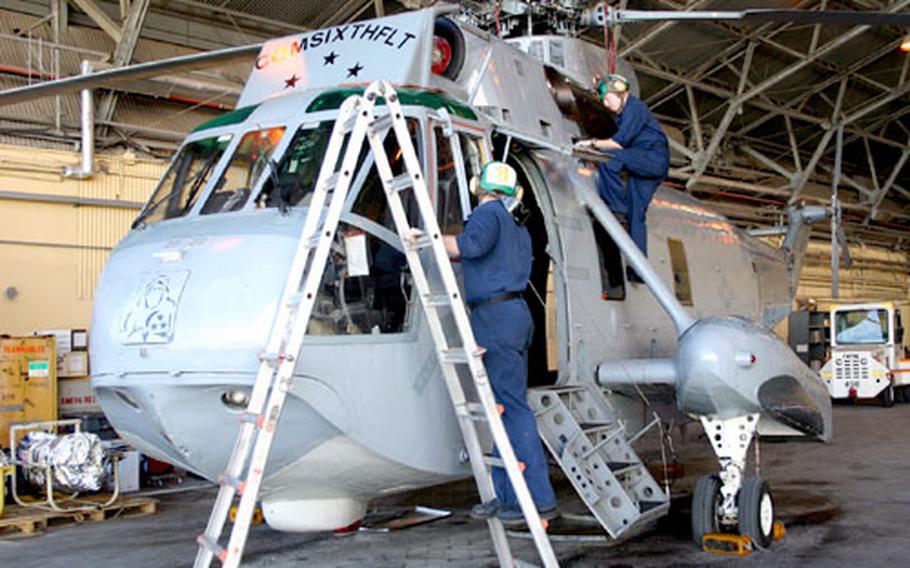 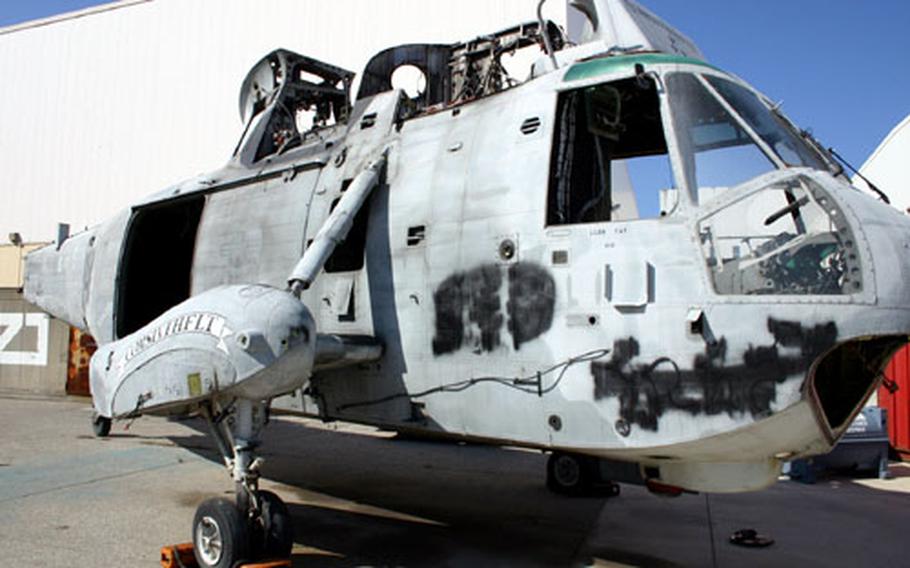 "Ghostrider 741," a Navy UH-3H Sea King helicopter based with Detachment 1 of Helicopter Combat Support Squadron Two, already has been stripped down to its mostly aluminum shell. In the coming weeks, Seabees from Naval Support Activity Naples, Italy, will cut up 741 and local contractors will take it away as scrap metal. (Sandra Jontz / S&S)

NAPLES, Italy &#8212; Saying goodbye to an old friend never is easy, especially when that friend is going to end up as razor blades.

But that&#8217;s what Lt. Cmdr. Steve Miller has prepared for as he and other sailors get ready to bid farewell to the U.S. Navy&#8217;s aging fleet of 33 UH-3H Sea King helicopters.

&#8220;It&#8217;s a sad feeling because the aircraft has been in the fleet for so long,&#8221; said Miller, the officer-in-charge of the 19 sailors of the forward-deployed Detachment 1 of Helicopter Combat Support Squadron Two.

One of the Naples-based workhorse choppers, &#8220;Ghost Rider 741,&#8221; already has been stripped to its mostly aluminum shell, and in the coming weeks, Seabees from Naval Support Activity Naples will cut it up and local contractors will take it away as scrap metal.

The Naples-based detachment, of which the helicopters are permanently based, but the sailors are not, got its name because it rode with 6th Fleet&#8217;s former flagship, the USS La Salle, which used to be painted white and was called the &#8220;great ghost&#8221; as it sailed.

The Norfolk, Va.-based HC-2 has 12 of the aircraft in its inventory; six in Norfolk, two in Naples and four that make up the &#8220;Desert Ducks&#8221; Detachment 2 stationed in Bahrain. Five of the 12 already have been decommissioned.

Like so much of what is in the U.S. military&#8217;s inventory, the helicopters come in a variety of versions. There&#8217;s the VH-3D, used for presidential and executive transport, the SH-3H that is carrier-based for anti-submarine warfare, and UH-3H, used for torpedo recovery, logistics and search and rescue.

Over the coming years, the Navy is replacing its aging fleet of the roughly $6.4 million Sea King twin engine helicopters with MH-60S Knighthawks.

Costs for the new Sikorsky aircraft vary. The Knighthawks is a variant of the Navy&#8217;s Sea Hawk, the Army&#8217;s Black Hawk and Air Force&#8217;s Pave Hawk. The price tags can vary from $5.9 million for the Black Hawk to $10.2 million for the Pave Hawk, according to a Navy fact sheet.

Sailors of the Naples &#8220;Ghost Riders&#8221; have ferried admirals and dignitaries, cargos of mail, meals and spare ship parts for 6th Fleet since 1962.

Ghost Rider 743 has logged more than 14,500 fight hours, from ferrying VIPs to conducting search-and-rescue missions, or in exercises for special warfare and Marine Corps forces in Europe.

Sea Kings not sold for scrap metal will be taken to the Aerospace Maintenance and Regeneration Center &#8212; known as the bone yard &#8212; at Davis-Monthan Air Force Base in Tucson, Ariz.

Last year, Lt. John &#8220;Jack Mack&#8221; Mackowski, the operations officer for Detachment 1, said he reluctantly piloted a Sea King on its final and &#8220;heart-wrenching&#8221; flight from Norfolk to Tucson and into the bone yard.

HC-2 provides executive transport in support of the Atlantic Fleet and operates the Fleet Replacement Squadron for all pilots and aircrew learning to fly the Sea King. In October, the new squadron detachment from Helicopter Combat Support Squadron 28, Detachment 7, will arrive in Naples with the new MH-60S Knighthawks to take over the mission.