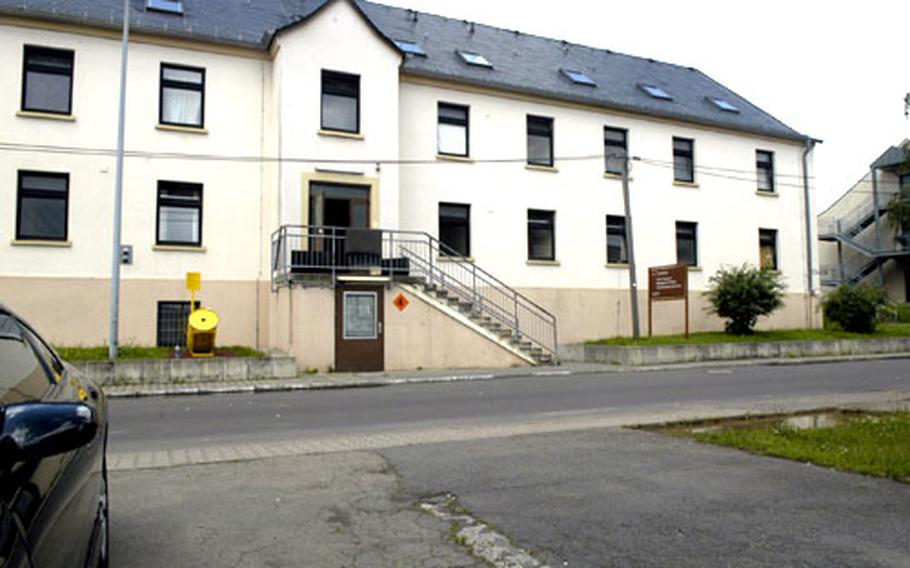 Many soldiers with the 47th Forward Support Battalion&#39;s Company A say barracks conditions at Building 8234 are sub-par. Dirty water and a spotty heating system are among the problems. (John Vandiver / S&S)

Many soldiers with the 47th Forward Support Battalion&#39;s Company A say barracks conditions at Building 8234 are sub-par. Dirty water and a spotty heating system are among the problems. (John Vandiver / S&S) 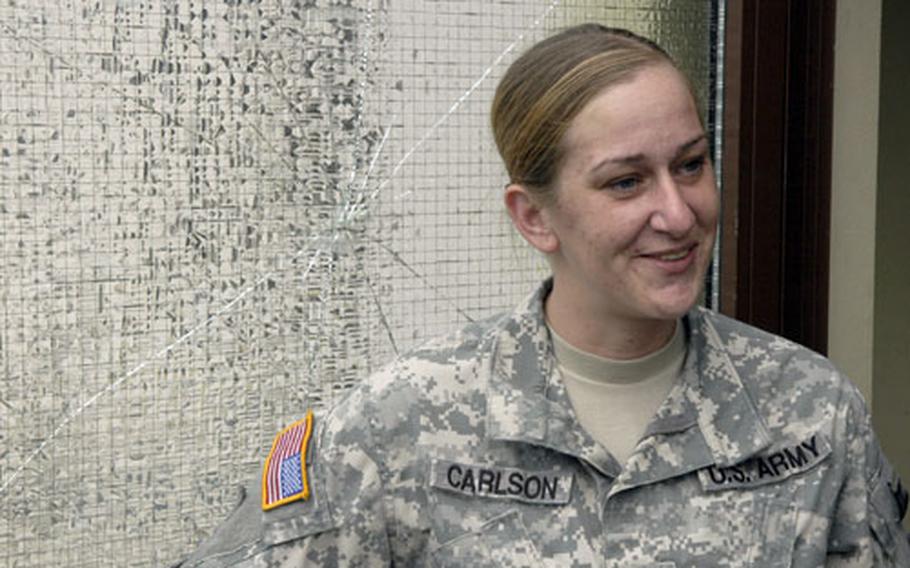 While the front door has been broken for about two years, Spc. Lisa Carlson said door&#39;s window has only been cracked for the past few months. (John Vandiver / S&S)

BAUMHOLDER, Germany &#8212; When Spc. Lisa Carlson returned to her barracks in December after a year in Iraq, she discovered that her bedroom heater was broken, the kitchen she shares with fellow soldiers was locked and the front door to the building remained broken like it was when she arrived in Baumholder in 2005.

Indeed, the building is nicknamed &#8220;the ghetto&#8221; and is generally regarded as the worst living quarters in the U.S. Army Garrison at Baumholder, according to some of the soldiers who live there.

&#8220;Trying to get someone to fix something is like pulling teeth,&#8221; Sgt. Steve Martin said with disgust as he pointed to a sink that spits brownish water and doesn&#8217;t drain because the pipes are clogged.

Soldiers at the barracks say they can&#8217;t understand why their building is in such poor condition and why garrison authorities have permitted the building to collapse into such disrepair.

Typically, soldiers report facility problems to the soldier in charge of quarters that day, who in turn forwards the complaint to the company&#8217;s first sergeant, who in turn is supposed to send it up the chain of command.

&#8220;Something must get lost in the translation,&#8221; Martin said, explaining the situation in eye-rolling disbelief.

The garrison&#8217;s public works director said Tuesday that this is the first he&#8217;s heard of problems at the building. This year, DPW has received about 40 work orders, mainly for things such as missing room keys, DPW director Bob Baumgardt said. No work order for the broken front door or dirty water has been submitted, he said.

Baumgardt said he would send workers to assess the situation.

When Martin arrived in Baumholder from Fort Carson, Colo., a few months ago, he said he was mortified at the condition of his room. He says it took him three days to scrub it clean. The part that really ticks Martin off is there were no cleaning supplies when he arrived &#8212; and there still aren&#8217;t.

Problems such as a broken microwave or lack of cleaning supplies are not a DPW issue but rather something to be handled by individual units, Baumgardt said.

Meanwhile, the broken front door can cause trouble from time to time. Late at night, if someone forgets to keep the door propped, soldiers sometimes are forced to climb through fellow soldiers&#8217; windows to gain access.

Soldiers are still waiting for the key to get access to the game room, which features a pool table but is otherwise empty.

There seems to be a problem with spare keys here, Carlson observed. When soldiers returned from Iraq last fall, the kitchen door was locked. Month after month, flummoxed soldiers waited for a spare. In April, one was finally provided, Carlson said.

An insufficient amount of hot water also is a big sore spot for the soldiers of the building.

About a month ago, the hot water was out for three days, soldiers said. At the time, Carlson visited friends at other barracks for showers. It&#8217;s something she still often does because the hot water supply remains unpredictable, just like the heater in her room, which usually doesn&#8217;t work, Carlson said.

The weather in Baumholder has been cold enough at times this summer to warrant turning on the heat.

Some soldiers say they turn on the showers and let the water run for about 10 minutes so it heats up.

Carlson and Martin say the soldiers at Building 8234 deserve better.