Getting used to the racket, rockets 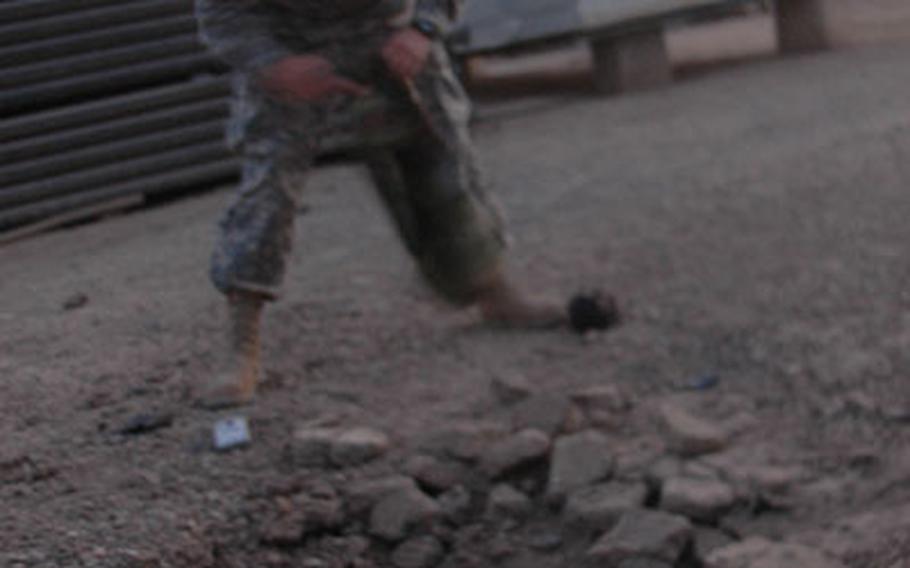 Spc. Horacio Proa, 22, of Delray Beach, Fla., responds to a rocket attack on FOB Loyalty on Wednesday at dawn. He works with units on the base who fire 120 mm mortar shells. "If we can, we usually shoot back," he said. No one was injured in the attack. (Les Neuhaus / S&S)

Spc. Horacio Proa, 22, of Delray Beach, Fla., responds to a rocket attack on FOB Loyalty on Wednesday at dawn. He works with units on the base who fire 120 mm mortar shells. "If we can, we usually shoot back," he said. No one was injured in the attack. (Les Neuhaus / S&S) Rows of pictures of soldiers killed in action since November 2006 line the wall of the headquarters building for the 2nd Infantry Division&#39;s 2nd Brigade at Forward Operating Base Loyalty in eastern Baghdad. More than 60 troops have been killed. (Les Neuhaus / S&S) 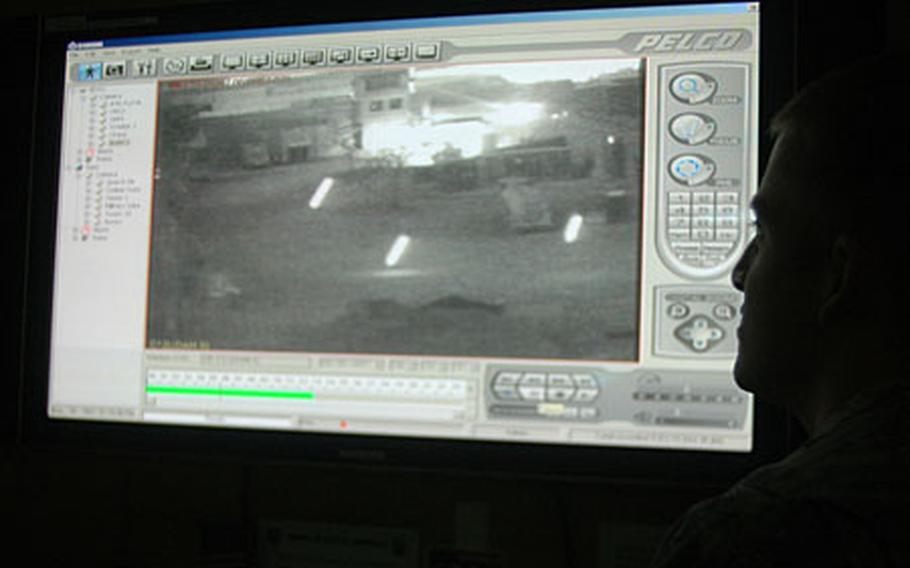 A video on a screen in the base defense operations center at Forward Operating Base Loyalty in eastern Baghdad depicts a series a 107 mm rocket attack on Wednesday morning at dawn. The rocket landed inside the base and caused damage to vehicles and buildings, but no one was injured. (Les Neuhaus / S&S)

U.S. military personnel, along with civilians, awoke to a 107 mm rocket attack that landed inside the base. No one was injured, but people sleeping in quarters 30 feet away were unnerved.

On the other side of the base, some troops in the base&#8217;s Internet and phone cafe jumped up, startled, while others continued to check e-mail unfazed by the ear-bursting explosion. Some were on the phones talking with loved ones back home.

At FOB Loyalty, in eastern Baghdad, mortar and rocket attacks have become routine enough that troops of the 2nd Infantry Division&#8217;s 2nd Brigade mostly go about business as usual.

In the last seven days (Aug. 30-Sept. 5), attacks have occurred every day except one, according to U.S. military officials around the base. So along with roadside bombs left outside of the gates, hazards lurk everywhere.

People consider it to be almost normal, and at current levels, down from what they have been in the past. A soldier was killed in an attack less than a month ago while having lunch on base with other soldiers.

&#8220;At one point about a month and a half ago, we had rocket attacks for 11 straight days,&#8221; said Master Sgt. Robert Hall, 41, the noncommissioned officer in charge of the base&#8217;s defense operations center.

The center is a beehive of activity, with phones ringing off the hook, and screens and maps hanging on the walls, depicting the latest threat-level information.

The blast Wednesday morning left a sizeable hole in the ground, and shrapnel left thick industrial tires flattened on armored vehicles within a 30-foot vicinity of the impact site. But the attack wasn&#8217;t over.

A few minutes later, another rocket landed just outside base walls. And about an hour after that, a roadside bomb detonated about a half-mile from the entrance to the base.

Monday and Tuesday were no different. A mortar round landed inside the base Tuesday morning, again causing damage to base vehicles. On Monday, one landed outside of the base walls.

To reveal more about the attacks could compromise operational security, officials advised. The fact is, though, insurgents aren&#8217;t letting up.

&#8220;It was the most shot-at brigade in the entire army, as far as casualties during (our deployment to) Fallujah,&#8221; said Col. Jeffrey L. Bannister, referring to the brigade&#8217;s first foray into Iraq.

It would seem that things are no different this time around. The Airborne Ranger commands five different divisional elements within his mixed brigade, the largest in Baghdad.

On Sunday, five of his men were struck by an armor-penetrating roadside bomb while driving by the front gate of the base. Four were treated and released, while another was taken to the hospital in the International Zone for further care.

According to Maj. Sean Ryan, the base public affairs officer, attacks actually went down by 84, from a total of 347 in July to 263 in August. Up to 62 &#8220;high-value&#8221; suspects had been arrested so far in connection with attacks on U.S. troops in the area.

The highest rate of attacks recorded thus far for the brigade came in January, with 358. Then there was a dramatic drop to 178 in February, just as surge-related troops began to arrive, with a slow and steady march upward again until August&#8217;s drop.

Sometimes explosions go off inside or outside the base before officials have time to sound the warning.

Troops are hungry to find the perpetrators of the explosions. They want to either kill or capture them.