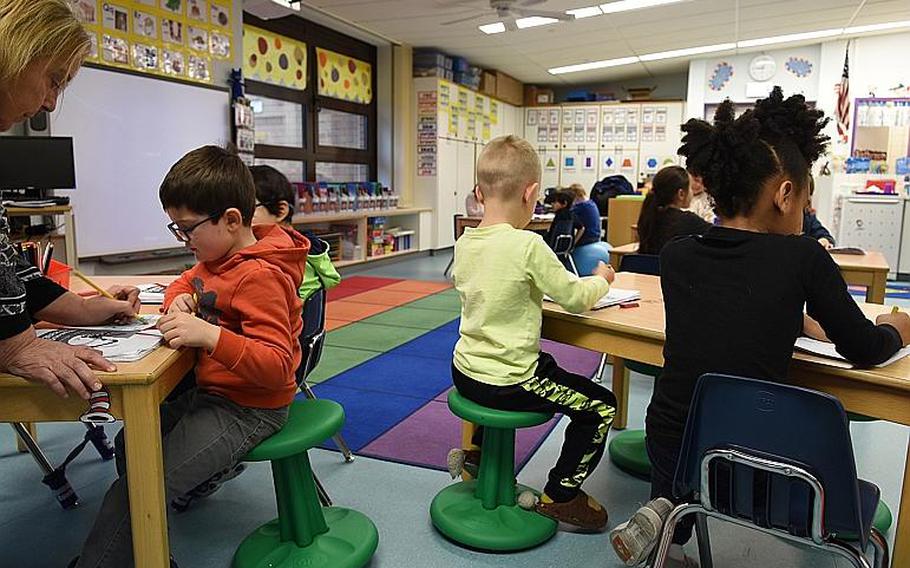 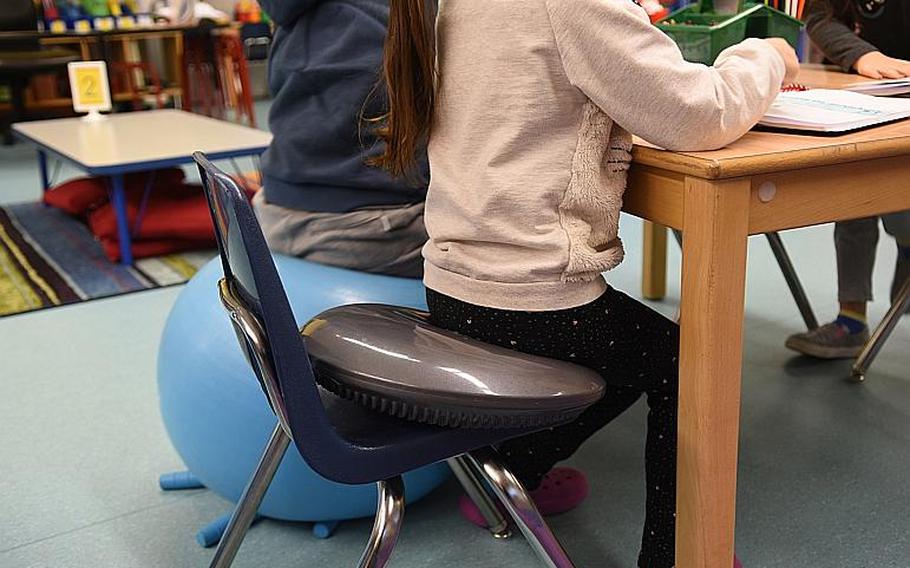 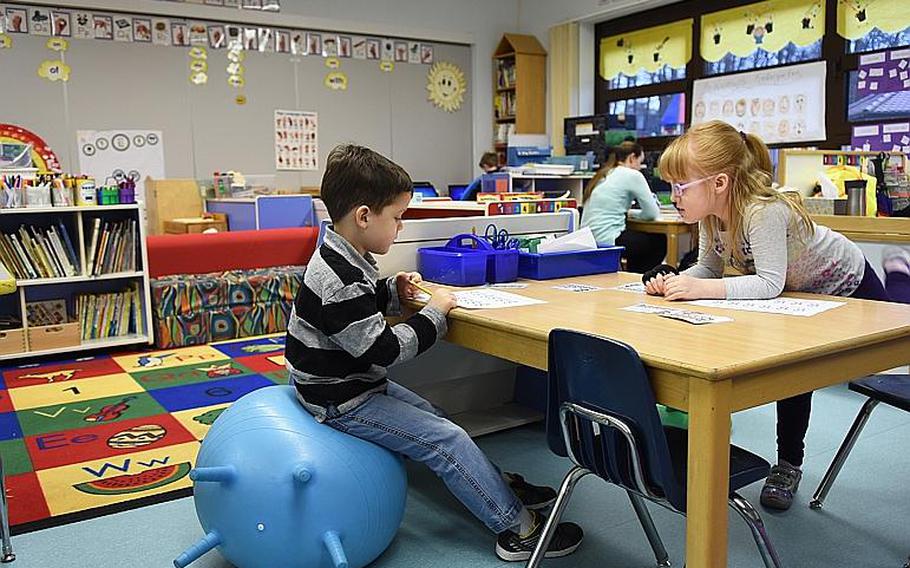 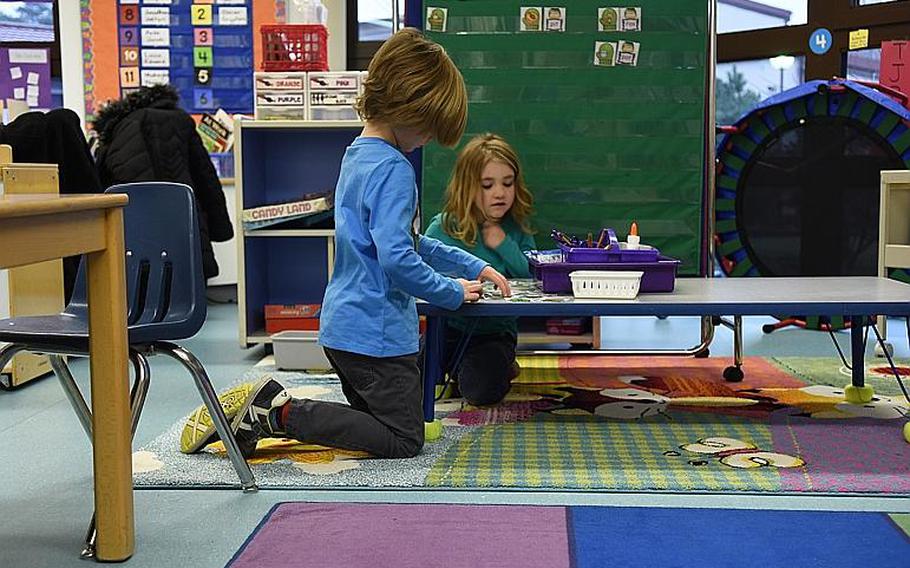 Buy Photo
Kindergartners Jonah Winningham, left, and Aria Terrell have the option of sitting on the floor at a low table while doing work in their classroom at Ramstein Elementary School, Germany. At least a dozen classrooms at the school are using or are planning to use flexible seating. (Jennifer H. Svan/Stars and Stripes) 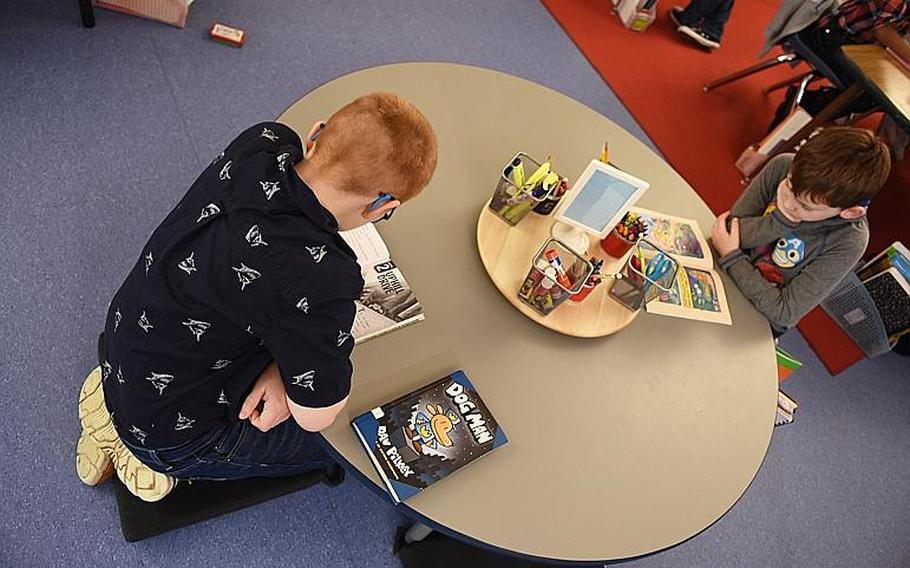 RAMSTEIN AIR BASE, Germany — In Emily Costa’s second-grade classroom, kids are free to wiggle, wobble and rock back and forth in their seats.

For the most part, Costa doesn’t have to worry that fidgeting students will topple over in their chairs.

While a few of her pupils sit in a traditional chair with four legs, some wiggle like they have ants in their pants on a wobble stool; others kneel on pillows at tables low to the floor while others prefer to stand.

The unconventional seating arrangement at Ramstein Elementary School is called flexible seating, part of a growing trend that’s transforming classrooms from a one-seat-fits-all model to an eclectic design more common in coffee shops or living rooms.

The idea is that allowing students to choose seating that suits their learning style, comfort level or even their mood helps them to better concentrate on academics.

“It takes that one thing off their plate of having to figure out how to be comfortable in a chair, when 6-, 7-, 8-year-olds are not necessarily meant to sit all day,” Costa said.

At RES, at least a dozen classrooms in kindergarten, first and second grade – nearly a third of the school - have adopted or are in the process of adding some flexible seating, said principal Emmalie Lee.

The cost varies. Pillows don’t cost much. Standing instead of sitting in the computer lab doesn’t cost anything.

But other choices are pricier. Wobbly stools start at about $70 apiece and go up from there. Yoga balls for the classroom cost about $30 each, RES teachers said.

The Department of Defense Education Activity’s Europe East District this year awarded more than $58,000 in “$mart Money” grants to 29 educators in the district, including two for flexible seating. The program supports innovation aimed at boosting student achievement.

Awards were wide-ranging, from science kits and instruments for a string orchestra to hand-held whiteboards and equipment for a secular yoga program.

Two educators, one at RES and one at Ramstein Intermediate School, received grants for about $2,350 each for flexible seating.

At RES, the grant, awarded to first-grade teacher Sheila Marksberry, will be shared, teachers said.

“We have ordered more wobble chairs, some scoop rockers,” Costa said, as well as yoga balls and floor-level chairs with a lap desk.

Kelli Keedwell, an RES kindergarten teacher, received grant money for flexible seating last year, after reading about it on teacher blogs and websites.

Much of the evidence supporting flexible seating is anecdotal, though the concept is supported by research that shows kids are more engaged in learning when they’re physically active and are involved in creating their environment.

Keedwell said it’s all about the movement.

“Kindergarten is the new first grade, academic-wise,” she said. “It’s not the kindergarten that we used to know, where you’re outside playing all the time. We can at least move and get some wiggles out.”

But not too many wiggles. “They learn if they are being silly or (doing) too much bouncing on the yoga ball, they lose it for the day and then they get to try again the next day,” Keedwell said.