Getting ready for the Taliban 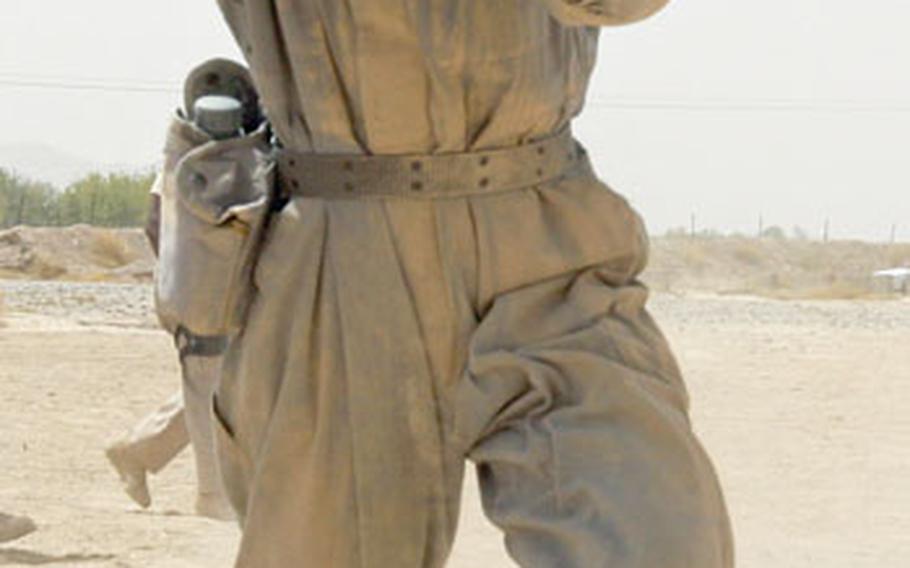 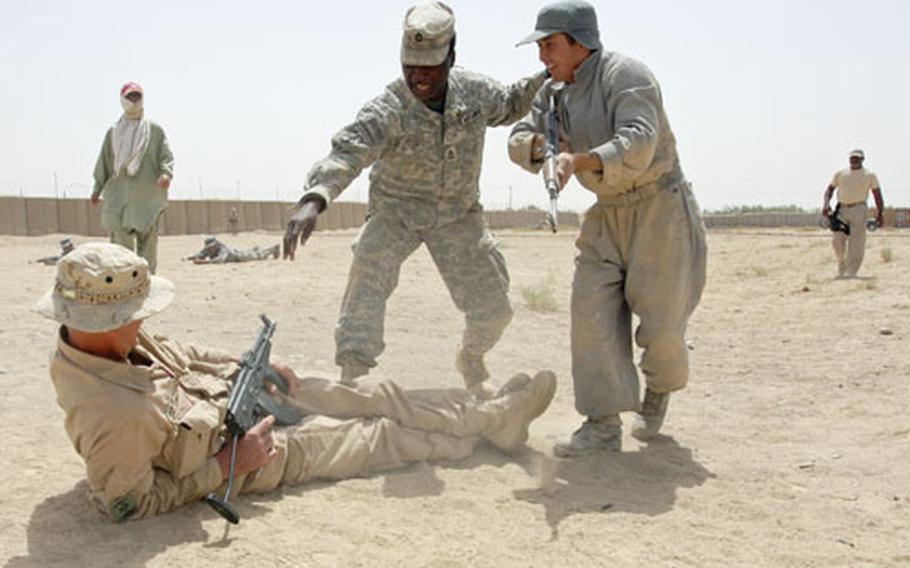 During training last week, Sgt. 1st Class Samuels Baidoos, center, of the New York National Guard, tells an Afghan police trainee that the first thing he should do when coming up on an enemy fighter is to make sure he’s dead, then take his weapon. (Drew Brown/S&S) 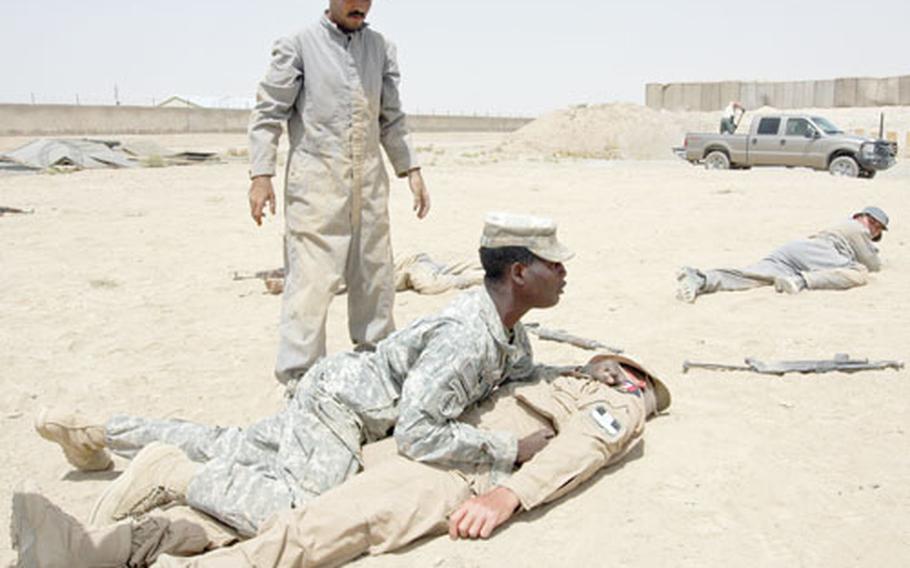 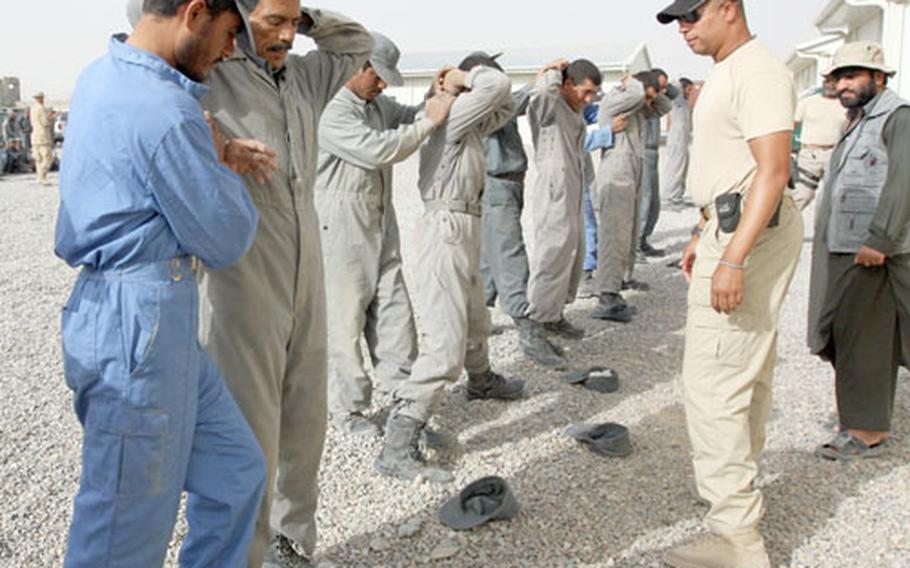 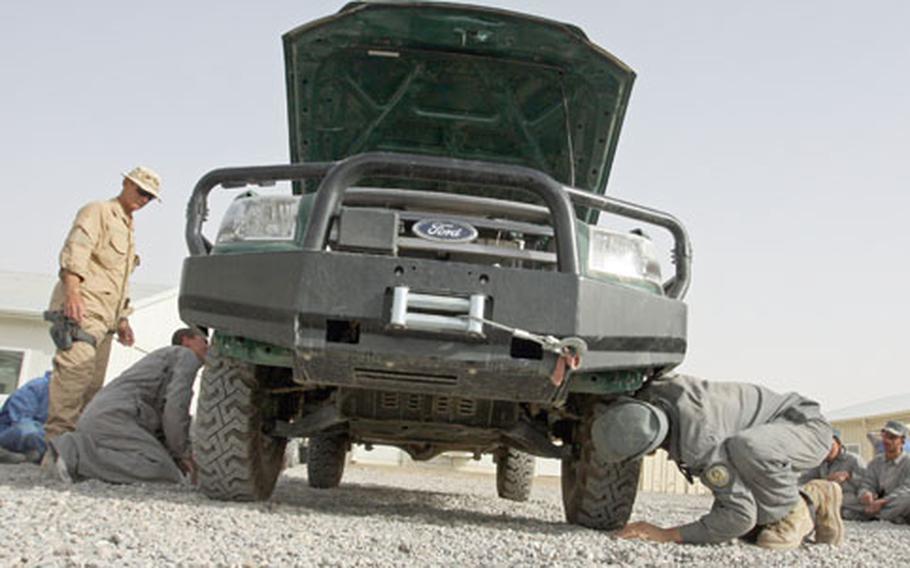 Afghan police trainees practice searching for car bombs as Cameron McFarlane, a trainer from the Royal Canadian Mounted Police, looks on, during a course at the Kandahar Regional Training Center in southern Afghanistan. (Drew Brown/S&S)

A staccato burst of AK-47 fire rings out. Although the rounds are blanks, most of the Afghans drop to the ground, as they&#8217;ve been trained to do. A few of them, however, appear momentarily confused.

The booming voice of Sgt. 1st Class Samuels Baidoos, a soldier with the New York National Guard, brings them to their senses.

The Afghan who&#8217;s supposed to be in charge of the patrol, a young Hazara, looks to Baidoos for guidance.

"Come on, commander, let&#8217;s go, get your men moving!" Baidoos shouts. A translator quickly relays his commands into Pashto, the dominant language of southern Afghanistan.

The commander yells out orders. The squad begins to leapfrog ahead three men at a time. What some of them lack in skill, they make up for in enthusiasm. "Allahu akbar!" three of them shout, as they bound forward a short distance and flop on their bellies. "God is great!"

Baidoos, roving back and forth behind the Afghans, yells at them to stay on line. "Situational awareness!" he shouts. "Pay attention to where you are on the line."

Their advance continues for 200 meters across open ground, the rifle fire ringing out sporadically until the men get close, then it stops. Cameron McFarlane, of the Royal Canadian Mounted Police, who&#8217;s been playing the enemy, slumps backward, pretending he&#8217;s dead.

The Afghan commander runs past McFarlane and flops on the ground. The rest of the Afghans do the same.

"What are you doing?" Baidoos yells at the commander, picking him up by his shoulder, and maneuvering him in front of McFarlane. "You make sure he&#8217;s dead. You take his weapon away!"

Welcome to the Kandahar Regional Training Center, where U.S. soldiers, Canadian police officers, and civilian mentors from DynCorp are training local police to take up the frontline fight against the Taliban and al-Qaida in southern Afghanistan.

It isn&#8217;t your typical police academy. During the eight-week course, attendees are schooled in leadership, patrolling, small unit tactics and other basic paramilitary skills. They learn first aid, how to handle weapons and shoot properly, how to set up vehicle checkpoints, how to search for weapons and bombs.

They also receive instruction in basic criminal procedures, the Afghan constitution, human rights, values and ethics. But the paramilitary training predominates, because if the war in Afghanistan is to be won, according to their U.S. and Canadian trainers, it&#8217;s the Afghan police that are going to win it.

"This is a counterinsurgency," said Maj. Roy Hunter, executive officer for the Regional Police Advisory Command-South. "And the strength of a counterinsurgency is the police force. We want to give these guys the skills they need to stay alive."

Efforts to train and equip the Afghan security forces have been uneven. The U.S. military has spent more than $13 billion on the Afghan army over the past six years, and Defense Secretary Robert Gates recently endorsed a plan to increase spending by another $17 billion over five years.

The plan would add another 50,000 troops to the Afghan army, which currently stands at about 65,000 troops.

But efforts to bring the Afghan police up to speed have lagged far behind. Earlier attempts by German forces and DynCorp were considered too slow and ineffective.

The U.S. military took over Afghan police training last January, and has spent about $2.5 billion on the program. Soldiers drawn mostly from the New York National Guard&#8217;s 27th Brigade have trained about 1,300 police in southern Afghanistan in the past nine months. Senior officers say they will have trained more than 3,000 by year&#8217;s end.

Similar training centers have been set up near other cities in Afghanistan, including Herat in the west, Kunduz in the north, Jalalabad in the east and the capital of Kabul.

The model that the U.S. military has employed for the program is called Focused District Development. The entire police force from a district, from the top commander to the lowest recruit, is brought into the center, and they all go through the training together. The Kandahar center can handle up to 350 attendees at any given time. After the police officers graduate, they leave the center fully equipped, with all of the trucks, radios, weapons and ammunition they&#8217;ll need to do their job.

Military trainers also accompany the police back to their home districts. Small units of U.S. soldiers, called Police Mentor Teams, or PMTs, work with the newly trained police in the districts and provide them with continuing advice and support.

U.S. officers say that Focused District Development has had a dramatic impact in rooting out corruption and instilling a new sense of professionalism in police units that have attended the course. The program has also helped reduce casualties. According to Hunter, insurgents killed an average of 200 police a month throughout Afghanistan before the training program started. Casualty rates have since dropped by about two-thirds, he said.

Despite renewed emphasis, the effort to train and equip the Afghan police still suffers from chronic shortages. According to Col. Thomas J. McGrath, who recently finished up a 15-month tour overseeing the Afghan Regional Security Integration Command-South, there are only about 2,800 police trainers working in southern Afghanistan, but the region needs at least twice that number. Only about 25 percent of the districts in southern Afghanistan have police mentor teams assigned to them, McGrath said, in a recent interview.