Getting Personal: With a medal and a 200-pound check, carrom creation scores for RAF Alconbury 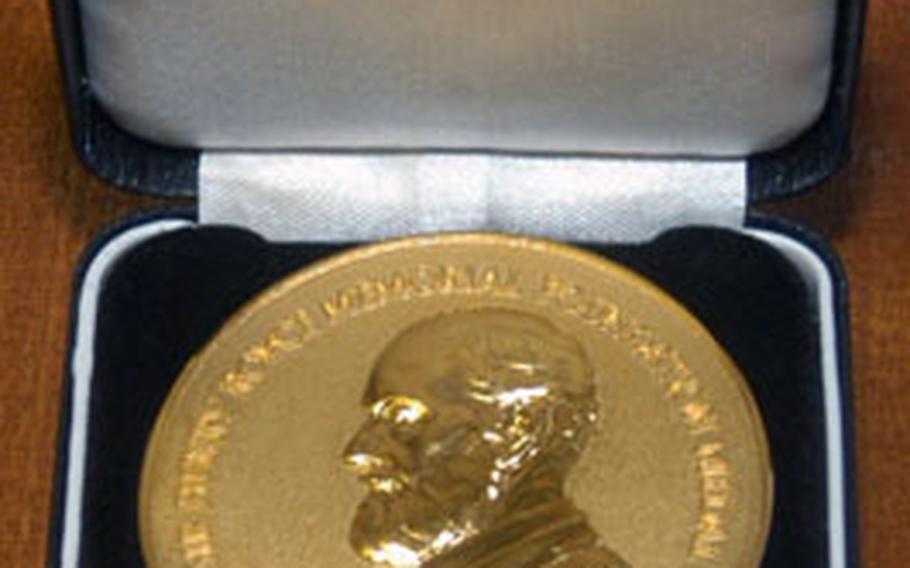 The Sir Henry Royce Memorial Foundation medal and a 200-pound check were presented to Gutteridge for his development of the carrom table. (Sean Kimmons / S&S)

The Sir Henry Royce Memorial Foundation medal and a 200-pound check were presented to Gutteridge for his development of the carrom table. (Sean Kimmons / S&S) Gutteride developed this table to play carrom, which has rules similar to pool. (Sean Kimmons / S&S) 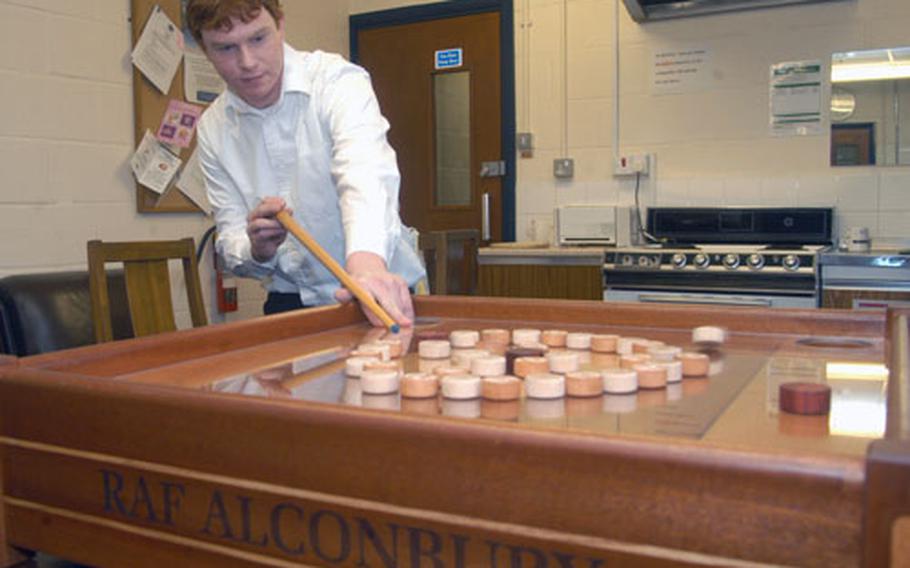 Michael Gutteridge, an apprentice at RAF Alconbury, recently was presented the Sir Henry Royce Memorial Foundation medal and a 200-pound check for his development of an apparatus on which to play carrom. (Sean Kimmons / S&S)

When not knocking out jobs as a carpenter/joiner apprentice at RAF Alconbury, Michael Gutteridge used his free time to construct an award-winning game.

The 21-year-old Brit recently won a national contest for his game of carrom, a 3-foot-by-3-foot wooden creation that took almost four months to complete, he said.

Gutteridge, of Huntingdon, was presented the Sir Henry Royce Memorial Foundation medal and a 200-pound check by the Duchess of Gloucester at the Ministry of Defense Apprentice Awards Ceremony in London last month.

He is one of five apprentices currently in Alconbury&#8217;s program, which enlists local skilled labor, such as carpenters, plumbers, electricians and mechanical fitters, to work on the base.

The rules of carrom are similar to pool. A carrom table has four pockets instead of six, and each side gets 17 pucks that need to be hit into opposing pockets. To win, one must sink all 17 pucks with a cue stick, plus one last puck that serves the same job as the eight ball in pool.

The origins of carrom are a little unclear, but some believe it was invented by the maharajahs of India, while others think the British brought the game to India. Serious carrom tournaments may have begun in 1935, according to www.carrom.org.

Why did you want to make this type of game?

I wanted to find something practical that can be used on base. My dad had one, and I used to play it as a little kid.

Is this more of a pub game or a family game?

It can be both, really.

How long did it take to make the game?

Did you stay after hours to work on it?

They [my supervisors] allowed me to work on it during work time, but if another job came up I&#8217;d leave the game and do the job.

How long do games usually take?

Do you plan on making any other games in the future?

How do you feel about working on an American base?

How did you feel about receiving this award?

Have you spent the 200 pounds yet?