Getting Personal: Wife's dedication, charity work lead to an award 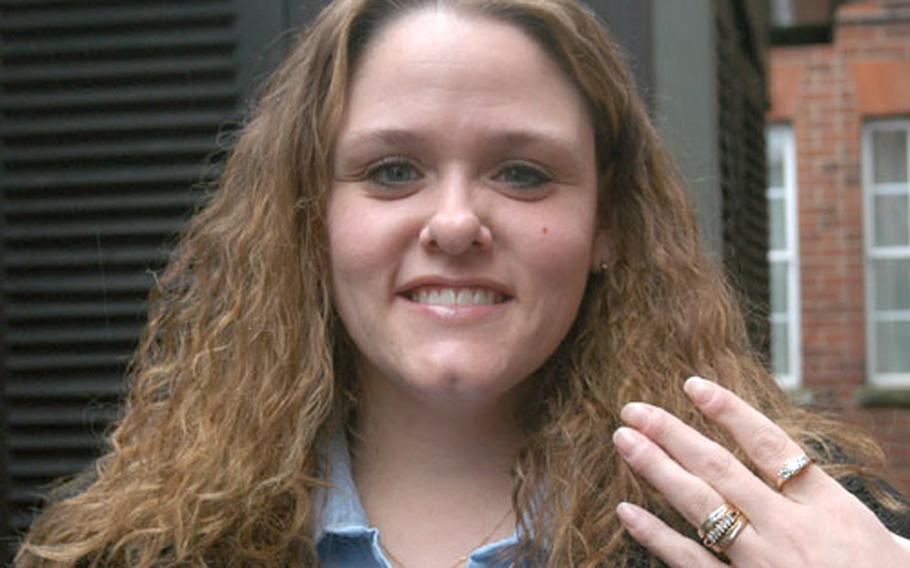 Jessica McCollum, winner of the 2006 Joan Orr Air Force Spouse of the Year award for the 48th Fighter Wing at RAF Lakenheath, flashes some of the gold given to her by her spouse, Staff Sgt. Brian McCollum, of the 48th Aircraft Maintenance Squadron. (Ben Murray / S&S)

When you&#8217;re the mother of four kids ages 1 week to 5 years and your husband deploys to the Middle East, you start to enter the sort of sanctified realm where deities like Princess Diana hover, radiating patience and poise. Add to that the full roster of volunteer positions Jessica McCollum held when her husband, Brian, a staff sergeant with the 48th Aircraft Maintenance Squadron, deployed, and you can see why she recently was given the 48th Fighter Wing&#8217;s Jane Orr Air Force Spouse of the Year Award.

Tell me about yourself. Are you married?

Yes. That would be the Spouse of the Year award.

So, Spouse of the Year, what does that mean, no washing dishes or cleaning up now?

I mean at home, though, with Brian, does this carry some extra clout?

No, he just got back from a deployment so he&#8217;s kind of taking over some of the responsibilities anyway.

No daily back rubs, foot massages, things like that?

At the ceremony, do you have to give an acceptance speech or anything?

Tell us about how you and your husband met.

We met online, through those AOL friends ads or whatever.

Do you remember his ad?

No, I remember his picture though. &#8230; [His ad] just said he had recently moved to the state and was looking for friends.

Yes, he went in the cycle in December. We had my daughter, and he left three days after she was born, and then he just got back three weeks ago.

But it sounds like you are involved in some groups around the base?

[Laughs] No, not really.

Nah, it&#8217;s kind of like a high for me whenever I volunteer, and it just makes me really happy, especially with all our guys deployed in our squadron, and to be able to help the spouses. &#8230; It was just really nice. I sent probably 5,000 cookies and 150 loads of banana bread downrange. Oh! That&#8217;s another thing, I&#8217;m part of this thing called Treat the Troops.

What was your reaction when you heard you&#8217;d gotten the honor?

Was there an awkward moment where you had to smile and hug all the other spouses and pretend not to be too excited?