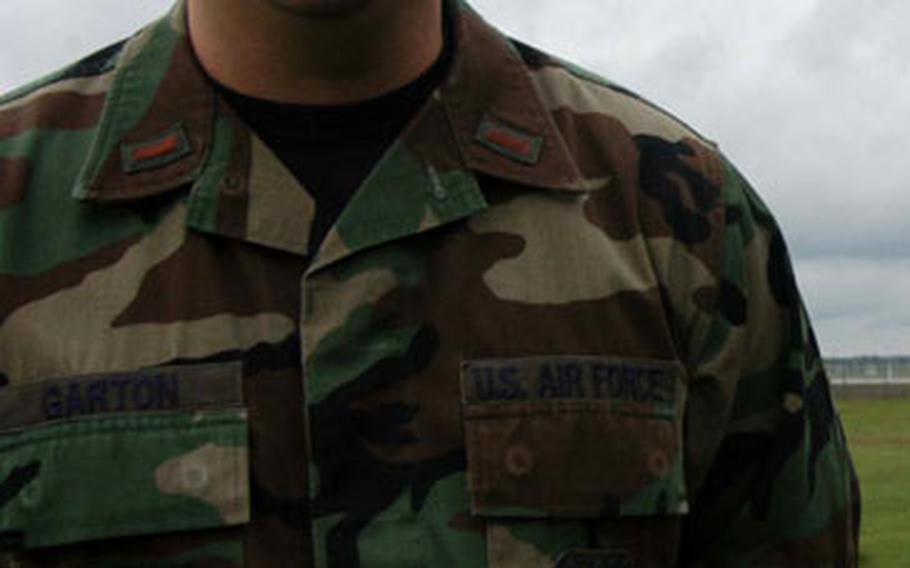 Second Lt. Bryan Garton, wing weather officer for the 48th Fighter Wing at RAF Lakenheath stands under a bank of storm clouds at the base recently. (Ben Murray / S&S)

It&#8217;s easy to hate the weather man. Half the time he&#8217;s the one who has to tell you it&#8217;s going to rain at your wedding, and the only time you really notice him is when he predicts sunshine and hailstones start to fall. But 48th Fighter Wing weather officer 2nd Lt. Bryan Garton is a pretty nice guy. Originally from Albuquerque, N.M., it&#8217;s the job of the RAF Lakenheath meteorologist (his bachelor&#8217;s degree is in business, oddly) is to help manage forecasts for planes in the air and base operations on the ground, a tricky thing to do when the weather blows in off the Atlantic, he said. Rain or shine, he&#8217;s in the business of foretelling the future.

When, exactly, is it going to snow?

Well, it&#8217;s pouring out there right now, but I suppose you knew that two days ago.

Do you have a favorite type of weather?

Is England more of a mix than people like to believe, or is it as crappy as it&#8217;s rumored to be, weather- wise?

Crappy? Well in the winter, yeah, it&#8217;s pretty bad, however, summertime it&#8217;s pretty good. There&#8217;s a lot more sun than anybody realizes. Last summer was actually one of the warmest ones on record.

I live in Cambridge in a pretty small apartment. Am I at risk of tornado damage?

Tornado damage is very unlikely. However, this year there have been some pretty strong winds and even some reports of tornadoes around the London area. But no, it&#8217;s very unlikely. Tornadoes, they can happen in England, but not very likely.

Which do you prefer: the old, fat, jolly Al Roker, or the new, sort of weirdly thin one?

And what is an isobar?

It&#8217;s a line of pressure, basically, typically on a surface chart.

(Look of confusion) Got it.