Getting personal: Tribute to a father’s service 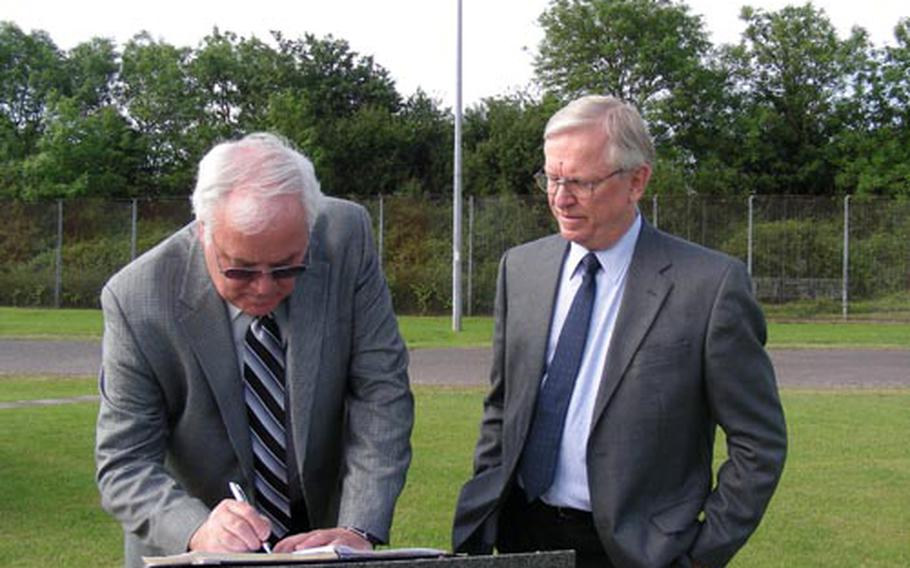 The Aluminum Overcast, a B-17 G Flying Fortress that was manufactured in 1945 for World War II, sits on a runway in Canton, Ohio, Thursday, Sept. 28, 2000. The plane will be at the Military Aircraft Museum for tours near the Akron Canton Regional Airport. (AP photo)

Those who serve their country inevitably pass on from this world, but their legacies live on.

Gary Moncur&#8217;s father, 1st Lt. Vern Moncur, flew the B-17G Flying Fortress "Thunderbird" in and out of occupied Europe during World War II. Lt. Moncur passed away in the 1980s, and ever since then, his son Gary has honored his father&#8217;s memory and service, even becoming a director of the 303rd Bomber Group memorial organization.

In June, the younger Moncur visited RAF Molesworth to see where his dad&#8217;s missions began during that war. The base has changed a lot. No aircraft go through there anymore. But it was a trip Moncur said he had to make for himself and his father.

So why did you make this trip?I wanted more than anything else to get back and see the base where my father was stationed. He was only there for five months but it made an unbelievable difference in his life. I&#8217;ve been involved with the 303 BG for 11 years. And we thought if we didn&#8217;t do it now, we&#8217;d never do it.

What got you interested in your father&#8217;s military history?About four months before he died [in 1985], I climbed onto a B-17 with him and my son, who was 11 at the time. Dad looked at those controls and almost started to cry. He said, "I&#8217;m sure I could take it off, but I&#8217;d have a hell of a time getting it back down." You could see how much it meant to him. It was never talked about in our home. My mother lost a baby while he was flying combat. Anytime he talked about anything with the war, she would just shut him up.

This was a big undertaking on your part. Why do you think people carry on these legacies?World War II was a war that will never be fought again. It was the last of the hand-to-hand combat, without the smart bombs, that kind of combat. It was a completely different experience from today&#8217;s combat. Now, there&#8217;s not much interest in World War I. I suspect it might be that way when we get down another generation with World War II. When you can have these close ties, that your dad was there and he flew one of those things, there&#8217;s something magical about it.

Was RAF Molesworth what you expected it to be?No. I&#8217;ve seen pictures of it from way back then. There were only two buildings standing on base today that were originals. But it was almost a life-changing experience to walk where he walked. I addressed a group in the hangar where surely he once stood. The camaraderie with these veterans is amazing. It&#8217;s a brotherhood and a family.