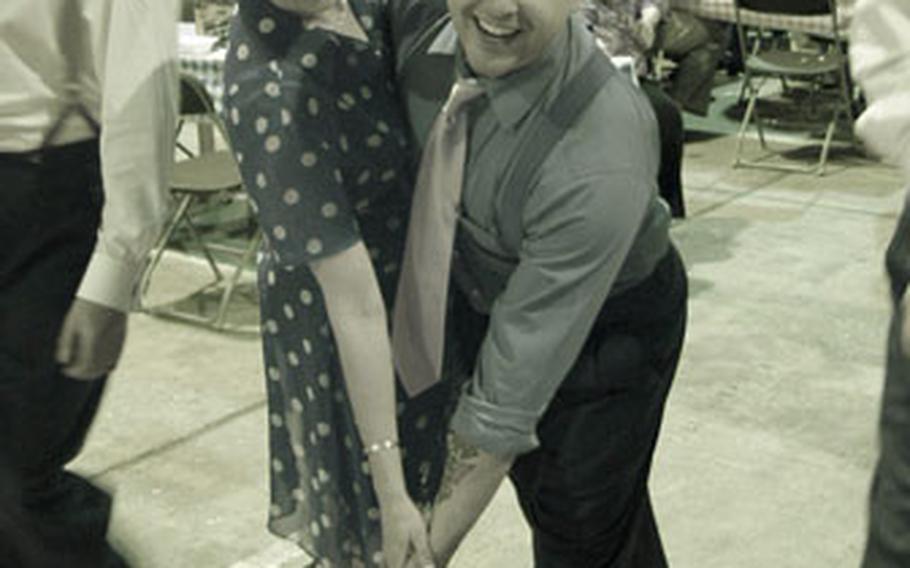 Everyone can dance &#8212; kind of. Be it a two-step, the running man, the cabbage patch, the mashed potato or the funky chicken, everyone can usually bust out at least some kind of move when the spirit hits them.

Then there&#8217;s the folks who can really dance, such as Trenity Mendoza. The New Mexico native &#8212; whose husband is former Air Force and who now works as a contractor at RAF Alconbury &#8212; is a master of swing dancing, that old-timey World War II style that enjoyed a brief resurgence in the 1990s.

Alconbury&#8217;s Hangar Dance is next month, and Mendoza is showing potential attendees just how to jump and jive, mastering moves such as &#8220;the cigarette roll&#8221; and &#8220;sweep the floor.&#8221; Attendees are invited to be as ambitious as they want during the three Saturday sessions, which began May 12. It&#8217;s up to you. Just swing, Daddy-o!

Swing dancing, huh? That&#8217;s a skill set most would usually associate with Grandma Gladys or some other elderly family member. How&#8217;d you get into this and teaching lessons? When I lived in south Florida, I did professional swing dancing. I danced in a Super Bowl halftime show for Big Bad Voodoo Daddy and Stevie Wonder. Then I started teaching private lessons, 2000-ish. When we came to Alconbury, it came up that I used to teach and dance. So I was like, &#8220;sure.&#8221; I taught everyone last year.

How did you get started? I ended up just being exposed to it by a couple that was doing it. I was just a natural at it; it came very easy to me. The next thing I know I was doing it on a nightly basis. Then I was doing promotional events and getting paid.

When on the dance floor, I&#8217;ve been compared to a bear having a seizure, all fur and spastic movement. How does someone in my situation get over that when hitting the floor? The secret of dance is if you think you know what you&#8217;re doing, so does everybody else. You and your partner do your thing to the beat. You just stay on the beat, and you&#8217;re all right.

Will you be teaching all that crazy jazz? I can teach the hard, tricky stuff. Most of the people who come are close to retirement age, so I keep it basic.

Remember in the &#8217;90s, when swing music and dancing made a comeback, and people were dressed old-timey and stuff? What was that about? When I started swing dancing, it was all those hep cats. You dressed in the gear and you became the character you developed. The guys had the zoot suits.

Do you think the old stuff from the &#8217;40s is better? I&#8217;m probably more a fan of the Glenn Miller era, and that swing. Swing takes you back to a time when things weren&#8217;t very good. It gave you a chance to breathe and have fun. And in these times, people need something to do that&#8217;s fun, easy and takes your mind off everything else.