Getting Personal: Through checks, airman makes sure the air supply is good 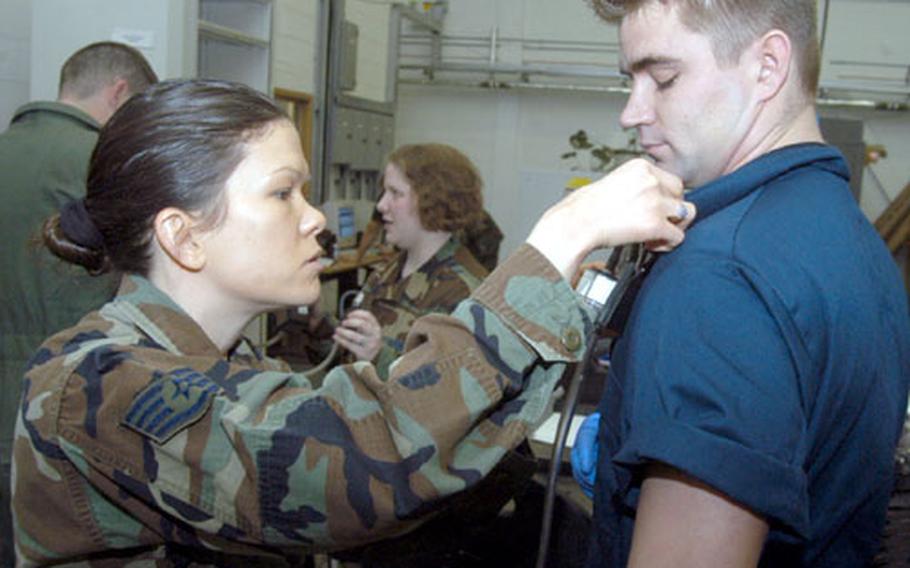 Staff Sgt. Christine Hawkins, a bioengineer for the Bioengineering Flight at RAF Lakenheath, attaches an air pump to Staff Sgt. Mike Evans, a hydraulics craftsman with the 100th Maintenance Squadron. Hawkins was testing for exposure to heavy metals in the air. (Sean Kimmons / S&S)

Staff Sgt. Christine Hawkins, a bioengineer for the Bioengineering Flight at RAF Lakenheath, attaches an air pump to Staff Sgt. Mike Evans, a hydraulics craftsman with the 100th Maintenance Squadron. Hawkins was testing for exposure to heavy metals in the air. (Sean Kimmons / S&S) You may have heard of a dream catcher, but what about an air catcher? As part of her daily duties, Staff Sgt. Christine Hawkins, a bioenvironmental engineering technician for the Bioenvironmental Engineering Flight at RAF Lakenheath, does just that. By using air pumps attached to airmen who work in hazardous environments, she captures air samples to ensure safe work conditions. The Fort Walton, Fla., native also is active after hours. She&#8217;s vice president of the base&#8217;s Airmen Against Drunk Driving program.

What does an Air Force bioengineer do?

Occupational Safety and Health is a big part of our job. We also respond to emergencies on base.

We have two sections in our office: the environmental section and industrial hygiene section. Our bread and butter is basically to come out to the shops and find out what they do, what problems they have, what chemicals they use. We make sure they&#8217;re wearing the proper personal protective equipment.

Why get air samples?

What we&#8217;re trying to do is prevent people from getting sick. So, by doing air samples, it gives us snapshots of the chemical exposures airmen get during their job. If they are overexposed, then there are things that we can do to protect them, like respirators or other controls.

What do you do for the Airmen Against Drunk Driving program?

I mostly do briefings and scheduling. If airmen get stuck somewhere and they can&#8217;t get home, they can call us. It&#8217;s an option instead of drinking and driving.

Have you had an intoxicated person call you?

I had a few. Before I became an officer, I did dispatching.

Do airmen tend to abuse the program?

Some may use it more than they should, but it&#8217;s nonretribution. We would rather them call us than drink and drive.