Getting Personal: The ‘Welcome’ lady 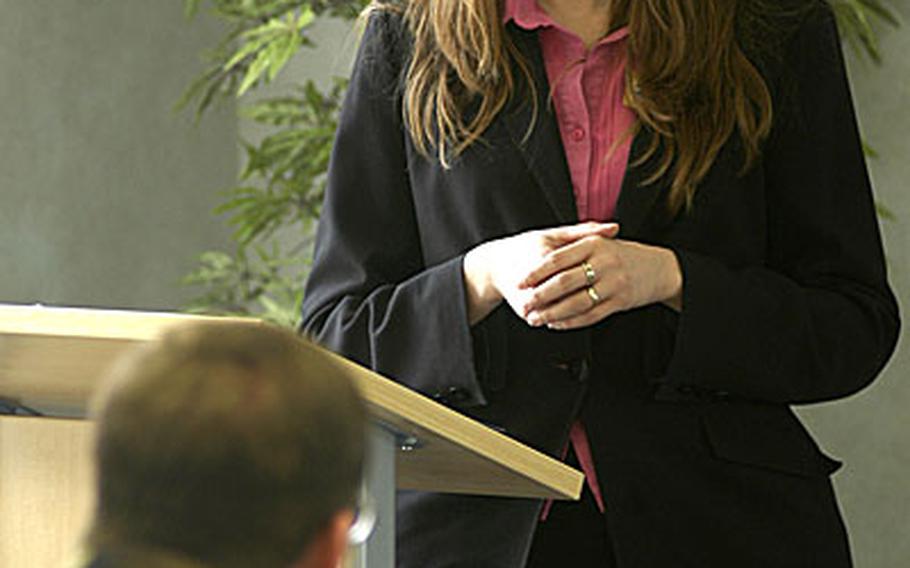 Even with the same language being spoken, a move to England can be tricky. Actually, can it even really be called the same language? The accents can get way thick in these parts. But that aside, there&#8217;s all sorts of cultural conundrums to overcome, and with most Air Force bases being situated in the middle of nowhere, getting one&#8217;s bearings becomes a quick priority.

Luckily there are kindly Brits such as Melissa Hardinge, a local who guides new Americans onto the isle via a &#8220;Welcome to Britain&#8221; class at RAF Mildenhall.

Unlike security and all the other boring briefings for new airman and their families, the Britain primer isn&#8217;t mandatory. But you&#8217;ll be glad you sat through it. There&#8217;s even food.

We get an average of 20 people a week. Between June and September is the peak PCS time.

What are the specifics of the British class?

We tend to let people try out English food and drink. It&#8217;s something they might not have had. We have hot tea and cold fruit squash. Not the vegetable, the drink. We&#8217;ll have English scones, Scottish shortbread, just to give them that extra focus. It&#8217;s also a fun session for what to do in the U.K. We also have various speakers come out. I let them know about the things they can do locally.

Do you get a lot of nervous or apprehensive Americans?

Absolutely. I&#8217;ve been in this role for a year, and I&#8217;ve noticed we seem to be getting more first-time airmen. They make up half of our newcomers. They&#8217;re looking for people to help them get settled, and we try to give them that support.

Generally, people are obviously concerned about finding a house, getting a car and getting to know the local area. The younger crowds are interested in just finding out what there is to do.

Do some Americans come over here with misconceptions about the experience?

Some don&#8217;t quite realize our location, and the fact that we might be more rural than they expect. That drive from Gatwick or Heathrow to Mildenhall gives them that. Some people have grown up in cities and are used to having things close by, restaurants and 24-hour shopping. But it&#8217;s not like that.