Getting personal The story of a survivor 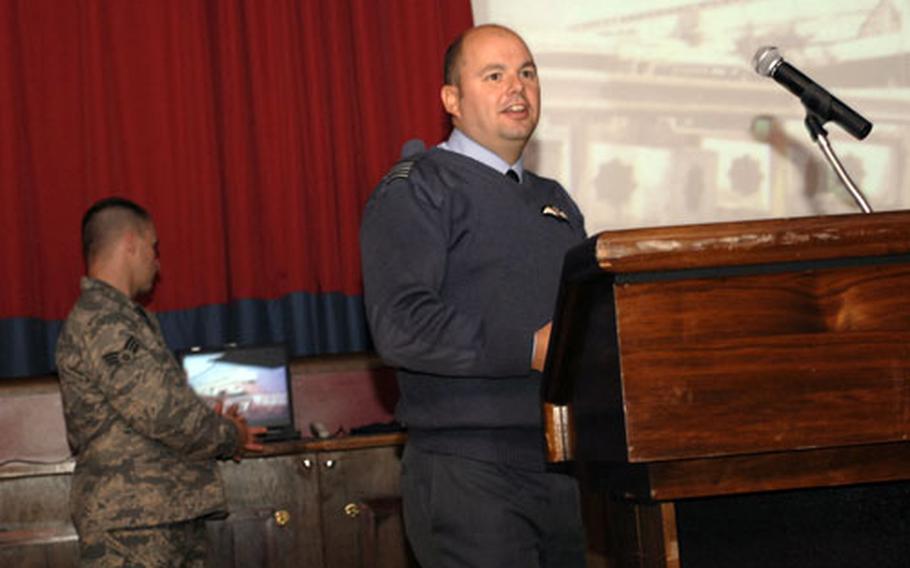 Royal Air Force Wing Cmdr. Dave Waddington, of the IX (B) Squadron at RAF Marham, discusses his experiences as a prisoner of war in Iraq during Operation Desert Storm in 1991. Waddington told a packed house at a POW/MIA Remembrance Week luncheon at RAF Mildenhall that the ordeal reinforced the importance of family and friends. (Photo by Mark Abramson/S&S)

Royal Air Force Wing Cmdr. Dave Waddington, of the IX (B) Squadron at RAF Marham, was shot down in a Tornado strike fighter and captured by the Iraqis during the 1991 Gulf War. He was held for six weeks, beaten several times, held in solitary confinement at times and was housed in a prison that was bombed by allied jets. He was freed in March 1991, on his 25th birthday.

Waddington spoke about the experience during a POW/MIA Remembrance Week luncheon last Wednesday at RAF Mildenhall, and also took time to answer questions from a Stars and Stripes reporter.

How were you shot down?

I was shot down just approaching Tallil air force base, which is in the south of Iraq, and we were essentially conducting a mission to deny the Iraqi air force the ability to fly from Tallil, so we were attacking the runways.

I was essentially the first to arrive with my leader in the position of the target area at which point we were fired upon with a short-range missile system that guided onto the airplane, and although we tried to evade it by using our defensive measures and by throwing the airplane into a tight turn ... the missile still exploded very close to the aircraft. The shrapnel sort of broke through the canopy, so it essentially shattered the canopy and also went underneath the airplane breaking into the hydraulic lines and causing a fire and an electrical failure.

I was exposed to the 540-knot wind rush, which essentially very quickly knocked me unconscious.

What goes through your mind when you are shot down?

I just recall sort of thinking this is it and to be honest, I wasn&#8217;t particularly scared or worried or whatever. I probably didn&#8217;t have time to reach those emotions. You are in so much shock because of the physical ordeal you have been through, but also of course there&#8217;s the mental shock of it.

How were you treated when you were first captured and while you were being held?

I was fortunate that I was captured by the Iraqi air force, and on initial capture ... I was beaten a little bit, but not severely and they searched me. They took away all of my equipment I had with me. During the interrogation with the Baath party we were all beaten pretty severely. Our policy at the time was what we termed the "big four," meaning name, rank, number and date of birth; that was all we could say. It was eventually to the point when I decided I had to start feeding them some information to try to minimize the beatings.

What was it like when you were told you were being freed?

It was interesting &#8212; they came in and the very words were: "Mr. David, the war is over. We can be friends now." Of course, we remained a little bit skeptical that that was indeed the case. The cease fire had happened and therefore there hadn&#8217;t been any air raids for some time. Really, I didn&#8217;t fully believe it until we were handed over to the Red Cross in the middle of Baghdad.

How did the experience affect you and your family?

Obviously, it had a very profound effect during the time. My family, until pretty much my release, didn&#8217;t know if I was dead or alive. And obviously [there was] an awful lot of stress. It sort of teaches you that you can pretty much survive anything and pretty much reinforces the importance of family and friends. And having lived through this experience together, you know it is sort of a bonding experience.

What made you want to speak about your experience during POW/MIA Remembrance Week?

... There is no real equivalent commemoration that we hold within the U.K. or the British military. It was sort of a theme and a cause that I really believed in and felt quite privileged to be asked. This one really sort of appealed to me because it is a very, very worthwhile cause.