Getting Personal: Sometimes a fantasy (writer) 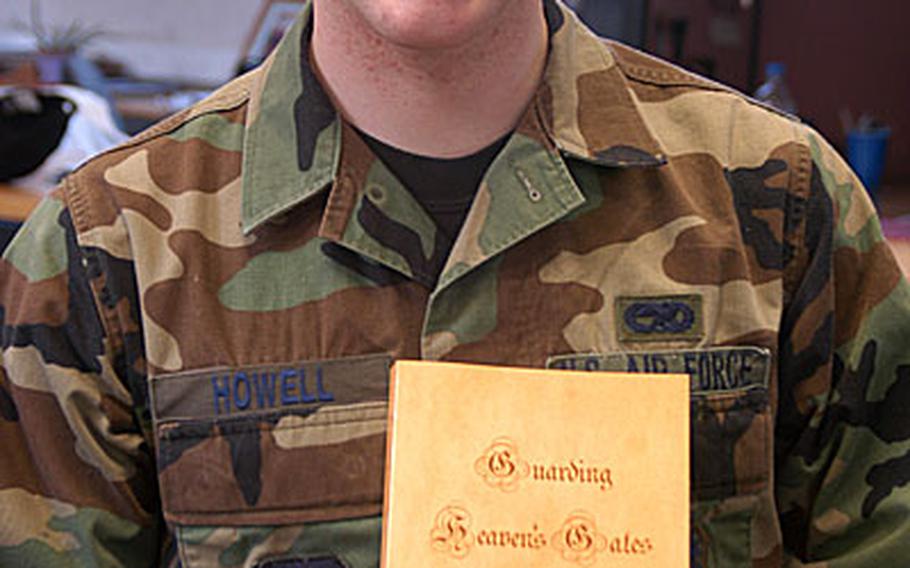 An evil king. An enchanted land. An enslaved hero&#8217;s rise to glory and a menacing race of baddies known as the Savages.

These are some of the elements in a recently published first novel by Airman 1st Class Joshua D. Howell from the 48th Component Maintenance Squadron at RAF Lakenheath. Titled &#8220;Guarding Heaven&#8217;s Gates&#8221; and released in January, the nearly 300-page novel mixes fantasy, adventure, action and romance in a story inspired by the 20-year-old author&#8217;s long-term relationship with a woman named Kyria, whose name has been given to the story&#8217;s heroine.

Told in both first and third person, the book has sold about 60 copies since Howell self-published it this year through the agency AuthorHouse. He&#8217;s now working on a second book on different story line and set of characters.

It starts with the father of the hero standing up after the good king has died and the heir to the throne&#8217;s son basically wants to turn the rest of the village into a slave camp so the father is banished and the son is brought up as a slave. When he grows up, he escapes the slave camp and treks across the mountains and finds this fantasy land on the other side. Basically the evil king finds out and wants to ruin that land as well.

Have you got a favorite part in there? Anything that was particularly hard to write?

Well, the book&#8217;s fiction but it was based off of a relationship I had with a four-year girlfriend, so even though it&#8217;s fiction there&#8217;s a lot of parts in there based on experiences we shared.

There would be, yup.

Is she an evil queen at the end of this?

No, it would be that type of tale.

Is it all humans? Have we got other races going on in there?

Since it is a fantasy novel there are humans but also there&#8217;s the Savages, who are basically diseased human forms, and as well there are some elf characters and some other characters.

Is it the first in a series?

How do people get it?

Well right now it&#8217;s available on the Internet &#8230; Barnes & Noble, Amazon. It&#8217;s also available in bookstores, it just depends on whether the bookstore wants to put it on their shelf.

Do you see yourself as a writer, or a fuel systems repair apprentice?

I&#8217;ve always been a writer, ever since I was young I loved writing. I actually came into the Air Force to do another job, but I ended up being a fuels mechanic, and I&#8217;m enjoying the learning process.

Are you a tortured writer? Someone who labors over every word, or does it just flow for you?

It flows from me pretty well. The original one I wrote wasn&#8217;t 300 pages, but unfortunately due to computer problems, I lost the entire manuscript. I had about 90 percent of the original printed, so I had to rewrite it and upon that process I lengthened it and matured it a bit.

Any advice you&#8217;d give to other young writers?

I learned different things. It&#8217;s good to schedule out the book, write the basic plot before you start writing it, but then at the same time when you do that, you start rushing and forget the details and then it becomes shorter than you thought it would be. So, a lot of patience is basically the main thing I had to learn. You usually [start] to hate the book after so long, so you&#8217;ve got to treat it well and be patient.