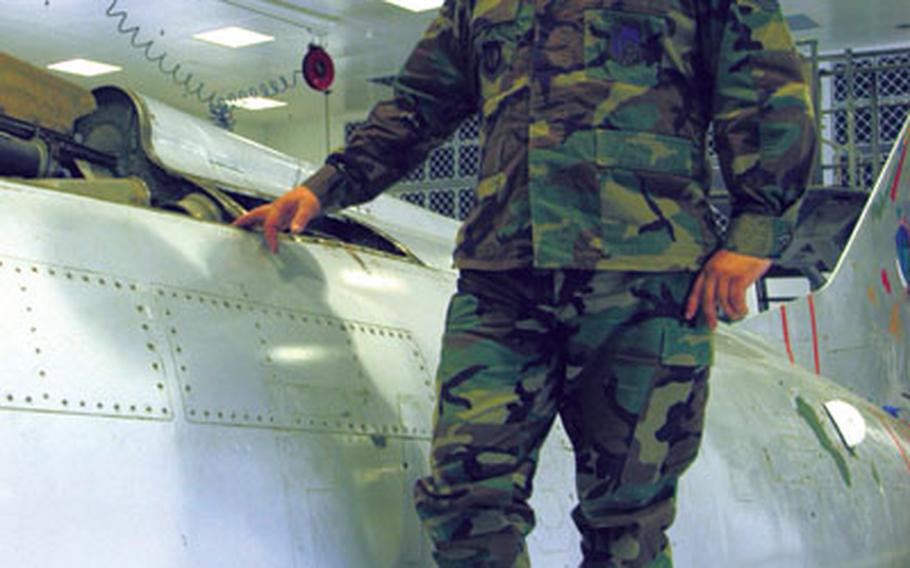 Stars and Stripes caught up with the 38-year-old New Hampshire native during a recent break in the work on the 1954 jet.

So what are you doing now? We&#8217;re currently breaking it down, so we can get inside and see if there are any trouble spots.

Then what? After the damage inspection, we&#8217;ll fix anything that we might find wrong structurally or otherwise.

How long will that entire process take? About three to four weeks.

And then it&#8217;s back to Gate 1? Almost, we have to sand it down and paint it up fresh first before it goes back out front.

What are you normally doing here at RAF Lakenheath when you&#8217;re not restoring 53-year-old fighter jets? Typical aircraft maintenance. F-15 repairs and all that stuff. But this is a good break, not a lot of people get to take part in a restoration in their career.

Was this your first job like this? Actually I got to do a C-130 restoration when I was at Little Rock [Air Force Base in Arkansas]. It went out front of the base, too. But that wasn&#8217;t anything like this. We basically just painted the C-130. This is much more comprehensive.