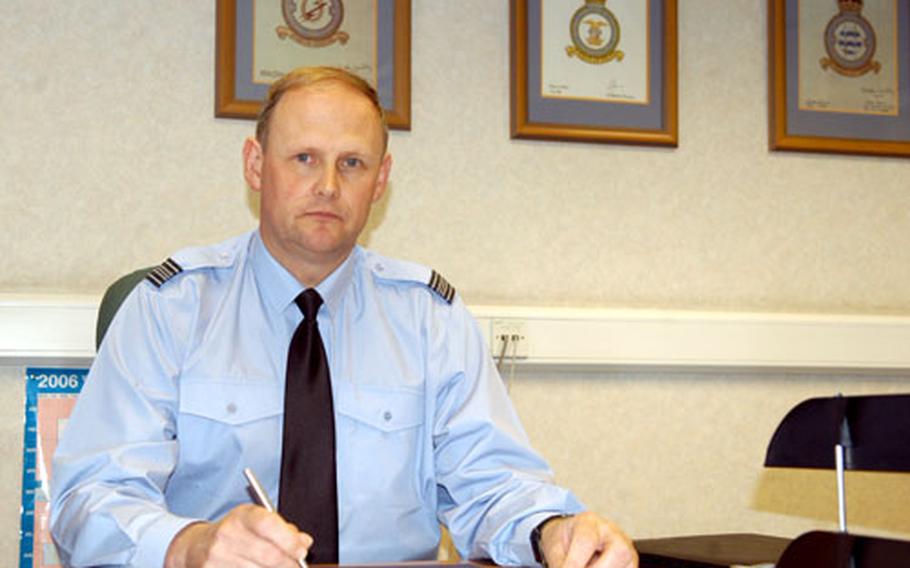 Squadron Leader Jerry Neild took over the reins of the only British servicemember position at RAF Lakenheath last week.

Neild, who has served 32 years in the Royal Air Force, plans to wear many hats in his new position at one of the largest air bases in the U.K.

Whether it&#8217;s serving as a liaison officer to the 48th Fighter Wing command, working as the head of establishment of about 600 Ministry of Defense civilians, or working as an estate manager or a security-risk manager, Neild will have his hands full in his next two years at the base.

Two years may not be enough for Neild, who said that the squadron leader position is something that he&#8217;s looked forward to for a while.

Where were you before arriving at RAF Lakenheath?

I&#8217;m coming from the [Ministry of Defense] in London. I was working within the service personnel policy, [mainly] on housing issues.

Is there a reason that the squadron leader job interests you?

I have worked with a lot of other NATO forces and found that I&#8217;ve enjoyed it.

What&#8217;s the best thing about working with other NATO forces?

Recognition of knowing that your way isn&#8217;t the only way.

I joined originally to become a navigator, but I didn&#8217;t make the grade, so I converted over to administration and secretarial, which in our forces is quite a broad church with a lot of variety.

What are some of the highlights of your 32-year career?

I was one of the first squadron intelligence officers out in Germany in the late 1970s and early 1980s when the Cold War was at its height. Also, being deployed and getting ready for Desert Shield and Desert Storm as part of the RAF headquarters in Saudi Arabia. I&#8217;ve been back there a number of times. I&#8217;d say that those are probably my highlights, but I&#8217;ve found that there&#8217;s something you can take from every tour.

Are there any other British military servicemembers stationed at this base besides you?

No. I am the most senior and the most junior.

Does it feel a little strange to be at a base full of foreign troops?

It presents its own sort of challenge. You may feel a little bit more exposed, if you will. Is it strange? Not. It&#8217;s something that comes with the territory, and I do accept it. At the same time, if my uniform is incorrect, I don&#8217;t have a command master sergeant to argue with me. [Laughing]

Why is it important for the Air Force command here to have a liaison to the host nation?

To my understanding, if you have that local connection and communication, then things run easier.