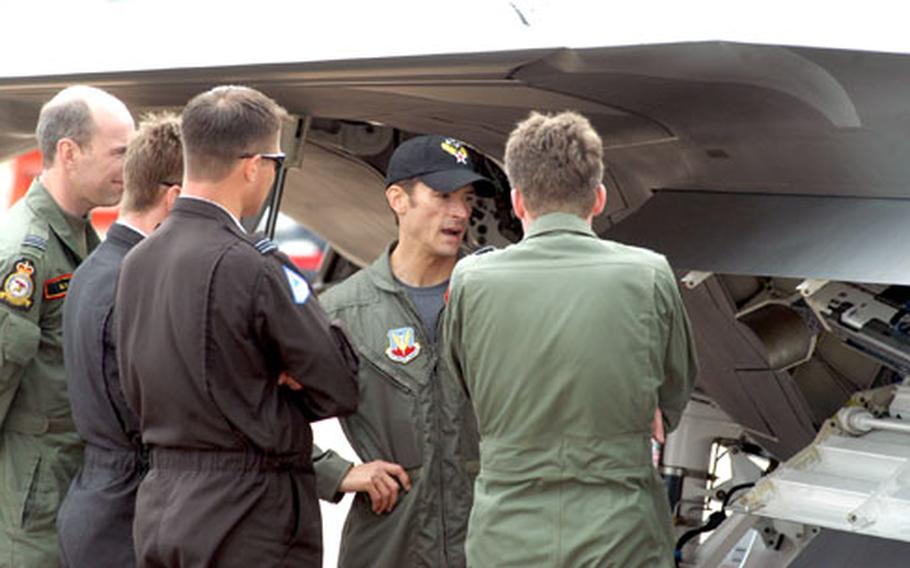 F-22 Raptor pilot Maj. Paul D. Moga (in the black hat) talks to other pilots about the Air Force’s newest fighter. The F-22 and other aircraft were grounded at this year’s Royal International Air Tattoo due to inclement weather. (Sean Kimmons / S&S)

F-22 Raptor pilot Maj. Paul D. Moga (in the black hat) talks to other pilots about the Air Force’s newest fighter. The F-22 and other aircraft were grounded at this year’s Royal International Air Tattoo due to inclement weather. (Sean Kimmons / S&S) 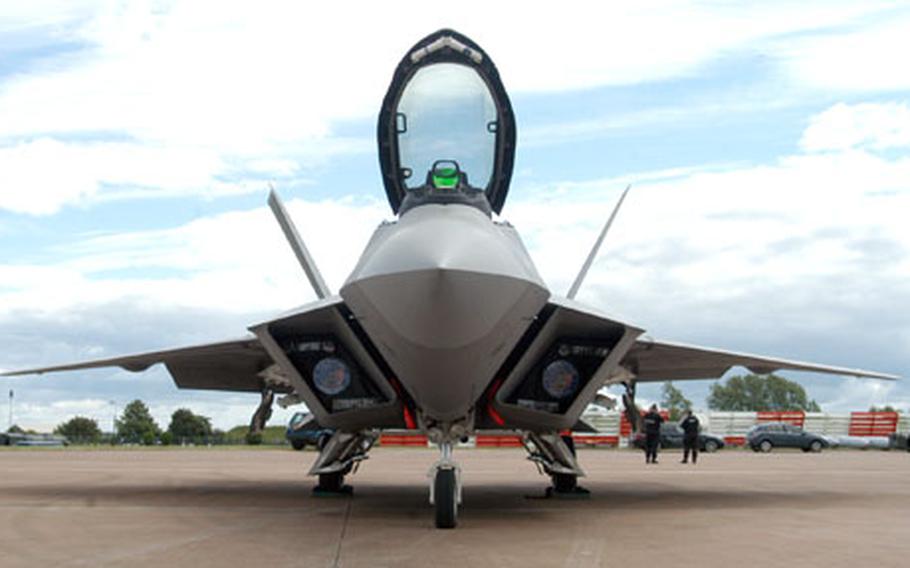 Inclement weather grounded this year&#8217;s Royal International Air Tattoo at RAF Fairford and with it, the world&#8217;s most advanced fighter jet, the F-22 Raptor.

Though F-22 pilot Maj. Paul D. Moga couldn&#8217;t show off the Air Force&#8217;s newest fighter to any crowds at the canceled air show, he still spoke to Stars and Stripes about the new aircraft that will eventually replace an aging F-15 fleet.

Moga, 35, is assigned to the 1st Operations Group out of Langley Air Force Base, Va. In February 2006, he became the first pilot on the F-22 demonstration team. He has also flown F-15 jets for seven years.

Obviously, when we do an air show, people think the best thing is the fact that I can do back flips, loops and tight turns and stuff. The best thing about this jet is it can fight in scenarios where we had no capability to do so without getting whaled on. I can take off on a Raptor by myself and fight an engagement where previously in my F-15 I would have needed myself and my three best buddies. It completely dominates every battlefield we have ever tested it against.

In an F-15 you&#8217;d have to work your tail off to gather information about the battle. In the Raptor, it does all that for you. It will take that information, process it and display it to you on the screen. All you have to do as a pilot is look at the info and figure out what to do with it.

What does it feel like to fly the jet? Is it a smooth ride?

How much does one of these jets cost?

Is it pretty intimidating to fly something that expensive?