Getting Personal: Officer grabbed the reins of CFC campaign and took it past its goal 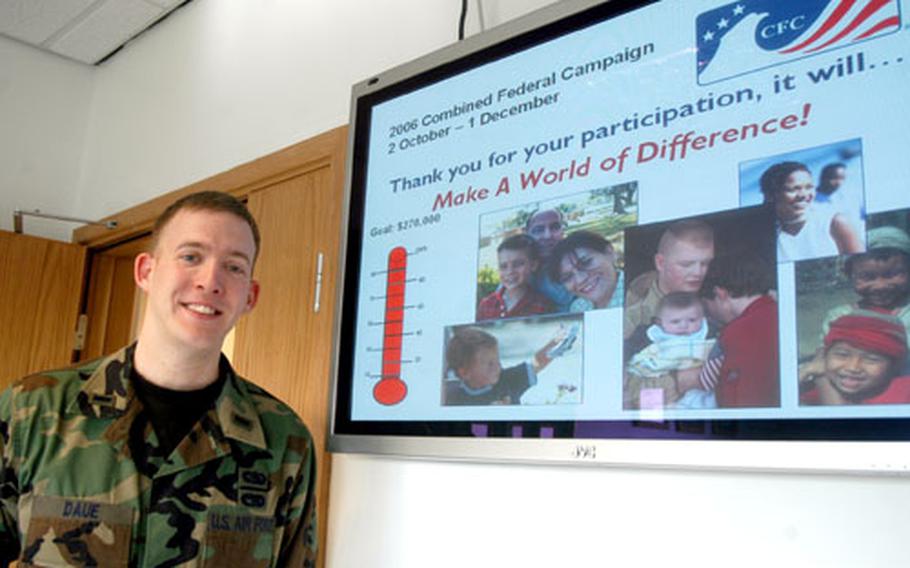 Midway through this year&#8217;s Combined Federal Campaign on RAF Mildenhall, 1st Lt. Matt Daue stepped in as coordinator to make sure the base would meet its goal of $270,000.

The 26-year-old, with help from many others, got the base to pull in enough donations to squeak by the goal with more than $272,000. And even though the campaign officially ended on Dec. 1, last-minute donations are being accepted until Friday.

What is the Combined Federal Campaign all about?

It&#8217;s basically an opportunity not only for servicemembers but also civilians working for the federal government to give back to the community through a variety of charities.

What did you do as the CFC coordinator?

Originally, Capt. Sean Brazel started the CFC [here], but [he] was accepted to the Squadron Officer School. I took over midway just to continue what he built up. I was responsible for about 60 key workers, guiding them and making sure that they had the tools to give people a chance to donate.

I couldn&#8217;t have done this without my right-hand man, Master Sgt. Patrick Faulkner. He was pretty much the one who got in the donations and logged in the results.

How did you get the base to exceed its goal?

Between Sgt. Faulkner and I, we really attacked the situation. We did more of an active approach to the key workers, and it sounds like it paid off.

What was the biggest donation?

How many base personnel donated to the CFC this year?

Did you donate this year? If so, what charitable organization?

Yes. I usually donate to the Red Cross.

Why do you think bases should continue to hold these CFC campaigns?

Even if it&#8217;s $10 a month or $1 for the entire year, contributions like that make a difference. There are so many good things that come out of the campaigns. It supports world efforts.