Getting Personal: No boundaries for craftsman behind Mildenhall's framing shop 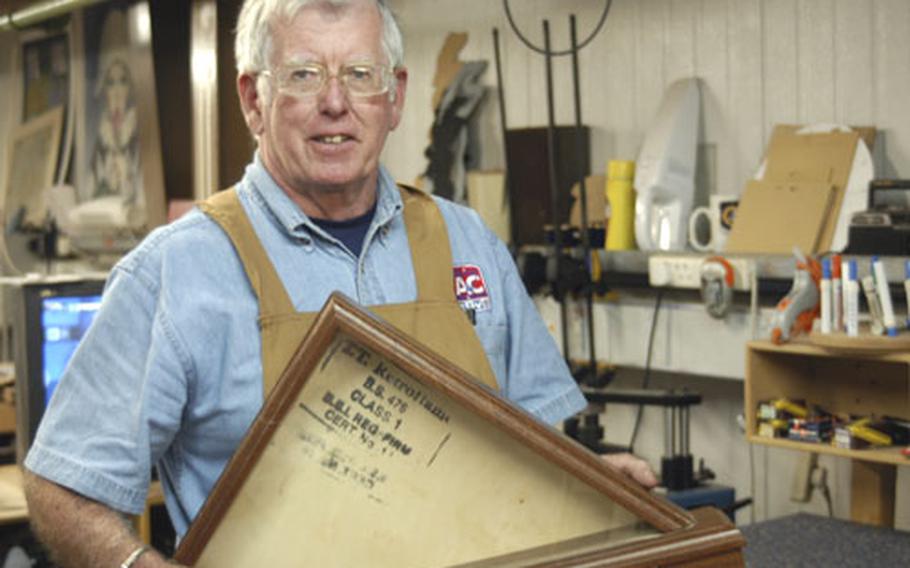 Jim Coleman has been running the framing shop at RAF Mildenhall for 19 years. Before his work preserving memories and keepsakes, the 68-year-old Cambridge, Mass., native served for 28 years in the Air Force. Coleman served as a jet engine mechanic before he retired as a senior master sergeant in 1985. Stars and Stripes caught up with the skilled artisan as he crafted a wooden bust of the United Kingdom for the 352nd Special Operations Group.

You&#8217;ve been working here in England for nearly 30 years. What is it about this place that keeps you around?

I love it. I just love the easy lifestyle. And when you get off work on Friday you have all weekend to explore Europe.

I have been going to London since 1971 and I still find new things to see and do. I never get tired of exploring.

It was real good when I was in. The guys today have it much tougher.

You have a lot to do with fewer people. And they keep cutting more people. It&#8217;s not good. You&#8217;re going to have to hire more civilians to do everything.

What was your most memorable experience from your Air Force career?

How does that war compare with the war in Iraq?

It looks like you stay busy here. How many frames do you pump out each week?

I average about 20, but I do a lot more than just frames. I do shadow boxes, flag boxes. I do almost anything people want.

What is the strangest thing you&#8217;ve ever crafted?

Nothing is really strange to me, but I have done some spears, swords and a bow and arrow. And I did a boomerang a while back. That was different.

You work three days a week and have no supervisor. How did you pull that gig?

I am the framing shop. Monday, Wednesday, Friday, I am here, and Tuesday and Thursday, I golf. I have a good boss who lets me do what needs to be done.

What is your favorite part of this job?

I know it sounds silly, but I just like to help people. I get satisfaction out of doing a job that someone else appreciates.

Any plans to retire?