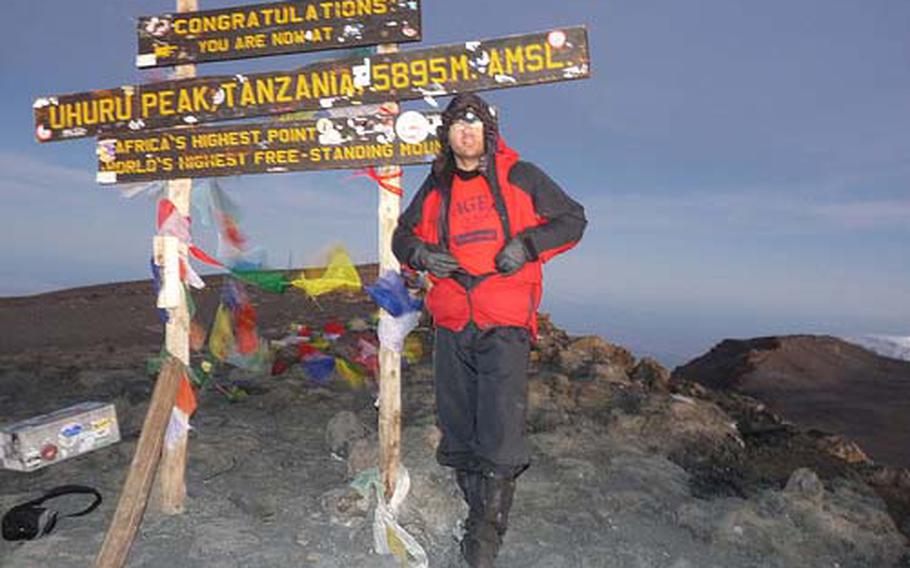 Mike Domstead, a civilian contractor at RAF Molesworth, stands on the summit of Mount Kilimanjaro. It was minus 5 degrees F on the 19,300-foot peak in Kilimanjaro National Park, Tanzania, when Domstead reached his goal. (Courtesy of Mike Domstead)

Mike Domstead, a civilian contractor at RAF Molesworth, recently scaled Mount Kilimanjaro in Tanzania. But the trek was more than a personal challenge for Domstead, a 36-year-old native of Oklahoma. He also used the climb to raise $500 for Age Concern, a British cancer charity in Knaresborough, Yorkshire.

So wow, you climbed Kilimanjaro? How long have you wanted to do that?

I&#8217;d been talking about it for over a year with my family. And you hear people talking about "doing it someday," so I actually made that "someday" happen.

How did you get the idea to make it a charity climb?

I&#8217;ve climbed peaks in Britain and a lot of people here do it for charity, so I wanted to tap into that. And the charity I chose, which is from my (British) wife&#8217;s town, is a little different from other cancer charities because it&#8217;s for elderly people.

I&#8217;ve always known about Kilimanjaro. The fact that there&#8217;s snow-covered peaks with jungle on the bottom is so interesting. I&#8217;d just always wanted to do it. &#8230; The other thing is that it&#8217;s one of the only big mountains in the world that doesn&#8217;t require a lot of technical training. You don&#8217;t need ropes and picks and proper rock-climbing skills to make it up.

So you trained on your own. Was it enough?

Yes, you have to be pretty fit. But everybody&#8217;s different and you don&#8217;t know how you&#8217;re going to react to the altitude until you get there and at that point it doesn&#8217;t matter where your fitness level is. &#8230; I definitely had some headaches. I didn&#8217;t suffer from a lack of fitness just more from the altitude. ... But, actually our Tanzanian guide gave us three tips: Eat plenty, drink plenty and be happy. And that&#8217;s what we did. He was basically saying you have to keep a good attitude. You don&#8217;t want to stress out, you want to enjoy it.

It was a mixture of seeing a new place and pushing through each camp. You&#8217;ve got spectacular views, but it&#8217;s a mixture of pain and bliss all in one.

What was the toughest part?

How long did it take?

What was it like when you finally reached the summit?

The panorama from the top was amazing. There was a really good view at one of the other peaks called Mawenzi, where you could see into Kenya with the valley and the clouds beneath you.

Everybody keeps asking me that. This was one of those big ones to check off the list. The biggest thing I need to do is take my wife somewhere without a mountain.