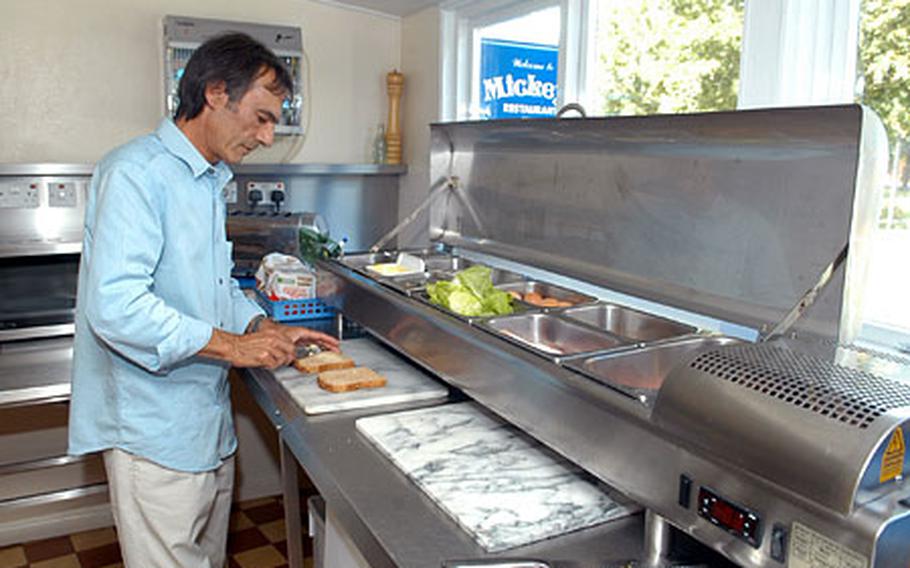 Malcolm Thompson, owner of Mickey&#39;s restaurant on RAF Mildenhall, prepares a sandwich last week. The restaurant has been around for more than 50 years, surviving financial setbacks as a result of gate closures following the Sept. 11 attacks. (Sean Kimmons / S&S)

More than 50 years ago, Mickey Thompson opened Mickey&#8217;s, a mobile food trailer propped up outside RAF Mildenhall to appease hungry and parched troops.

The trailer eventually grew into the establishment it is now, found along the Lincoln Road roundabout, while the air base expanded and surrounded it from both sides.

Although Mickey is no longer here today, his son, Malcolm, has continued the family-run business despite huge financial setbacks following the Sept. 11 attacks.

Malcolm estimated that the restaurant, which serves burgers, sandwiches and British favorites, lost 40 percent of its profits after Mil- denhall sealed its gates, putting the restaurant out of reach from many of its regulars.

For Mickey&#8217;s to survive, Malcolm had to cut his overhead and change his menu to tailor more to potential American customers on base, he said.

What&#8217;s your specialty? Fish and chips, tuna specials and our breakfast as well.

Who usually rolls in here? Is it a mixture of Brits and Americans? All sorts. Military, people who work for the Ministry of Defense, office workers and retirees.

Has your establishment been affected by the gate closures following 9/11? Before 9/11, we were open to everybody. In those days, this was a main bus spot. We used to get downtown trade and aircraft enthusiasts in here.

How much worse is business now compared to the days before the extra security measures? It dropped about 40 percent.

How is this place better than other on-base eateries? I think we give a very good personalized service. We&#8217;re family run. I think that&#8217;s where we win over customers. We have a lot of regular trade because we get to know the people.

Do you only accept British pounds? We accept dollars and pounds. Our rate is the best rate on base. We&#8217;re running $1.90 to one pound conversion at the moment. It&#8217;s kind of a discounted rate.