Getting Personal: Mildenhall bowling center relies on Frania to keep the ball rolling 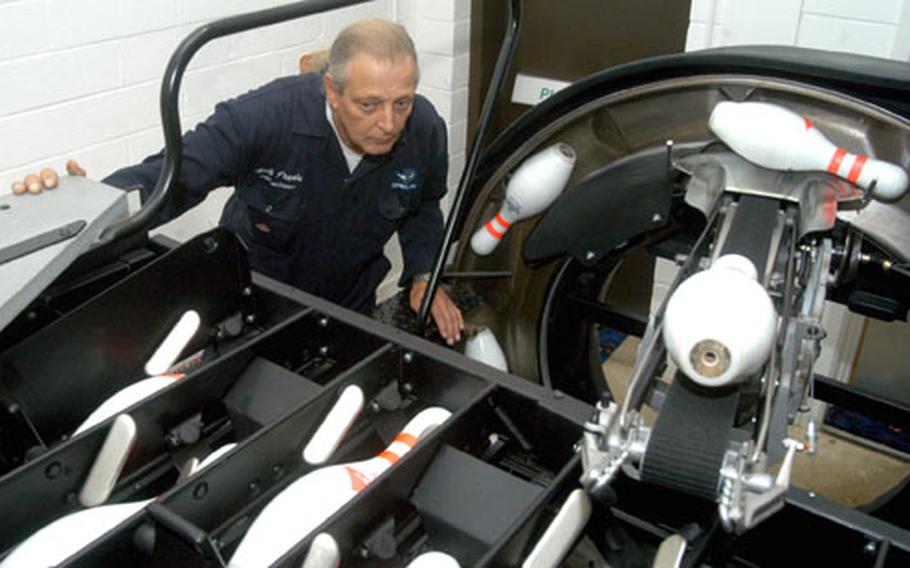 Andy Frania isn&#8217;t a bowler, but he has spent a good portion of his life inside a bowling alley. The Dallas, Pa., native works as the chief mechanic at RAF Mildenhall&#8217;s alley, where he helps maintain almost $1 million worth of bowling equipment. The 57-year-old is responsible for inspecting the equipment regularly, applying coats of oil to the alley&#8217;s 12 lanes and fixing any flaws on the new AMF 90XL pinsetter machines.

Why it is important to have oil on the lanes?

The reason why we condition the lanes, No. 1, is to protect the lanes. The better they are taken care of, the longer they last. No. 2 is that the oil helps [bowlers] try for a perfect game.

No, no, no, we&#8217;re talking about specially designed oils that have taken years to perfect. We have a Kegel oil machine, approximately worth $18,000. It washes the lanes, and it oils the lanes at the same time.

You ever fall down on the slippery lanes?

No, because we usually don&#8217;t walk on the lanes. We push the machine out to the approach and it automatically does it by itself.

Do you get a little startled when you&#8217;re working on a pinsetter machine and a bowler throws a ball at the pins?

Well, yeah. A few months ago, a guy in England was under one of these machines and got killed by kids messing around with the machine. But on the other hand that was partially his fault, because he didn&#8217;t disconnect the vital parts before he got up in there. We don&#8217;t take risks in this building. Safety is first, always.

Does it get loud back there with the machines while people bowl?

Yes, it does when all 12 machines are going. We do have ear protection, and we use that quite often.

Do you think the bowling alley is a good outlet for entertainment on base?