Getting Personal: Mildenhall airman came oh-so-close to meeting the president 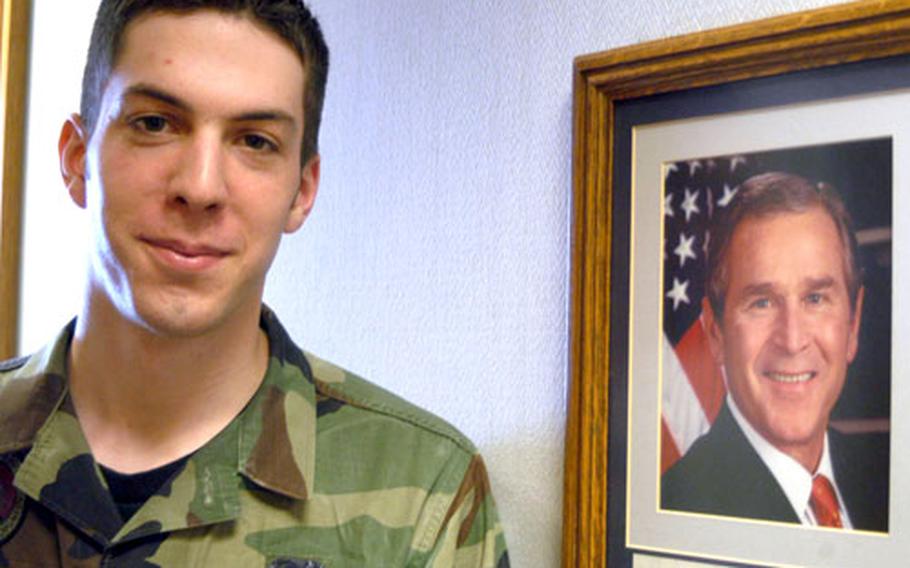 In the hierarchy of brushes with celebrity and greatness, a chance encounter with the president of the United States is pretty high up on the list. So when Air Force One landed at RAF Mildenhall last Tuesday night at about 11:30 p.m., ferrying President Bush back to the States after his trip to Iraq, Airman 1st Class Michael Bottari hung around to see if he could meet him. After setting up a secure phone line for the president in a distinguished visitors&#8217; lounge, the Saratoga Springs, N.Y., native found himself within 10 feet of Bush, forming the basis of a story that will always have the title, &#8220;The time I almost met the president.&#8221;

Set the scene for us from the moment you almost met the president.

At the time, I was just admiring the plane, seeing how big it was and trying to imagine what it was like inside for real. Then I look over and everybody&#8217;s coming out, just a group of people, mostly Secret Service in casual clothing with M-9s strapped to their leg. [The president] had just gotten into an SUV and drove from the passenger terminal to the plane. So I only saw him for a brief moment as he got into the SUV.

What&#8217;s the atmosphere around a presidential visit?

Everybody that doesn&#8217;t really see Air Force One or him very often, that doesn&#8217;t work with him, was very excited. People brought their cameras. I was just lucky to be on standby for that. He is surprisingly stealthy. We were all standing by the window, watching for him. Waiting and watching, waiting and watching, and we never saw him come out [of the plane]. We were pretty impressed with that.

Would you describe him as ninja-like?

Is he taller or shorter than on TV?

He is shorter than on TV.

What was he wearing? Suit? Jogging suit? Clown suit?

He was wearing his Air Force One jacket, a blazer, very casual black with a button-down of some kind.

If the moment had materialized, how were you picturing the presidential handshake?

Do you think he&#8217;d give you a double-hander? Maybe a shoulder clap?

Probably just a stand straight up in front of me, one hand, quick up and down and that would be it.

Did you have anything planned to say?

I would be speechless if I were to meet him.

Have you almost met any other current or former U.S. presidents?

No I have not, not even close. They don&#8217;t usually come up to upstate New York.