Getting Personal: Menwith Hill’s Stan of all trades 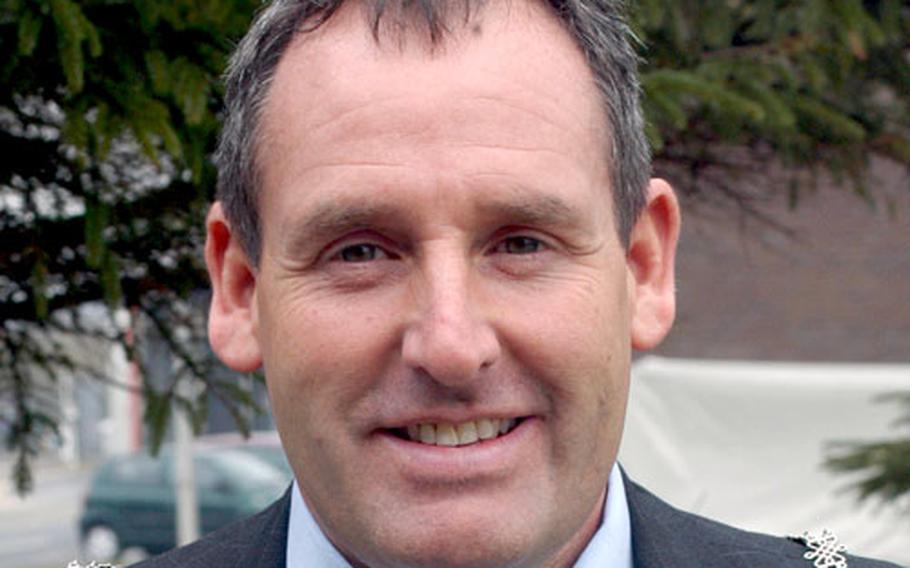 A lot less mayor: During Stan Lumley’s first term as head of Pately Bridge — one of the many things that keeps him busy — Lumley lost more than 100 pounds to raise money for a town pool. (Ben Murray / S&S)

Stan Lumley wears so many hats he has to duck under doorways. Just look at the titles: chief of base maintenance at RAF Menwith Hill, mayor of the small town of Pately Bridge, lead singer of a four-man rock band.

He&#8217;s the local dignitary who in turn rides a hot-rod motorcycle, attends official dinners and does a righteous Ozzy impression. As an added activity, in his first term as mayor he raised money for a town pool by shedding more than 100 pounds. The man&#8217;s busy.

What do people call you here? Do they call you mayor?

No, very rarely, only on official appointments and invitations. I&#8217;m just regular Stan.

What are the similarities of being the mayor of Pately Bridge and the head of maintenance here?

Let me rephrase that then. What are the differences?

I don&#8217;t know, I mean work is work I suppose, you come and do your job and get the job done. The benefit of being mayor is obviously you get invited to lots of nice luncheons and meet all sorts of different people, and it&#8217;s nice to be able to represent your community.

But if the sewer backs up here or in Pately Bridge, people call you, right?

Yes, initially they would do, yeah, but the difference is here I&#8217;ve got to get down and deal with it ... whereas there it would be dealt with by the local authorities.

Were people joking with you about your weight loss?

Yeah, a nice round figure, literally. At the time we were trying to build a swimming pool at Pately Bridge, so as part of that venture we had to raise, locally, a certain amount of money. So I knew that by being mayor I would be invited to all these wonderful functions where there&#8217;d be lots of nice food and wine, etc., so I thought I&#8217;d turn it on its head. I decided I&#8217;d do something called &#8220;slim to swim,&#8221; which was an idea to lose weight during my year as mayor in office &#8212; sponsored &#8212; to raise funds for the swimming pool. Over that year of office I lost over 100 pounds, 111 pounds, I think it was.

What was the highest pound-by-pound sponsorship you got?

It was the mayor of Harrogate, I believe, who jumped in right at the start and offered me a silly figure; it might have been as much as five pounds per pound. I don&#8217;t think he realized how determined I was.

Were [sponsors] getting nervous?

So is this going to become some type of racket, where you stuff yourself for two years and become fat and then make a bunch of money?

Do you go for an outfit? Put your black leathers on?

No, no. Well, I wear a leather jacket.

Do you get into Kiss makeup?

No, none of that good stuff, nothing like that at all. But we really, really do enjoy it. In fact, we&#8217;re playing this Friday night.

Well, you&#8217;ve got quite a lot going. Sort of the singing mayor of base maintenance. And is that all?