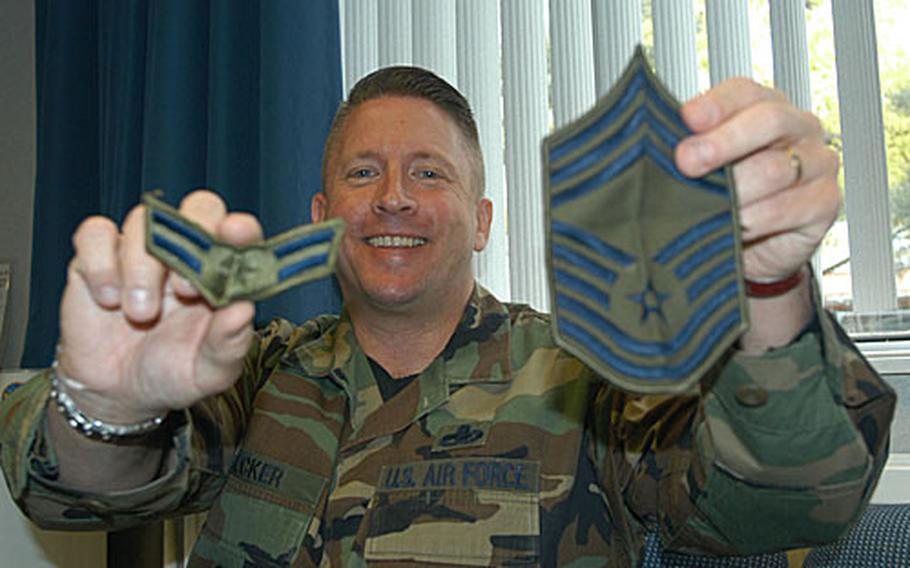 Master Sgt. Matthew Becker holds the first of his Air Force uniform patches and the chief patch he aspires to, to remind him of where he&#39;s been and where he hopes to go. (Bryan Mitchell / S&S)

His efforts in the organization were recognized by his peers when he was named Europe&#8217;s top member at a recent convention. Stars and Stripes recently caught up with the 37-year-old from Mount Prospect, Ill.

You&#8217;re very enthusiastic about the Air Force Sergeants Association. Why are you so pumped? It&#8217;s a group dedicated solely to the needs and interests of the enlisted airmen. We&#8217;re a group that works hard to make sure the airman&#8217;s interests are pursued in Congress.

What type of interests? They lobby Congress for tax breaks for airmen and work for concurrent receipt [of military retirement benefits and Veterans Affairs disability compensation] so that injured troops are taken care of after they leave the Air Force. [Airmen are] doing a lot of nontraditional roles and we need to make sure the people in Congress realize that.

You&#8217;re the president of the Mildenhall chapter. What do you do locally? During Christmas we had a party for local special-needs kids and their caregivers. And we recently helped raise $120,000 for the East Anglia Children&#8217;s Hospice. We are also a big part of the Mayfair Bazaar.

It&#8217;s no big secret you love the Air Force. What about the Big Blue does it for you? It&#8217;s true. I love it. When I retire they are going to have to get a tow truck to drag me out of here against my claws. It&#8217;s about goals and knowing where you want to go. That&#8217;s why I always carry two patches with me, the first one I wore and the chief patch. It keeps me humble and they represent where I&#8217;ve been and where I want to go.

You mind if we mix it up a bit and give the readers the out-of-uniform Becker? Of course.

One more time, why is it important to be part of the Air Force Sergeants Association? Only 23 percent of Congress has served in the military. They don&#8217;t understand what it&#8217;s like for today&#8217;s enlisted troops. The sergeants association works on our behalf so they don&#8217;t forget.