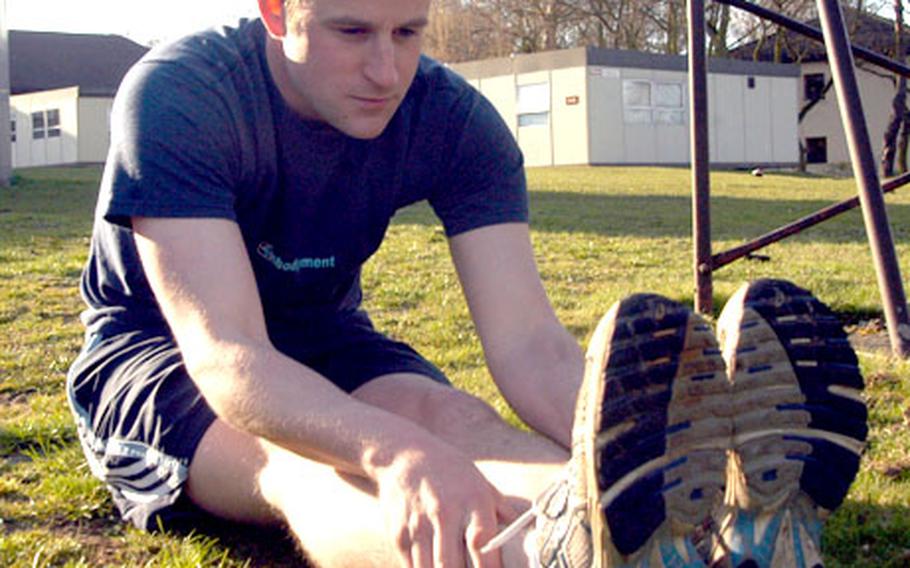 Senior Airman Jeremiah Moore, 22, stretches before a run around RAF Lakenheath. Moore said he runs about 20 to 30 miles per week. (Bryan Mitchell / S&S)

Senior Airman Jeremiah Moore was born in Vancouver, British Columbia, and raised in Texas. The 22-year-old dual citizen is a competitive long-distance runner who is competing in the Athens Marathon in Greece this fall.

The 48th Fighter Wing airman talked about his pastime during a warm-up for a run around RAF Lakenheath.

The London Marathon is one of the biggest in the world. Why are you not running in it?

I&#8217;m not really into city running at all. I prefer to run in the country or away from all the congestion.

How many miles do you run per week?

How did you decide to run marathons?

I have always been a long-distance runner, but I really got into it when I was deployed to Al Udied [Air Base, Qatar]. I had a lot of time on my hands and really got addicted to being off by myself running. I love that runner&#8217;s high you get.

How many pairs of shoes do you go through each year?

I normally get a new pair every three months.

People push themselves pretty hard in these races, sometimes too far. Have you ever been puked on during a race?

I have never been puked on, but I did catch a loogie to the leg during the Air Force marathon in Dayton, Ohio. It was totally unintentional, though. I just kept running.

I love that episode of &#8220;Seinfeld&#8221; when Kramer gave the marathoner a hot cup of coffee instead of water. Have you seen that one?

How do you stay motivated, I mean, between mile 12 and 23, how do you keep focused?

I like the fact that I&#8217;m pushing my body to the limit. The last race, I found my limit and that felt good.