Getting personal: Lakenheath instructor gets students charged up about electric car 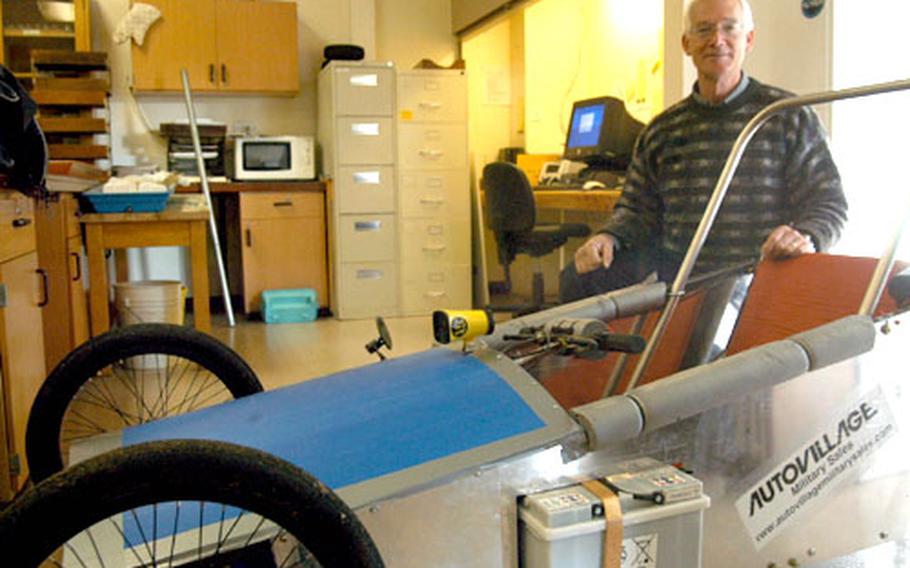 Lakenheath High School science teacher Garrett Billington heads a project to produce a student-built electric race car that can compete against English teams on professional racetracks. Made of Styrofoam, duct tape, bike frames and a car battery-powered wheelchair motor, the car has failed to finish its first two competitions &#8230; but a revamped version will be on the track next spring.

So, how fast can you get this baby rolling?

Really quite well, except you don&#8217;t really want to have the power on a sharp turn, because it&#8217;ll get up on two wheels.

Has anyone ever hit anything with this car, like, an animal in the road or maybe a &#8230; wall?

Because it&#8217;s an experimental vehicle.

I had pictured a plug coming out of the back &#8212; you just charge the batteries, then?

Yeah, you just take the batteries out and stick them into a regular battery charger.

Will those work in England?

Yes, because it just takes light, it doesn&#8217;t have to be direct sunlight.

Is it hard to be intimidating without a gas pedal?

Yeah, I guess there isn&#8217;t quite the testosterone.

What&#8217;s the biggest drawback to having to run on car batteries with a one-gear throttle?