Getting Personal: Lakenheath airman has a championship in his pocket 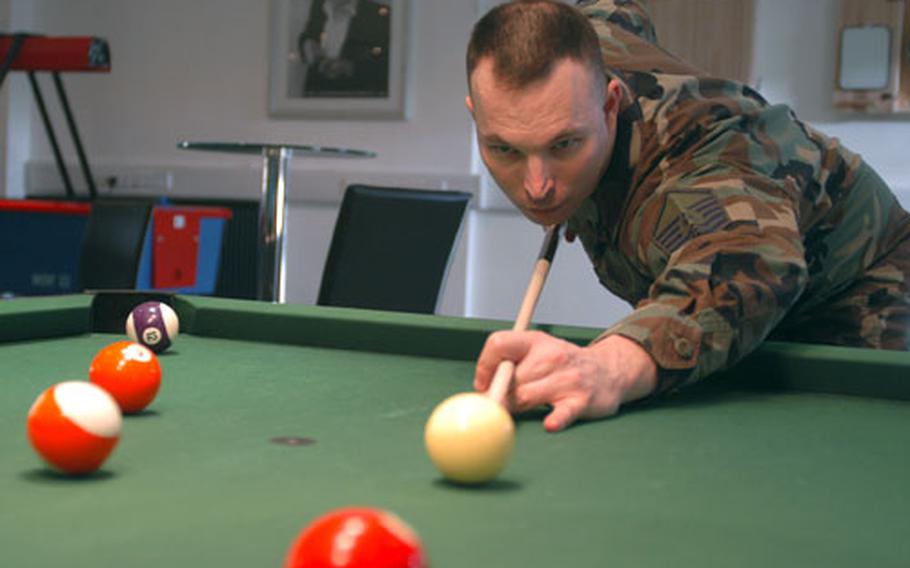 Master Sgt. Brian Bauer takes aim at a shot during a practice round at the RAF Lakenheath pool hall. (Bryan Mitchell / S&S)

Master Sgt. Brian Bauer is one half of the most dangerous pool team around. Along with teammate Tony Gonzales, Bauer recently captured the U.S. Air Forces in Europe pool tournament.

The customer service chief at the 48th Comptroller Squadron at RAF Lakenheath described the victory over the Spangdahlem team as more sporting coincidence than superior skill and acknowledged a bit of old-fashioned luck helped bring the crown back to the United Kingdom.

Stars and Stripes caught up with the humble 35-year-old Eugene, Ore., native at the RAF Lakenheath pool hall to get the scoop on the sharp-shooting noncommissioned officer.

How often do you shoot pool?

I usually shoot several times a week, but it goes through phases. Sometimes I shoot all the time and sometimes less, but normally about two to three times a week.

How did you meet your teammate?

We met around here, just shooting pool, but we weren&#8217;t on the same team until this year.

How do you complement each other?

My mental game is very strong. If I miss a shot, I don&#8217;t let it get me down. And I am very confident that I can make just about any shot. He is more into strategy and can see the whole game.

How long have you been shooting pool?

I&#8217;ve been playing since I was 15 at the pool hall down the street from where I lived, but I have loved the game ever since I saw it on TV when I was 5. I knew I wanted to play it then.

What was your prize for winning the USAFE tournament?

The team split $400, and we each got a week&#8217;s accommodations at any Services lodging facility anywhere in the world, so that is pretty cool.

How long have you been in the Air Force, in England?

I have been in the Air Force for 15 years and here at Lakenheath since November 2004. I really like my unit here and the competition for pool is good, too.

What do you do when you are not winning pool tournaments?

I like to play online poker. I like sports and to travel. I have been to Scotland and all over England. Stonehenge was amazing. The mystery of it all.

Online poker, Texas Hold&#8217;em; that stuff seems to be everywhere now. You like all the parlor games?

Both games I like because it&#8217;s a matter of wits. Both pool and poker require a good strategy to win. I could never sit at a casino and play the slots. I never get satisfaction from beating a machine.