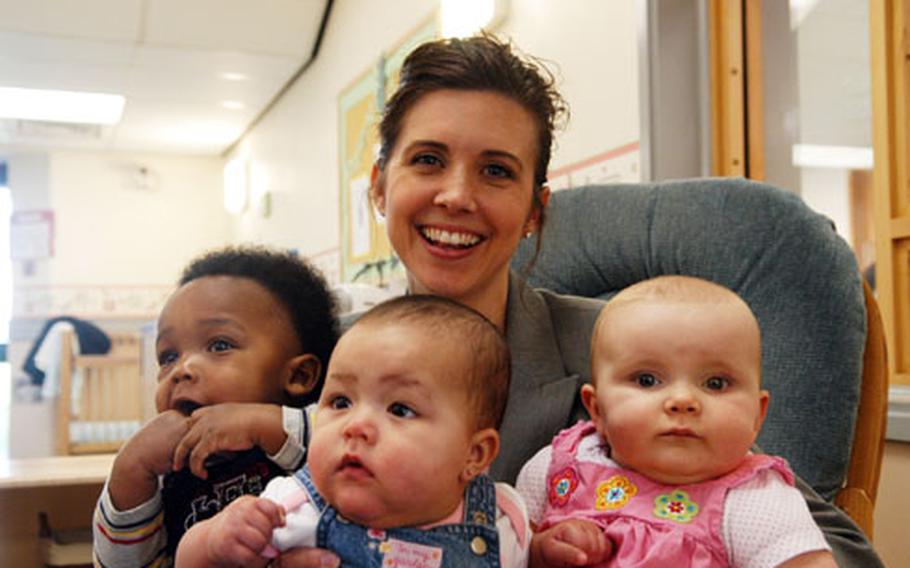 It might not sound like a big deal, but less than a year ago that waiting list had nearly 100 names of children whose parents needed day care.

In addition, over the last year the CDC added new rooms, increased its staff and is the first facility in U.S. Air Forces in Europe to receive accreditation from the National Association for the Education of Young Children.

Stripes sat down with Krista Thomas, the CDC director, Air Force wife and mother, to talk about the changes.

So the CDC here seems to be on the way up. What kind of changes have you all made?

The waiting list was huge, to start out with. We had 98 children on it when we took over here and made our management changes. So we sat down and started really looking closely at our rooms, how efficiently we were running the program. We&#8217;re fortunate here because it&#8217;s a fairly new center, it has plenty of space. So as we were able to hire more staff and grow our program, we were able to open new rooms. We&#8217;ve done that by looking at the waiting list, watching it and seeing exactly where our need is and we&#8217;ve opened the rooms to accommodate that.

What kind of rooms have you opened?

Within this community, what are the predominant needs in child care?

Obviously, based on the waiting list and what we&#8217;ve had to do to keep up with that demand, the need has been infant care.

Is that pretty common to most military communities?

Absolutely. It&#8217;s always the infants. And infant care is a little harder for CDCs to manage because the ratios [between employees and babies] are lower and there&#8217;s a lot of them (babies).

It&#8217;s a little more difficult. In an infant classroom it&#8217;s eight children. In a preschool classroom you can have 24. You can accommodate the older ages much easier than the babies.

Have the new rooms cut into the waiting list?

We have zero on our waiting list this week. It&#8217;s a huge accomplishment, and it&#8217;s something that is fluid. It&#8217;s always, always changing. We report zero on the waiting list today, tomorrow two people could walk through the door and we&#8217;d put them on the waiting list. But it&#8217;s manageable now. When you have 98 people on a waiting list, those people are waiting a very, very long time. And that&#8217;s something that I watch continually. That&#8217;s when I know to open a new room. When we see people waiting, four, six, nine months for space, we know we need a new room. And we need to start planning for that.

What did it take to cut that waiting list down?

We&#8217;ve increased our staff by 28 percent in order to do that. Part of that has been getting out in the community and talking about the opportunities we have for employment here.

The military child-care system is set up on a career path. It&#8217;s a wonderful opportunity for spouses, especially because as they move from base to base, they take all that with them. They can start out here in an entry-level position. We provide the training for them. And when they move to another base, they take all that with them, their training and their pay and they go to that next base at the same level. It&#8217;s really for the right person who wants to do this as a career and is willing to get their experience and education. They could literally move from an entry-level position to a management position with no problem.

Is it hard to find people for these jobs, or is it outreach?

Our outreach has helped tremendously. We speak at newcomers briefs, and we work closely with the Airman and Family Readiness Center. It&#8217;s a matter of getting the word out there.

To learn about career opportunities at the Mildenhall Child Development Center, call DSN 238-2042.