Getting Personal Insignia on his mind 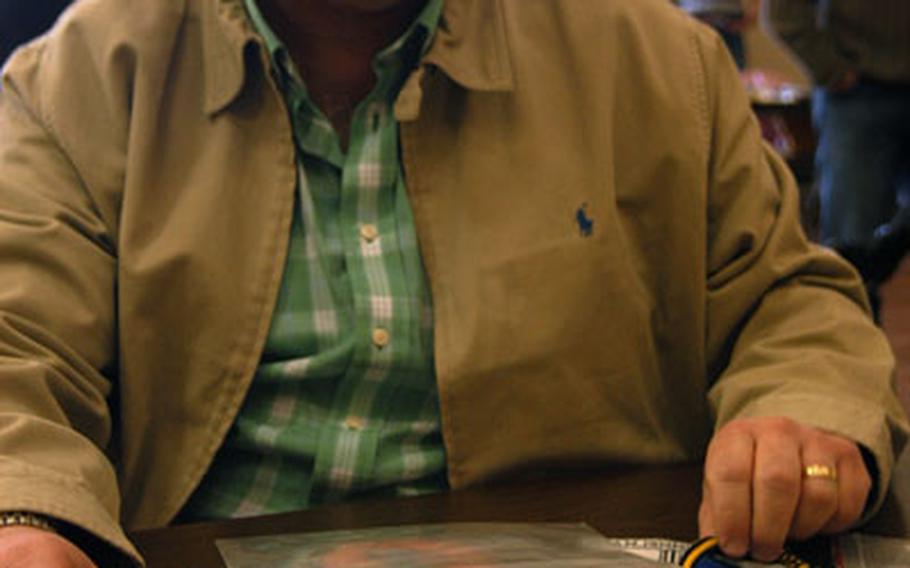 Ian Warner from the Mildenhall Military Insignia Collectors Club, fans out some of the patches he brought to display and trade at a recent swap meet at the Mildenhall Jubilee center. (Ben Murray / S&S)

It almost sounds like a shady operation. A small group of men with an avid interest in a common product, meet to trade, buy and sell their wares in handshake deals and delicate agreements. But in reality, it isn&#8217;t illicit &#8212; not when the product is unit patches from Air Force squadrons.

For 15 years, Ian Warner has been part of the Mildenhall Military Insignia Collectors Club, a small group that meets several times a year to swap patches and insignia, often from extensive collections. Now the coordinator of the group, Warner said club members focus on U.S. Air Force patches, though he doesn&#8217;t see many U.S. airmen at the meets &#8212; a shame because collectors are always looking for new pieces.

A keen collector, Warner is hoping for more U.S. involvement at the group&#8217;s June 22 meeting.

What do you have more of, patches or miles on your car?

Miles on the car, just about, I think.

So how many do you have?

What makes a patch particularly valuable?

It can be simple things &#8230; limited quantity, the nature of the patch &#8212; the design does make it more desirable, the coloration of it. Or it could be a particular unit that is more sought after and more collectible. A Lakenheath squadron or a fighter squadron, very highly sought after. Age doesn&#8217;t particularly make a patch &#8212; if it&#8217;s 50 years old doesn&#8217;t necessarily make it rare.

Is there sort of a holy grail of patches out there?

Probably some of the early fighter/interceptor units from RAF Manston or RAF Bentwaters, from the 1950s. There&#8217;s one in particular, the 81st Fighter/Interceptor Wing. I only know of one in existence.

Do you own it?

Do you have a favorite of your own?

Do you have a nickname either among people here or among your family, like &#8220;Patchmaster?&#8221;

Oh yeah, there&#8217;s some pretty big business that goes down here. Some of these patches are worth four, five hundred dollars apiece.

If someone wants to start building a collection, what should they do?

Is this a good setting for me to meet young, attractive women?