Getting Personal: Husband and wife work together for fundraising bazaar 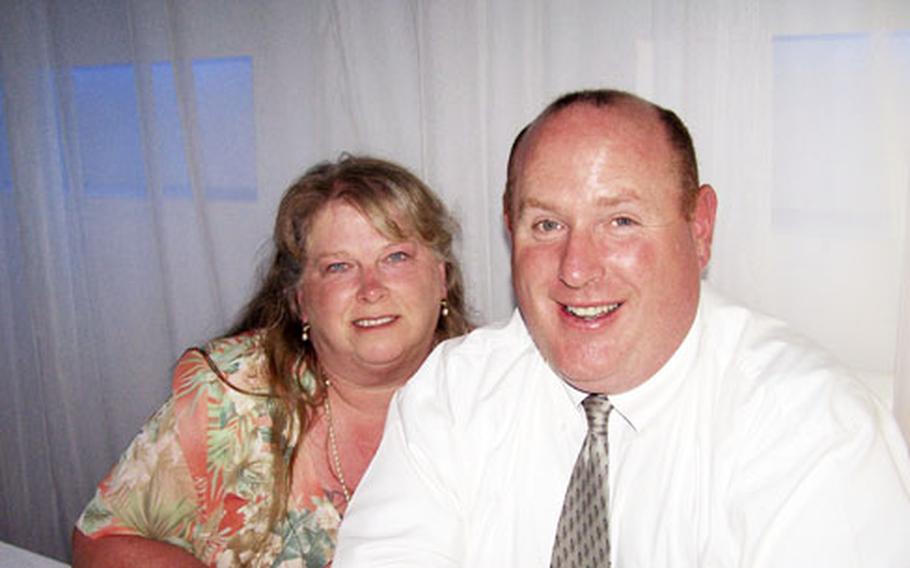 Terry and Sandra Buxton co-chair the committee that has organized this year’s RAF Molesworth bazaar. The bazaar will feature more than 50 vendors from all over Europe. (Courtesy of Terry Buxton)

The RAF Alconbury Enlisted Spouses Club and Officer and Civilian Spouses Club are teaming up again for this year&#8217;s RAF Molesworth Bazaar to raise $5,000 in scholarship money to help graduating high-school seniors and to raise money for the clubs. The bazaar, which runs March 27-29, is expected to feature arts and crafts and other goods by vendors from across Europe.

Terry Buxton, with the OCSC, and his wife, Sandra, a member of the ESC, co-chair the committee that organized the bazaar.

What are you and your wife&#8217;s role with organizing the bazaar?

My wife is part of the ESC, and I am part of the OCSC, and each year, since we do a combined type of bazaar, both groups get together and have co-chairs. Sandra and I are the co-chairs. The co-chairs basically oversee the whole bazaar, every function of the bazaar &#8230; they are like the CEO. It is a group effort.

How much money do you expect to raise with the bazaar?

How does the money raised at the bazaar help graduating seniors?

What we do is, we supply $5,000 off the top ... toward a scholarship fund and then any money left over from the $5,000 after we pay our bills is divided up among the clubs.

What are some of the more interesting items that will be on sale at the bazaar?

We have Abdullah the carpet guy &#8212; he sells Persian rugs. We even have Joanne Smith, who brings olives and Mediterranean foods and curries. Her olives are to die for. We got another group called Maybe Bears and they sell cuddly little bears, handcrafted greeting cards, stuff like that, ceramics and a few other things.

Where do the vendors for the bazaar come from?

All over the place. Abdullah comes from Germany, around Ramstein. We used to have a cheese guy who came from the Netherlands. We have Boo Boo Designs, who have baby and children gifts. They are coming out of Ramstein. We got three or four antique furniture guys, and they come from around the U.K. Right now, we have 52 vendors.

What kind of turnout do you usually get for the bazaar?

It depends on the publicity. Friday nights is good with the ID cardholders from 4:30 p.m. to 7:30 p.m. We are the only bazaar that is open to the British public (on the bases).

How many years have you been doing the bazaar and how has it changed over the years?

My wife, this is her sixth year, and this is my third year. What has changed over the years is how we get around with the 9/11 stuff and the security stuff. We have had a lot of the same vendors, but we get some new vendors.

How many volunteers does it take to put together the bazaar?

Where is the bazaar held?

It is always held at Molesworth in Hangar 92.