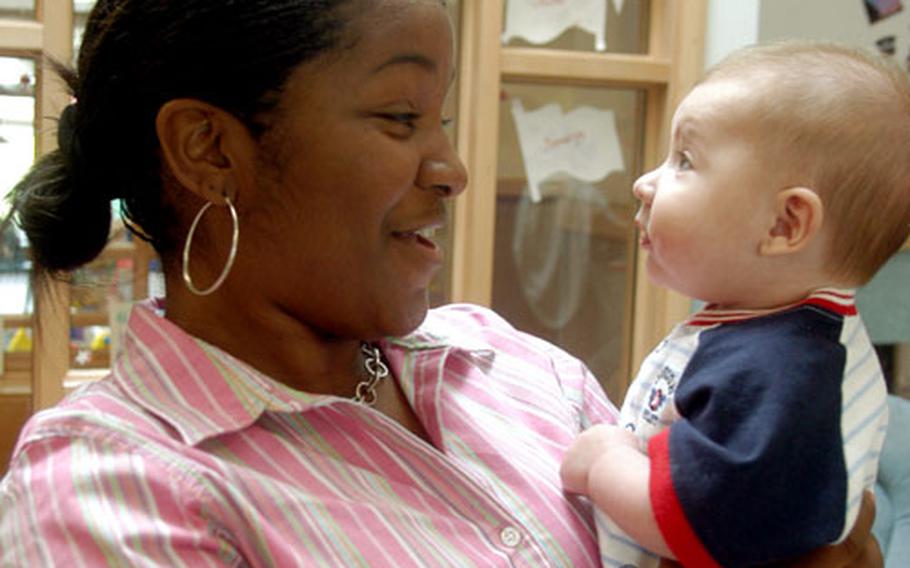 Latoya Suber, a program technician, cradles 4-month-old Jimmy Elliot at RAF Mildenhall’s Child Development Center. Suber has been working at the center for more than five years and knows that child care is not just about changing diapers. (Sean Kimmons / S&S)

Latoya Suber knows that being a child-care provider is not all about changing diapers and wiping noses, even though she&#8217;s done plenty of both while working at RAF Mildenhall&#8217;s Child Development Center. The Cleveland native is a program technician at the center and she believes that child-care providers play a vital role in a child&#8217;s development, since they practically spend the whole day with them, teaching them social and motor skills, among other things. For more than five years, Suber has worked with children at the center. She is currently in charge of the infant child-care room, which provides care to kids between the ages of 6 weeks and 6 months.

What&#8217;s the best thing about being a child-care provider?

Watching the children grow. Seeing them develop and mature, as they get older.

The only bad thing, I would say, is when children go off and move.

So, you&#8217;re telling me that the worst thing is not changing diapers?

On average, how many soiled diapers do you change in one day?

If I were by myself in a room, I would say probably about 40 diapers a day.

Wow! You must think that child care is a messy business?

It can be at times. You got noses to wipe and some things come out of everywhere. You got to clean all that up. [laughing]

What sort of things do you do if a child is misbehaving?

We do redirection. If we see some children arguing over a toy or something like that, we redirect them to another toy.

I&#8217;ve never had an incident like that. Screaming at my age group is common.

Has anybody given you a timeout for misbehaving?

I would probably need some every now and then. [laughing]