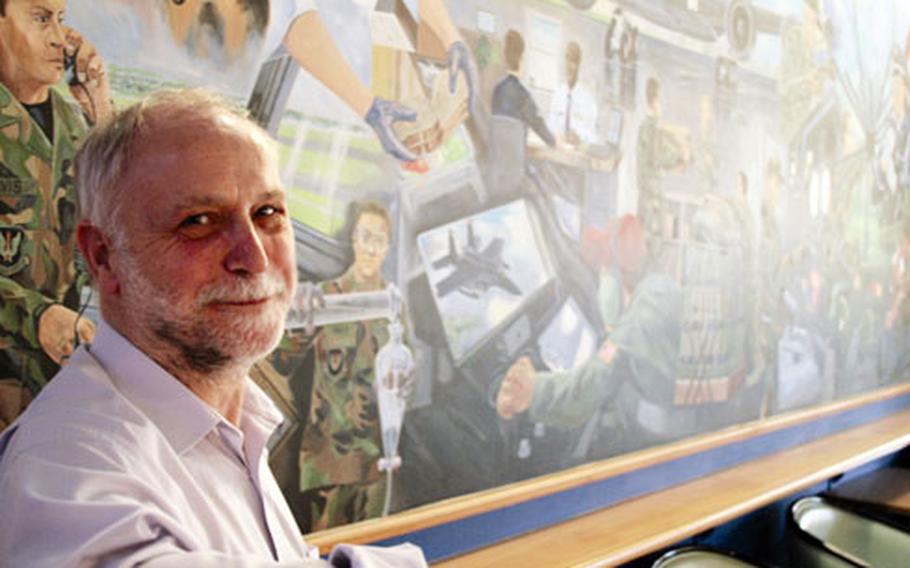 Geoff Pleasance is an honorary American, of sorts. Inspired by World War II-era military operations in Britain during his youth, the artist and Suffolk native has been painting pictures for, and of, the U.S. Air Force most of his life. The 67-year-old recently finished a mural at the Galaxy Club at RAF Mildenhall that honors the service&#8217;s enlisted corps.

So where did your passion for painting American aircraft and airmen come from?

I was born in 1942 and grew up in the shadow of World War II. For the children of that generation, the history was very real. I don&#8217;t have any visual memories of the American airplanes (during the war), but I remember hearing them and asking my mother what they were. My father took me to my first American air show in 1949 and that&#8217;s when the bug bit.

(Going to the air shows is) something we always did. And like any boy, I fell in love with all things mechanical. &#8230;

Years later, when I was looking to sell my work, the American air bases were here and that&#8217;s how I got into it all those years ago. I&#8217;ve been lucky to get work from the Air Force all these years. I&#8217;ve done murals and painting for different squadrons (at RAFs Mildenhall and Lakenheath), but I more commonly work for individuals.

You seem to have an appreciation of American culture. What do you like about us Yanks so much?

Working in the American community is more like an Ameritocracy. I&#8217;m a kid from a farm and we still have something of a class structure in British society. &#8230; There&#8217;s an openness and friendliness about Americans that I enjoy. &#8230; If you interact well with the community, it&#8217;s as if you&#8217;re allowed membership to the club.

So have you ever gotten to fly in one of the aircraft you&#8217;ve painted all these years?

So what is it about airplanes that sparks your creativity?

It&#8217;s a combination of engineering and aeronautics but also the aesthetics. When you see an airplane in the sky, you think, "That&#8217;s just not right." But the people that make everything happen are just as interesting.

So where can people buy your work or commission you for a piece?

I set up as a concessionaire in the [base exchange] a few days a week. (Also on the Web at: www.avart.co.uk.)