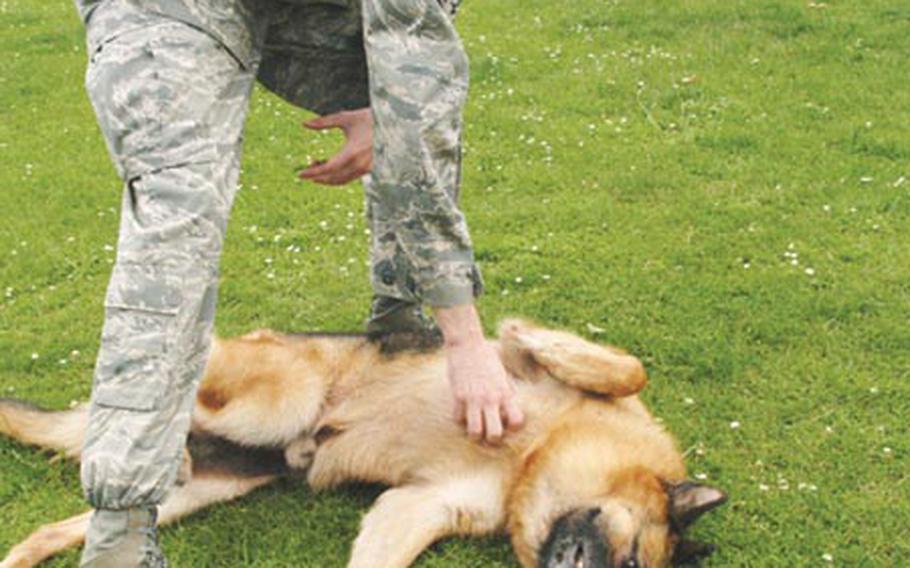 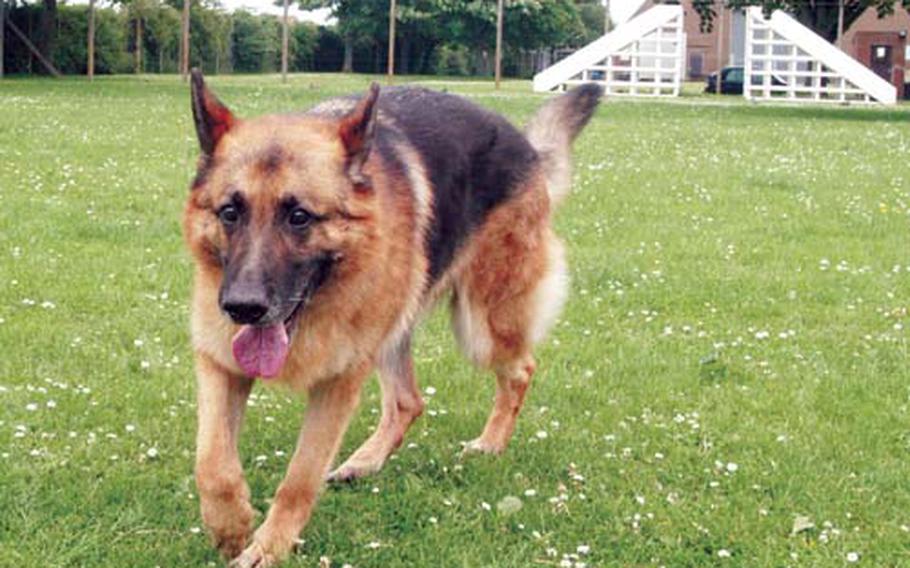 Whiskey, a 9-year-old German shepherd, gets some exercise outside the 48th Security Forces Squadron kennel on RAF Feltwell. The military working dog is set for retirement later this summer because of hip problems. (Sean Kimmons / S&S)

The German shepherd currently chills out at the 48th Security Forces Squadron kennel on RAF Feltwell, where he is pleasant company for Tech. Sgt. Chris Beavers.

Beavers, the kennel master, served with Whiskey for a little more than a year starting in 2004 before the dog moved on to other handlers. His last handler, Staff Sgt. Kristyne Feldman, is planning to adopt the pooch.

Beavers recently sat down with Stars and Stripes to talk about Whiskey.

How did he get his name? Does he enjoy a glass of bourbon after work?

I&#8217;m sure he would. He likes to get into everything else. I watched him drink my Mountain Dew through a straw. How that was possible, I don&#8217;t know. Lackland Air Force Base [in Texas, where initial training is conducted for all military dogs] names the dogs. They have the weirdest and funkiest names you can think of. Whiskey just got lucky.

What&#8217;s the most memorable mission that you had with Whiskey?

It would be the four-day State Department tasking to London when [Secretary of State] Condoleezza Rice went down there. We cleared out her hotel room and secured her motorcades.

Has he ever deployed downrange?

Whiskey never deployed. For the most part he stays in this area. With him being an explosive-detector dog his main mission was to search vehicles for explosives.

Does Whiskey know any tricks?

He loves to attack traffic cones. When he sees a cone, he gets livid. [laughing] We don&#8217;t do too many tricks. He knows all the basic commands [and] he is attack-trained and explosive-detection trained.

Will the guys miss having him here as a working dog?

He hasn&#8217;t really done a whole lot of working-dog missions lately. He&#8217;s really been our kennel mascot for the longest time because he has hip problems. I know I&#8217;m going to miss having him around because he keeps me company.

Does Whiskey qualify for any police pension?

And finally, let&#8217;s ask Whiskey a question. Whiskey, do you have any retirement plans?

[He looks up, pants a little, walks over to me and rubs the right side of his back on my leg. He then turns his head toward me, and with a beggar&#8217;s face, waits for me to scratch the other side.]