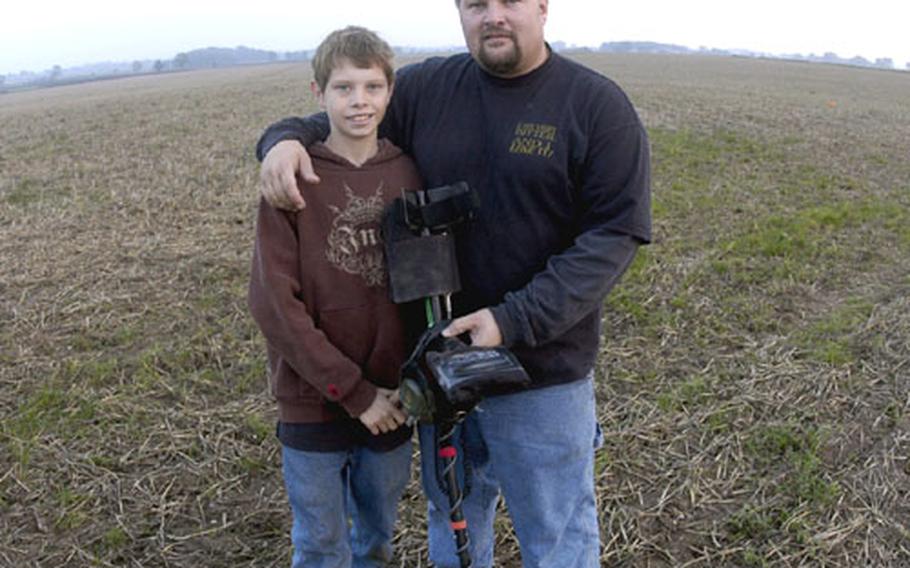 Jon and Steve Reese combed this field with a metal detector, along with members of the UK Detectors Net group. Steve has metal-detected for three years, and has found everything from Roman brooches to coins from the last century. (Jason Chudy / S&S)

Jon and Steve Reese combed this field with a metal detector, along with members of the UK Detectors Net group. Steve has metal-detected for three years, and has found everything from Roman brooches to coins from the last century. (Jason Chudy / S&S) 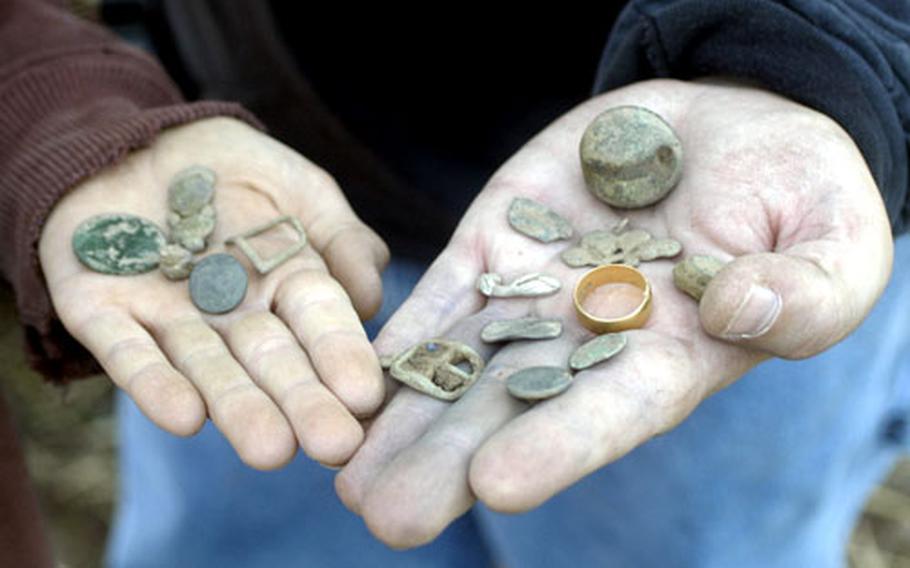 Steve and Jon Reese hold up their finds during a recent day of metal detecting near Birmingham, England. Besides various coins, Steve found a 22 karat gold ring and an old bell, a belt buckle and a small, detailed piece of silver. (Jason Chudy / S&S)

The 38-year-old native of Panama City, Fla., has been metal detecting for three years, including two years while at RAF Lakenheath, where his wife, Patty, is stationed.

Do you dig this hobby?

Yes, I dig and dig and dig and dig detecting. Detecting is a great way to unlock England&#8217;s rich history. There&#8217;s nothing like finding a coin that some careless Roman dropped out of his toga 2,000 years ago.

Is the United Kingdom a good place to metal detect? What&#8217;s out there to find?

The U.K. is the mecca for metal detecting. Finds can vary from Bronze Age ax heads and Roman jewelry to medieval-period hammered coins. More recent finds are commonplace.

Is this just a bunch of older guys wandering around in a field or on the beach? Sorry about the older guys crack, OK?

My whole family is involved in detecting. Here, because the potential to make significant historical discoveries is very good, you have people from all walks of life participating in the hobby.

The U.K. has an extensive network of clubs and organizations that relate to our hobby and has more people detecting, per capita, than any other country in the world.

Speaking of wandering around, how long do you spend metal detecting on your normal day out in the field, and would you consider this exercise?

Usually, we spend about six to eight hours in the field during the weekend and two hours a night, after work, during the summer months. It&#8217;s not conventional exercise, but it is definitely a workout.

What are some of more unusual things that you&#8217;ve found?

Have you metal detected anywhere else in the world? Where and what did you find there?

I detected for a few months when I was in the Navy stationed in Naples, Italy. It&#8217;s weird that the area I detected in Italy was two hours south of Rome but I&#8217;ve found more Roman coins way up here in England.

What goes through your mind when you start digging a hole and find something old or something gold?

Disbelief, then denial, then stunned silence and then awe.

So you wander around a field, swing something from your arm and reach into a hole every once in a while? Have you ever thought of giving up metal detecting and just taking up golf?

I&#8217;ve tried that. With my mad skills, I can easily lose a dozen golf balls per round of golf. Detecting is cheaper and it&#8217;s more enjoyable finding things rather than losing them.

If someone wants to take up metal detecting, what&#8217;s the best way to start?

I joined a Web site called UK DetectorNet [www.ukdetectornet.co.uk] and was welcomed with open arms. [The site] should be the first stop for anyone interested in metal detecting in the U.K.