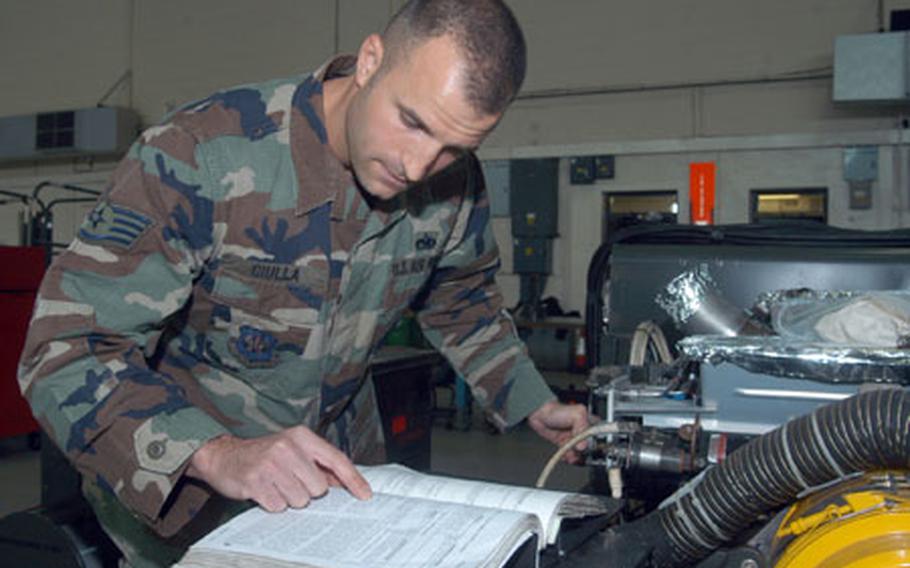 Staff Sgt. Joseph Ciulla, from the 100th Maintenance Squadron, refers to a manual as he inspects a gas turbine compressor. The Cleveland native said he was heading down the wrong path as a youth, so he joined the Air Force. Nine years later, he became Mildenhall&#39;s NCO of the Year. (Sean Kimmons / S&S)

Staff Sgt. Joseph Ciulla said he was heading down the wrong path as a youth, so he decided to join the Air Force.

Nine years later, the 100th Maintenance Squadron noncommissioned officer from Cleveland now manages a maintenance floor to ensure quality equipment, such as generators, are received on the flight line to support aircraft.

For his stellar performance, the aerospace ground equipment craftsman recently became RAF Mildenhall&#8217;s NCO of the Year. Not too bad for a once-troubled youth.

What makes you better than the rest?

I hate these kinds of questions. I guess it&#8217;s my drive and ability to manage people.

Some kids want to be a famous sports player, an astronaut or a firefighter. Did you want to become the NCO of the Year at an air base when you were a kid?

No. I never thought that this was actually going to happen. I&#8217;ve had events in the past that I&#8217;m not too proud of that I think have led up to me becoming the person I am now. I learned a lot from those events.

Why did you join the military?

I was going down the wrong path. In high school, I wasn&#8217;t into academics. I was into hanging out with friends and partying. I needed some sort of direction in my life and that&#8217;s what the Air Force gave me.

How were you evaluated in the competition?

It&#8217;s a board with senior NCOs and officers that look over your package. The package was based on your duty performance, off-duty performance and education, among other things.

No arm-wrestling category or wrestling cage match among the other nominees, huh?

Did you receive any hardware for winning?

Where did you end up displaying the trophy?

Can you defend the title next year or do you have to give it up?

It&#8217;s not really to defend, but it will be based on my duty performance if my supervisors want me to go up for it again.

I&#8217;m slotted to go into the programs office, which is a totally different aspect to my job. The programs office entails the deployment manager job that takes care of equipment that gets deployed, and training and safety.