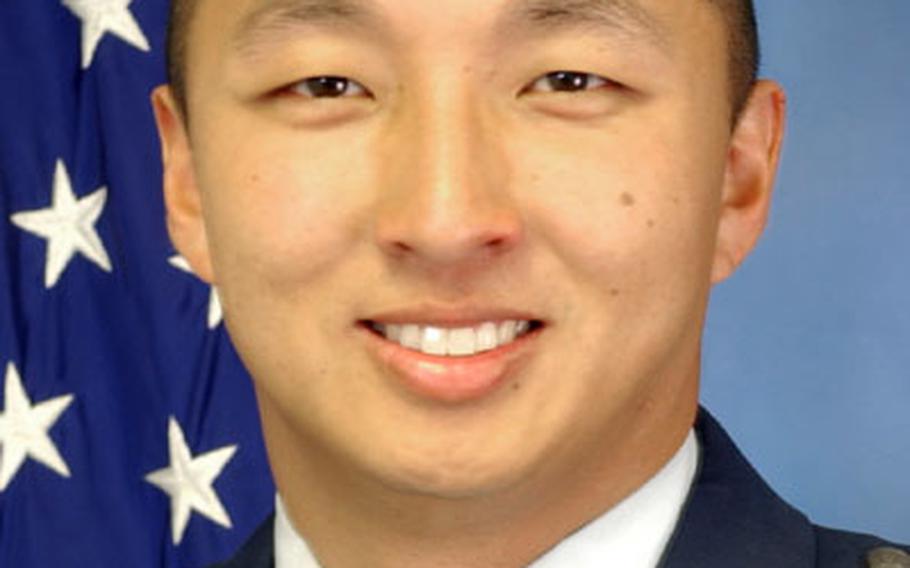 Capt. Brian Zajick has immersed himself in British culture during his time with the 422nd Communications Squadron at RAF Croughton, specifically, Oxfordshire pub culture. Zajick is part of a team in a local Aunt Sally league. Aunt Sally is a game in which players toss sticks and try to knock a doll off its perch atop a 4-foot rod. ()

If Capt. Brian Zajick of the 422nd Communications Squadron tells you he&#8217;s going down to the pub for a good, heated game of Aunt Sally, don&#8217;t look at him funny. The man is serious.

Dipping a toe into local British culture in RAF Croughton&#8217;s home county of Oxfordshire, the mission systems flight commander has become one of the few American players of a sport found almost exclusively in the area around the base.

Aunt Sally, played by eight-man teams mostly at pubs, is a game rife with muddled history and unique terms. The rotation of each team is called a &#8220;horse,&#8221; and the people picking the knob (doll) up after a point are the &#8220;stickers-up.&#8221; The doll sits on an iron rod as players stand behind a line known as the &#8220;hockey,&#8221; and throw wooden sticks at the doll, aiming to knock it off without hitting the rod. Each team tries to knock as many dolls off as they can in 48 throws (six each); best two of three wins.

A horse in Aunt Sally is all eight members of your team making six attempts to hit the doll off the iron. No idea why it&#8217;s called a horse.

Is there, at any point, an actual horse involved?

I&#8217;ve been told by my teammates that the origin is based on a gypsy woman long ago who sold voodoo dolls in the Oxfordshire area.

Well, they all talk about this guy down in Oxford called &#8220;The Legend.&#8221; He apparently hit 18 out of 18 on more than one occasion. There is actually a professional team that tours around from the league in Oxford as well.

I always throw in the five spot, which leads me to believe it&#8217;s like baseball and the five spot is the worst position. The best two players throw seven and eight, and a good player averages three to four dolls [per] round.

How hard is it to actually hit the thing without hitting the other thing?

My best round is four of six. My best match of 18 would be eight. Pretty pathetic.

Do you have your own sticks?

No, I use the pub&#8217;s sticks, but you can order them from several places online as well as in the shops in the area. There are also accessory bags and other niceties.

I understand there are also &#8220;stickers-up&#8221; involved in this game. Is it really that crime-ridden? How many times have you been arrested?

As an American who loves his sports with the threat of grievous bodily harm, do you think this has appeal for a lot of airmen or their family members?

Yes, I set up a team to play my local pub and both adults and children alike enjoy it. Since it&#8217;s outside, some teams bring families, dogs, cats, fish, etc.

What are your goals as a player?

Someday getting six out of six and winning the county championship again.