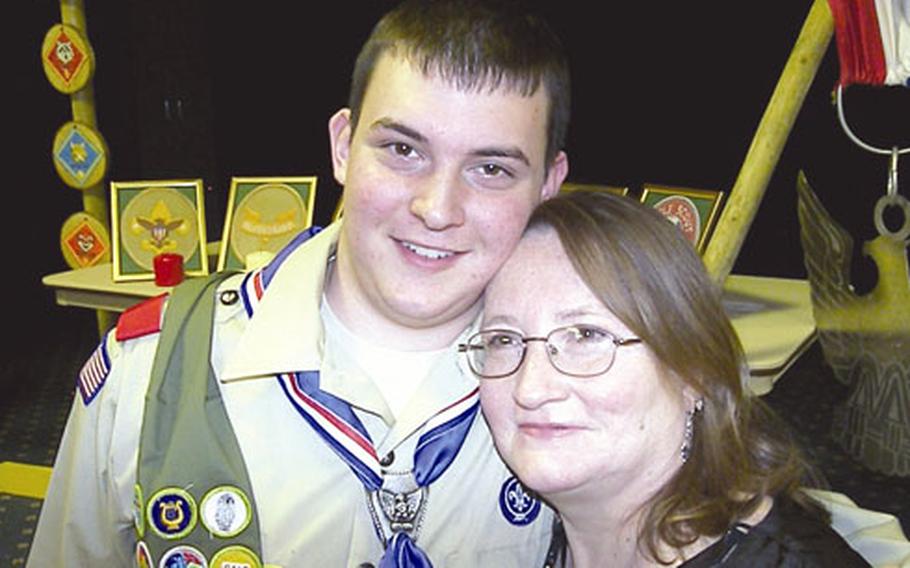 Cliff Carlson, 18, poses with his mom, Cindy, after becoming an Eagle Scout. (Courtesy of Cliff Carlson)

Earning the rank of Eagle Scout is more than just a one-time accomplishment for Cliff Carlson.

The high moral and leadership standards on which the honor is bestowed will stick with him forever, said the 18-year-old Alconbury High School senior, who recently earned the title as a member of Troop 245.

What was your project?

It was an installation of a notice board in my village (Alconbury) made from recycled plastic lumber.

They take recycled plastic products like bags and bottles and make it into a building material. It&#8217;s eco-friendly and lasts forever.

Are you concerned about the environment?

More so recently because climate change is becoming a big part of everybody&#8217;s lives.

What was the toughest part of the project?

It&#8217;s not just a matter of building it and putting it up. I had to lead a team and do things like meet with the village council to get approval. But I also had to raise funds, too, which was the toughest. Just making people aware of what I wanted to do and getting them to donate was hard.

How did you sell the project to your donors?

Most people who donated were Americans, so they knew what was going on. I explained how it benefited the community and was eco-friendly and just sold it on those main points.

Do you feel more connected to the community after the project?

Definitely. I&#8217;ve only been here five years, but the village has embraced my family in a big way. It&#8217;s almost like an ambassador sort of thing. I wanted to give back something to the community that has let me and my family live here. It made me feel good and close to the community.

What was the biggest lesson you learned?

What are the benefits of being an Eagle Scout?

It&#8217;s put me in a position to succeed. People look at you differently when you say you&#8217;re an Eagle Scout. It shows people you can set a goal and take the proper steps to get there. It teaches you about life, I think.