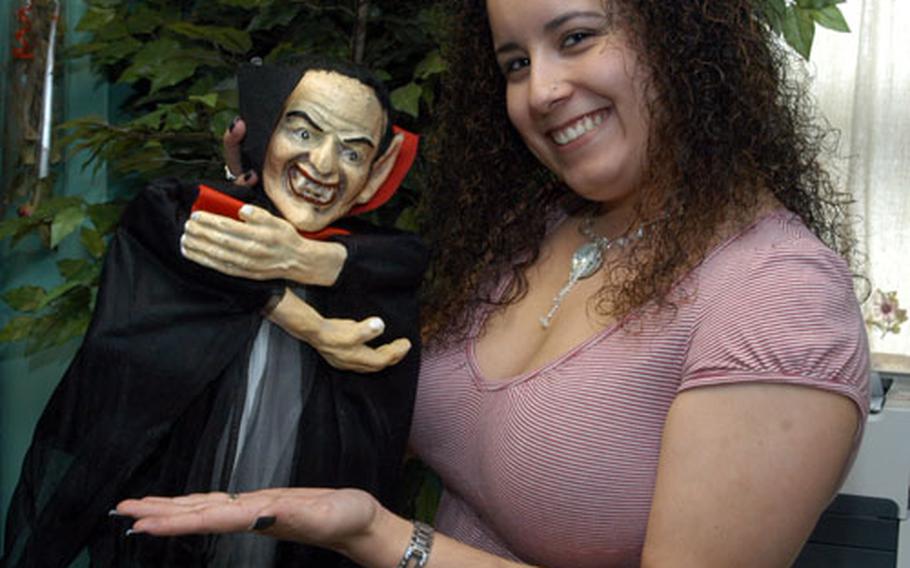 Cindy Soto poses with one of the decorations she plans to put up in the Galaxy Club as part of its Halloween festivities later this month. (Sean Kimmons / S&S)

Cindy Soto is looking to set a spooky mood with boxes of decorations for this year&#8217;s Halloween events inside the Galaxy Club on RAF Mildenhall.

Soto, a procurement clerk, is in charge of gathering prizes and decorating both the club&#8217;s Halloween Bash and Halloween Family Night later this month in honor of the scariest holiday.

The decorations shouldn&#8217;t frighten anyone out of the place, she said, but will help provide a festive atmosphere for the two events that were popular last year.

The adults-only Halloween Bash is from 10 p.m. to 2 a.m. on Saturday. Admission is free to Air Force club members and is $5 for nonmembers. The family night is scheduled for 5 to 8 on Monday. Prices are $7.95 for adults with a $1 discount to club members. Children cost $1.

Both events include prizes for the best costumes, giveaways and live DJs.

What will the prize be for best-dressed?

It depends. We&#8217;ll get DVD players and stuff like that. Kids can get toys for best-dressed and each kid will receive a goody bag.

How about the atmosphere for the family night?

A lot of people show up for all of our regular family nights. Kids enjoy themselves and they leave with a smile on their face. More than 50 people showed up to last year&#8217;s Halloween event.

Were there any cute costumes that kids wore at last year&#8217;s event?

Kids always look adorable in costumes. There was a scarecrow, clowns, mummies and witches. There was this one kid who went as the headless horseman. That one was pretty cool. His head was in his hand. He won the contest.

I remember trick or treating and getting scared. There was this one guy who looked like a dummy, sitting in a chair with a bowl of candy. As we approached the door, he jumped up and scared us. [laughing]

Do you know of any haunted places on base?

Are you a ghost believer?

Have you seen one before?

I have. It happened when I was a kid. I saw something in my attic and it wasn&#8217;t my imagination. We lived in a haunted house. [laughing]