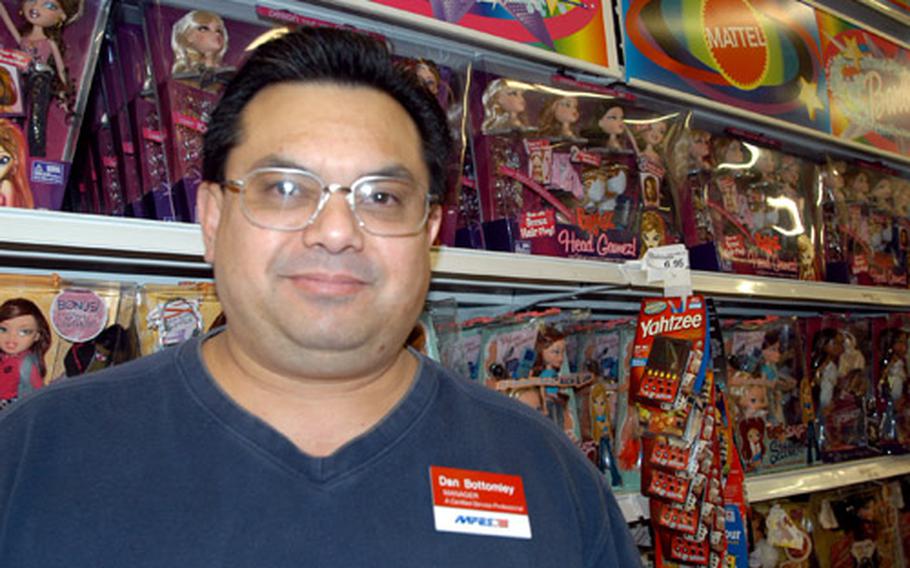 RAF Mildenhall BX manager Dan Bottomley says the popular Bratz dolls, behind him on the shelves, are selling well for the holidays. (Bryan Mitchell / S&S)

Dan Bottomley is a 49-year-old Washington state native who helps manage the BX at RAF Mildenhall, the home of the 100th Air Refueling Wing. The 20-year Army and Air Force Exchange Service employee talked last week about the Christmas rush.

What has this store done to prepare for the Christmas season?

It was held on the 16th of September, when we rolled out all the new selection of toys for the fall and Christmas season. It used to be a much bigger AAFES tradition, but we still do it big around here.

What toys have been popular with shoppers this season?

My Little Pony, Bratz and Robosapiens have all done extremely well.

Was there any surprise seller or something that just sold like crazy?

Some board games. The Army Monopoly game that we got by mistake. We are on an Air Force base here.

How does this store compare with other AAFES facilities?

We are No. 1 or No. 2 in a lot of departments. We are the second biggest toy store for AAFES in all of Europe.

Did you have to add a lot of staff to deal with the rush?

We added seven part-timers to the staff. Traditionally, we don&#8217;t add any, we just suck it up ourselves.

What about increased hours in the days leading up to Christmas?

We&#8217;ve actually decreased our hours this year because traffic has been a little lighter due to the deployments.

Will there be slashed prices on all these things post-Christmas?

No, not this year. We&#8217;ll be sitting pretty going into the spring/summer selection.