Getting Personal: Chief master sergeant was ready with an assist 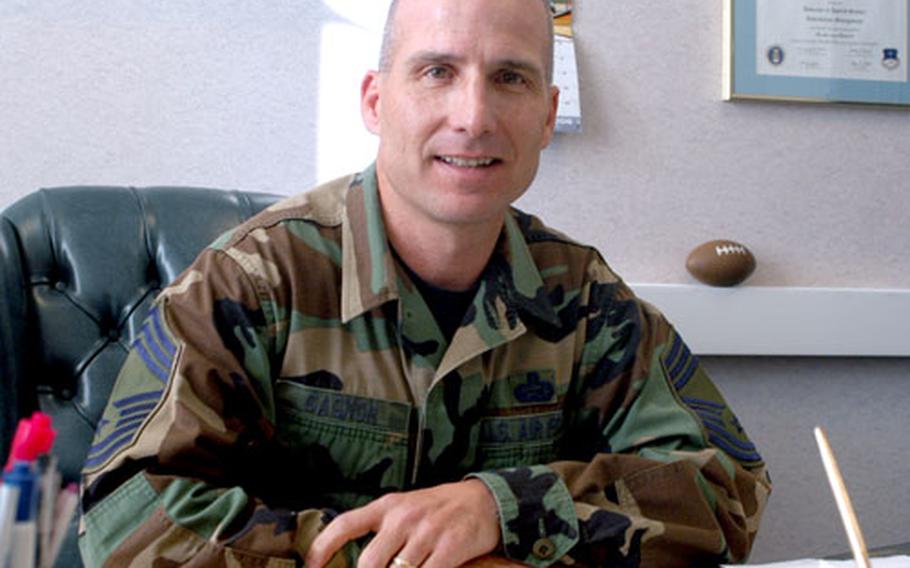 Chief Master Sgt. Mark D. Gagnon was recently at the right place at the right time. While on a shopping trip with his wife, Gagnon saw a young man having a seizure. The airman stepped up and administered aid to the young man. (Bryan Mitchell / S&S)

Chief Master Sgt. Mark D. Gagnon is superintendent of the Military Personnel Flight at RAF Mildenhall. Gagnon, 45, of Salem, Mass., recently intervened in a medical emergency during a Saturday shopping trip to Haverhill with his wife.

So, let&#8217;s start from the beginning. How did you get involved in this medical emergency?

We were on our way to go shopping when we pulled into a parking lot and saw a young African man struggling and his friends standing around looking very nervous.

So what did you do?

I ran up to see what was the matter. He was choking and having fits. It was definitely some kind of seizure and he was nearly choking on his tongue.

How did you assist?

I opened up his mouth and used my keys and hands to move his tongue and clear all the saliva out of his throat. He was close to choking on it.

What about the authorities?

I told his friends to go call 999. They came real quick, but it felt like an eternity.

They were just standing around. I just took charge to make sure the guy didn&#8217;t injure himself.

When is the last time you took a first-aid course?

I was in Iraq recently, and I took a course before I went and while I was there. You have mortars coming into the base sometimes, and you have to be ready to take care of your wingman if something does happen.

Is that what you take out of this?

You never know when something is going to happen, and you have to be prepared.

Have you ever had to do something like this before?

I was a lifeguard as a kid and had to go in after a few flapping kids. And I did have to give my son mouth-to-mouth when he was only 1 and was having some kind of a seizure from overheating or a fever. That&#8217;s very scary when it&#8217;s your own son.

What did your wife say to all this?

And did you complete your trip?

After that, we went out shopping for some curtains.