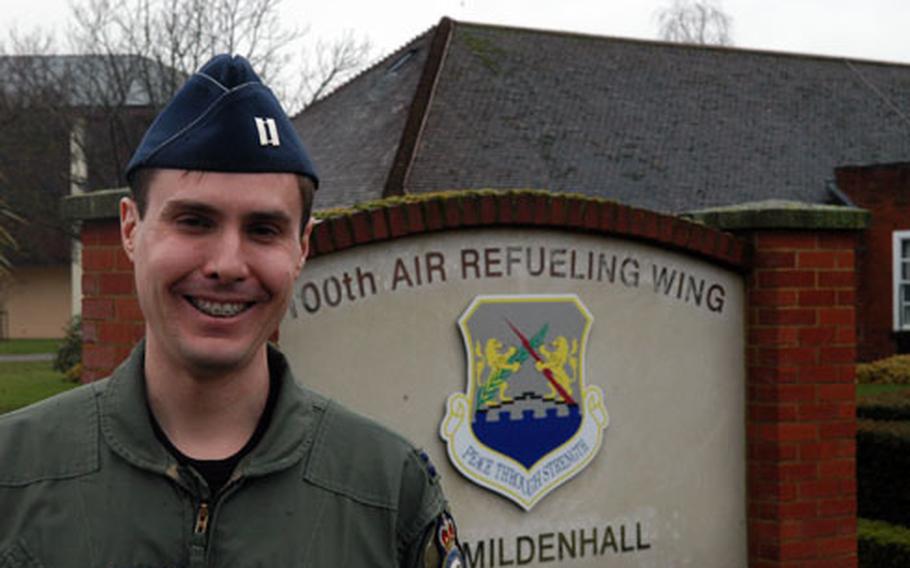 Sometimes it&#8217;s too easy in any career to do your job day in and day out, never paying mind to the broader area in which you work.

But Mildenhall&#8217;s Capt. Brent Toth has his eyes set beyond the KC-135 cockpit. The assistant wing inspections chief for the 100th Air Refueling Wing is also a member of the Airlift/Tanker Association, a private group that lets Air Force personnel of all ranks learn more about their field.

And recently, Toth, 30, was named a recipient of the group&#8217;s 2008 Young Leadership Award. He got to travel to California to attend an association convention, hobnobbing with all types of four stars.

Congrats on the distinction. When did you receive it and how did you find out?

I was awarded it in November and I found out about it three months prior to that.

Was it a surprise?

I was very surprised. There&#8217;s an award process, so I had to be submitted from the wing. And then I never really gave much consideration to winning it. Col. [Eden] Murrie [100th ARW commander] brought me in for a staff meeting and had me brief something. Then at the end she told me I received the award.

Aside from the accolades and recognition, do you get a plaque or a cash prize or something?

No plaques. I did receive a medallion that says "2008 Young Leadership Award" that I had to wear around [the A/TA convention] so that I was distinguished as an award-winner during the convention.

What do you see as the biggest challenges facing Air Mobility Command in general, airlift or tanker, going into the future?

Well, [the generals at the convention] talked about where AMC is right now, the process of trying to find a new tanker. And the fact that that&#8217;s caught up in a quagmire right now. It&#8217;s being worked on by the staff. That was one of the issues they brought up there, but also the fact that AMC is doing wonderful things every day. You look at what&#8217;s going on right now in Iraq and Afghanistan and how much support AMC is providing, and how to sustain that for the future.

How well-utilized are these professional associations, and what can AF personnel gain from joining them?

I&#8217;m currently the A/TA vice president at Mildenhall. I started that about 1&#189; years ago. I think there was originally a connotation that it was just a pilot organization. But we&#8217;ve tried to reach out and show it&#8217;s not just for pilots, it&#8217;s for everyone who&#8217;s interested in what we do at this base, air refueling and air mobility.

Are you still able to fly in your current position?

Not as much. I used to fly three times a week, but I&#8217;m an instructor pilot now. My currency requirements aren&#8217;t as much as they were, but I still fly once a week.

Do you miss flying more frequently?

Once a week is enough to stay current, but this has been a great opportunity. When you fly every day you&#8217;re of course focused on flying. You don&#8217;t realize the other half of the base that does some wonderful things.

I think the best thing is it&#8217;s a great mission. It&#8217;s very satisfying to go up there and refuel coalition and NATO aircraft. The bad parts, I really don&#8217;t have any bad parts about my job. I think my job is one of the best out there right now.