Getting Personal: Better fly right, because this Lakenheath NCO is keeping tabs 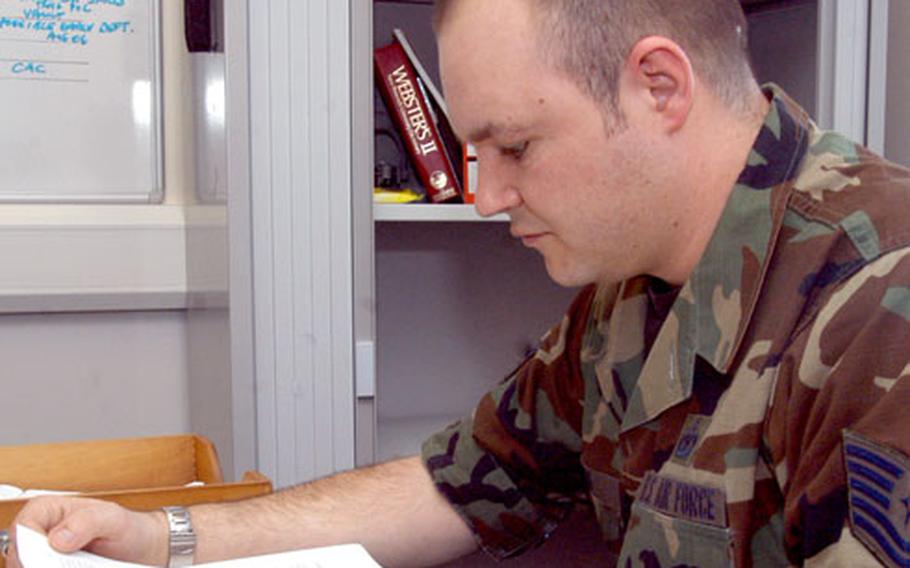 Named the 2005 Outstanding Aviation Resource Management NCO of the Year for U.S. Air Forces in Europe, Tech. Sgt. Clayton T. Raub says he turns down the opportunity to fly because he digs the ground. (Sean Kimmons / S&S)

Tech. Sgt. Clayton T. Raub is resourceful. That could be a good indicator of why he was recently named &#8212; get ready for this &#8212; the 2005 Outstanding Aviation Resource Management Noncommissioned Officer of the Year for U.S. Air Forces in Europe. In May, he&#8217;ll find out if he is the Air Force-wide winner.

Other than earning a ridiculously long award title, the 30-year-old from Lake Havasu, Ariz., knocks out his daily duties as the only NCO in the 48th Wing Scheduling and Training office.

One of his duties is to oversee the Aviation Resource Management System for USAFE, which tracks aircrew hours, among other things. Last year, he played a key role in the management of the $223 million Flying Hour Program at RAF Lakenheath.

Is there anything remotely interesting about your job?

A lot of it is computer-based. One part that I actually enjoy doing is working at the fighter squadron&#8217;s operations desk. We [get to] talk between maintenance and the aircraft on the radio and work out the flight plans over the phone with airfield operations.

Why is this aviation resource system important to keep running?

If the system tells us that aircrews are overdue on a training event, then we don&#8217;t let them step to an aircraft and fly. There&#8217;s thousands and thousands of different training events between all three squadrons that I oversee to make sure that they&#8217;re safe to fly.

Training events. You got your flying events, different types of sorties, bomb scores and ground-training events. We input them into the system, we audit the system and we analyze the data and provide it to our leadership.

Is there something on base where you guys get a day off if a certain number of sorties are reached?

Do you ever fudge the numbers, so the base can get a goal day?

Oh, of course not. (laughs)

Is it a complicated system or could anyone use it?

It&#8217;s built user friendly, but you would probably have to have training to understand what needs to be done on it.

Is it a big system? Are there a lot of computers hooked up to it?

No, you install it on a computer.

What does it take to be at the pinnacle of the Air Force aviation resource management arena?

Will the flyboys let you up in one of these F-15s?