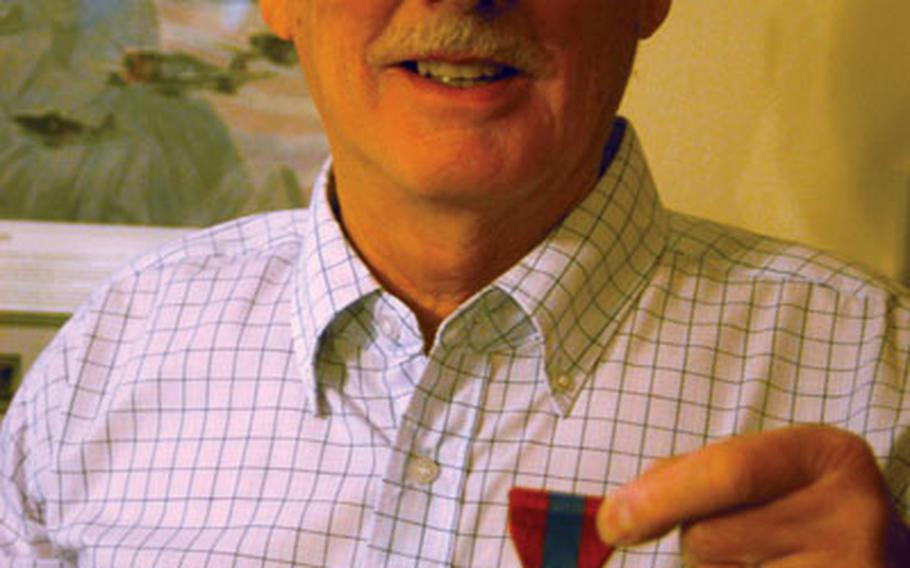 Barry Wells shows the Imperial Service Medal he received in September. The honor is given to those civil servants who have stuck with the job for more than 25 years. (Geoff Ziezulewicz / S&S)

To say that Barry Wells has seen RAF Lakenheath change over the years is an understatement. During his more than 30 years of employment as an engineer at the base, he has seen countless American co-workers come and go while the installation morphed into its modern incarnation.

In a gesture of gratitude for his service, the West Row resident was awarded the U.K.&#8217;s Imperial Service Medal in September, an honor given to civil servants who have stuck with the job for more than 25 years.

Wells was nominated for the distinction three years ago after retiring, but it took this long to clear all the levels of bureaucracy for approval.

So how long exactly did you work at Lakenheath?

What did you do?

Everything with engineering, heating, hot water and the radiators.

So everyone&#8217;s warmth was based around your shop?

How does it feel to receive a distinction like the Imperial Service Medal?

I feel really proud. It&#8217;s a nice medal and commendation I got. It was actually a surprise. I thought I was going up there for a photograph session. And there was the commander of [civil engineering] and the RAF commander, plus some family. That was a complete surprise.

You&#8217;ve been around the base for so many years. How has it changed?

When I first worked up there, until 10 years ago, we used to work just in our own group of civilians. Then we merged with the Americans to make CE. I made friends, but the shame is they go home after about three years, and you never see them again.

[Before 9-11], you could go anywhere on the base. There used to be a couple security guys on the airfield, but there was really no security at all. The first hours after 9-11, it took us about four hours to get on base.